College Chief Warrant Officer Marcel Chiasson, a Land Communication and System Technician (LCIS), came to RMC in 2008. He is originally from Cheticamp, Cape Breton, but was raised in Montreal from a young age. He was promoted to his present rank in 2003 and has two deployments to his credit – Rwanda in 1994, and Haiti in 1995.
by M0917 Dean Fleet

When did you join? Why?

I joined in September 1977. Seemed like a good thing to do. Learn a trade, get some experience while getting paid. I had absolutely no career plans or expectations at the time.

You have been here one year – what has surprised you the most?

I would say, the level of enthusiasm demonstrated by the majority of OCdts. For example, with the PPT, I am impressed that so many cadets are above the standard, they do not just try to meet the mark, they try to  exceed it.

First impressions of the college? Have they been altered in any way since you arrived here? 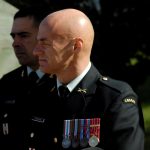 Like all NCM’s newly posted to RMC, I was in shock and it took me a few months to clearly understand the dynamics and the focus.  Unlike at other schools with which I am familiar, this is not an environment where we have three months of intense training to create a soldier. With all of the cadets other commitments, we have only a few hours a day to offer military training. The focus here is on academics, and the military aspect is here to support that side,  not remove valuable time from it.  Having completed my first year, I know exactly what to expect and will be able to engage even more in all College activities.

What do you see your role to be at RMC?

My terms of references at RMC are not that different from the duties and responsibilities of a Unit/School RSM:
– Advising the Commandant on matters affecting various departments including Cadet Wing;
– Maintaining close liaison with the DCdts and COS;
– Promoting a high standard of discipline, deportment, dress, drill and morale among all service personnel at RMC;
– Apprising the Cmdt on issues involving conditions of service, leave, quality of life, harassment, diversity, and the military justice system;
– Exercising sound leadership principles, promoting team building, and continuous improvement;
– Advising all junior, senior officers or academic personnel as required and;
– Monitor overall military activities such as drill and ceremonial events, and to initiate corrective action where necessary for both OCdts and NCMs

What at the college falls under your mandate?

Describe if you will a day in the life of the CCWO. 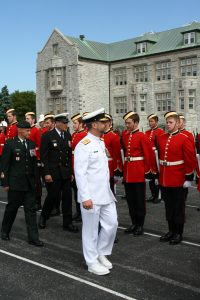 For the Summer months, I usually get up around 5:30 AM and go for a run, between 5 and 10 km, depending how I feel, hit showers, have breakfast (for the last 20 years consisting of 2 whole wheat toast, peanut butter, two bananas and orange juice), stop for a coffee and get to the office around 7:30. I pay my respects to the Cmdt on his arrival and do CCWO stuff until 10:00 hrs, when I walk over to the SSM for coffee and chat with the other NCM’s and Squadron Commanders in attendance – it is amazing what you can learn in 30 minutes. Then I’m back in the office until lunch at the SSM again. In the afternoon I will usually go for a walk around the College grounds and visit one of the many departments/organizations and get back to the office until around 15:30, 16:00 hrs depending on the day and drive to the gym for about an hour or two depending on my energy level and how many discussions I have with our cadets.

You are seen often at the gym (all hours). What is a regular workout for you?

I have been doing the same workout for almost 25 years. I know you should change from time to time and I tried but I always come back to the routine which is an hour of weight training and an hour of cardio. I try to split it weights in the morning and cardio after work or vice versa. The only thing that seems to change is the amount of weight I train with, not increasing with time.

I understand that you are in attendance with the extra PT in the mornings, can you talk a little bit about your impression of this early morning compulsory PT program?

I strongly believe that the leaders in an organisation such as RMC must be seen in order to get the buy in and full commitment from student and staff. I also believe that early morning is the best time to train and that it also serves as extra incentive to get in shape in order to pass the PPT. The results speak for themselves as over 80% of the attendees manage to pass the PPT throughout the year. I would like to thank on behalf of the OCdts and myself, Mrs. Erin O’Reilly, from the athletic department, for displaying such enthusiasm every morning and providing all attendees with the tools and training required to eventually achieve success in that pillar.

How long do you see yourself staying here?

Until the end of my termin 2011, which will give me three years at RMC

What if anything, would you like to see at RMC that is not done here now? If there is something – tell us what it is and how it would be implemented?

There is always room for improvement in any organization. However, in my view the College is an outstanding institution where OCdts are constantly challenged not only academically, but in many other areas such as physical fitness, second language, and leadership, while in a military environment. Is there a better way to start your military career and adulthood?