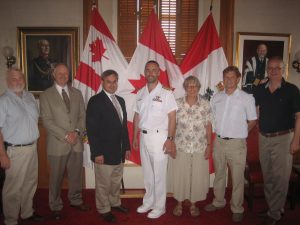 New commandant, Commodore Bill Truelove recently took advantage of an opportunity to meet informally with the Principal and the various RMCC Deans. Commodore Truelove has been busy making the rounds of the college and expects to touch base with most, if not, all the various departments within the next few weeks.

A 32 kilometer forced march, followed by a four kilometer canoe portage, an eight kilometer paddle and another 6km forced march for a total of 50 kilometers is what three RMC cadets and an ex-cadet are about to undertake in a month and a half. Some people wonder what kind of competition could include all of these physical activities because whether you like it or not, it is pretty odd… Well according to its organizers, the PSP staffs from CFB Petawawa, it’s an Ironman! This year again, this competition is bringing military personnel together on September 17th in order to complete this harsh journey through CFB Petawawa and the Ottawa River. They are expecting between 200 and 250 competitors.

This year will be the second time RMC is represented as a team. This elite team is composed of M0929 Geordie Cheeseman, 24687 Matt Southcott, and 22428 Kristin Topping under the leadership of 24610 David Felhounet. Only Cheeseman has completed the Ironman before and finished third overall last year with a time of 5 hours, 47 minutes and 54 seconds not too far behind from 22811 Tim Bowman who finished with a time of 5 hours, 39 minutes and 57 seconds. Other members might be added to the team seeing as over 20 other cadets gave their names to out team captain at the beginning of May. Since most of them have been training on their own, final cuts will be made by August 20, the final date for registration. 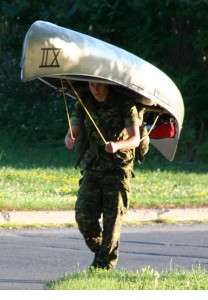 Our four local athletes have been training for months now and have been following a very strict training plan. A typical week of training is as follows:

Mini-Races are also undertaken sporadically, which incorporate the ruck run, portage and canoeing.

As this time, the team members are too busy with their training but they think they will get ‘bitten by the bug’ hard enough that they will be looking forward next year’s Ironman. In that case, they might be able to fight for a varsity status and start a new tradition at RMC! So far, the team is completely psyched about the competition. Let’s hope they keep this motivation and wish them the best of luck in Petawawa!