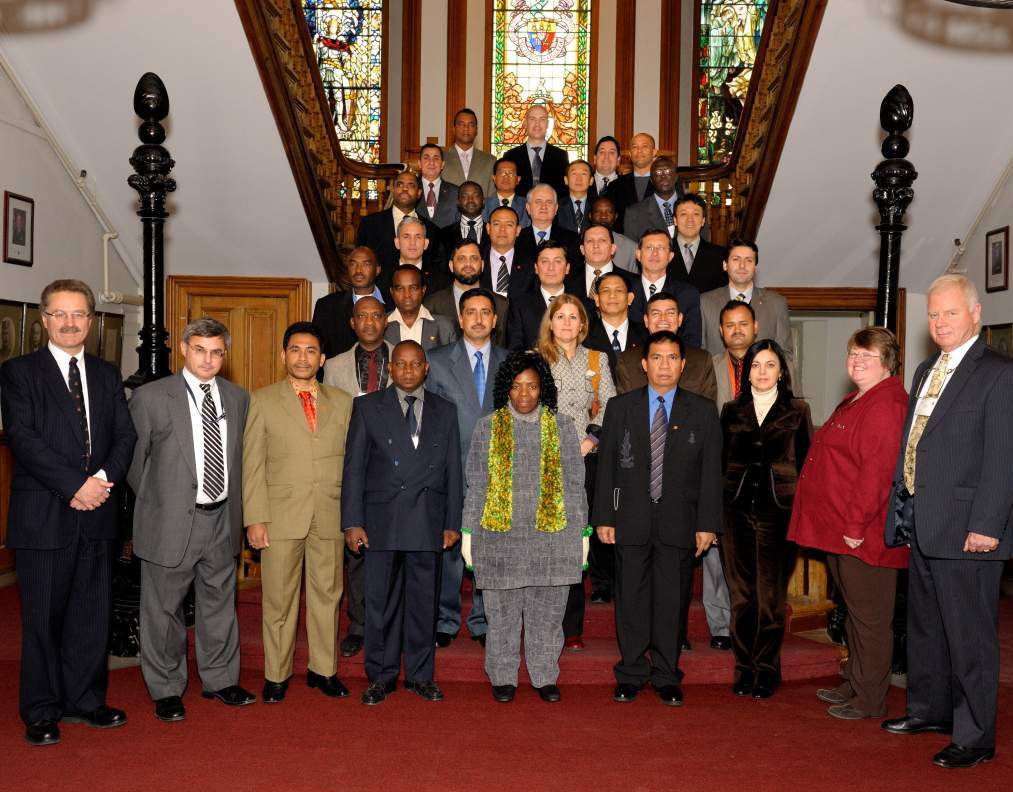 Caption: The 2010 DMTC CMR Seminar was held 29 November – 03 December in Ottawa and the Royal Military College of Canada. 31 nations from around the world were represented; nearly 1/6 of the United Nations.  This Canadian led Seminar is the ‘senior’ DMTC offering – the invited participants are the most senior of any of the DMTC/defence diplomacy many offerings.

Canada engages in defence diplomacy as part of its contribution to international peace and security and to promote its national profile on the world stage. The Seminar Director was 6464 David Harries (CMR RMC 1965) PhD PEng – pictured, front row extreme right

Delegates from around the world attend Seminar

“…the dialogue and discussion was the best by far of the four editions of the current series of events (since 2007).”

The DMTC develops policy for and implements training programmes in support of the Canadian government’s foreign and defence policy objectives. The programme expands and reinforces Canada’s defence relations and the promotion globally of its profile.

In 2006 the CDA accepted the then-DMTAP’s invitation to design and run a civil-military relations (CMR) seminar to be given annually in Ottawa in November or December. The request and the CDA’s response continue to reflect the now-DMTC’s wish to provide a sound programme and that the CDA, with access to the academic resources of the RMC, has the ways and means to do so, based on experienced staff and established courses from RMC’s graduate programmes.

The Seminar is designed to support a number of the activities carried out to achieve the four key objectives of DMTC. These are to:

a. Enhance peace support operations interoperability among Canada’s partners to lessen the operational burden on Canada.

c. Promote Canadian democratic principles, the rule of law and the protection of human rights in the international arena.

d. Achieve influence in areas of strategic interest to Canada.

The aim of the Seminar is to provide participating senior foreign military officers and government officials with an overview of contemporary CMR, from both the Canadian and a global perspective. Key issues of CMR in the fields of operations, administration, politics, law, economics and social affairs will be addressed through a combination of information, opinion and analysis. This academic treatment is to promote understanding and to encourage participants to share their knowledge and experience during and after the Seminar.

The Seminar includes lectures, contributions from participants, visits and a social event.

Each session – normally 90 minutes in length – formally includes time for discussion and questions and answers.

Time during the Seminar is set aside for participants to share information on their own nation’s CMR as well as of personal, professional knowledge and experience. Two 90-minute periods are allocated for this activity.

The Seminar includes two Ottawa visits; one to the Houses of Canada’s Parliament and the other to the Canadian National War Museum. These activities reinforce the contents of lectures and discussions on Canadian CMR, past and present.