10395 Marcel D’Eon, Class of ’75, is Professor of Community Health & Epidemiology and a Faculty Consultant in the College of Medicine at the University of Saskatchewan. Marcel completed his PhD in Educational Administration from the U of S in 1997 and was immediately hired by the College of Medicine to work in Educational Support and Development. He has a Master’s of Education and a double major in Political Science and Economics from the Royal Military College of Canada. He was a classroom teacher mostly for grades 6, 7, and 8 both in Victoria, BC and Saskatoon. He is keenly interested in effective pedagogy especially cooperative learning and active learning strategies. He has also published in the areas of faculty development, educational theory, determining content of courses, and inter-professional education. Marcel bikes to work year round, is the father of four teenagers, and helps with the heavy work in the yard with his ‘Master Gardener’ wife.

11887 Steven Gasser, Class of ’79, has been employed at the University of Calgary (UofC) since 2008 as the Associate Vice President, Facilities Management. Last year the UofC unveiled its new Strategic Vision and is now working on plans for its 50th Anniversary in 2016. Steven is also an alumnus of the UofC, having completed his Masters in Environmental Design/Urban and Regional Planning. Steven continues to enjoy the many advantages of living near the Rockies by participating with the Alpine Club of Canada as a volunteer Backcountry ski instructor, participating in skiing, scrambling, hiking, camping, fishing in the Rocky Mountains and travelling. He and his partner Susanne recently toured Montana and Wyoming with stops at the Battle of the Little Bighorn National Monument and Yellowstone National Park. Steven is active in the Rotary Club of Calgary North as Director of International Service, working on raising funds for a school reconstruction project in Guatemala. Steven’s daughter Cassandra has just started her year at the Nova Scotia Community College in the Baking and Pastry Art program.

13110 Greg Gust, Class of ’81 – After “first retirement” from the Forces in 1995, Greg joined Bell Helicopter in Mirabel, Quebec. After 17 years with Bell, his new career continues to keep him gainfully employed and challenged. He is currently serving as the Value Stream Director for the Model 429 helicopter; an Ops guy, responsible for the production of the helicopter. Over the past years, he has held a variety of positions of increasing responsibility, ranging from Flight Test, through Engineering Site Leader, to Chief Engineer for the 429. The Gust family heartily enjoys Montreal with Ingrid continuing to work as a Consultant with Quebec’s Ministry of Education, Kirsten starting Med School at McGill, and Kelsea in her final year of Graphic Design at Dawson College. Greg and his family make regular trips “back home” to Petawawa and Moose Jaw, where it’s always good to visit with family and friends. (ingrid-greg@videotron.ca) 14153 Steve Young, Class of ’84, has just returned from Libya where he assisted the Ministry of the Interior with an assessment of its police training infrastructure. He is also involved in a project to assist the African Union’s strategic headquarters in Addis Ababa, Ethiopia, with improving its information analysis capability. Part of the project involves participation in Exercise NJIWA, an activity designed to assist the civilian and police components of a typical mission headquarters with crisis planning; exercise dates are 23 October to 11 November, 2012. When not on the road, Steve is currently the Training Director for CANADEM, a non-governmental organization located in Ottawa. 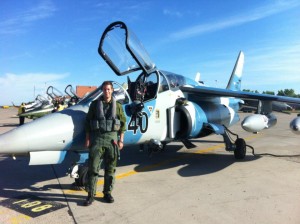 23479 Benjamin Lawson, Class of ’06– After graduating in 2006, Ben was posted to 1 CFFTS and completed training as a navigator in 2008. He was then posted to San Antonio Texas to attend the USAF Electronic Warfare Officer course at the 563rd FTS. Upon graduation, he was posted to 414 Sqn in Ottawa, where he gathered some 500 hours flying in the backseat on the Alpha Jet in a tactical role as Red Air against our CF-18s and naval ships.

He is currently working in Training & Standards at 1 Wing in Kingston, ON, where he is in charge of developing EW training for the Tac Hel fleet. He assumed these duties in August of 2012 and in his short time in Kingston already, has been able to attend a Legacy Dinner at RMC as well as Reunion Weekend taking in the obstacle course. Free time is spent travelling the world and working towards an MBA. (benjamintlawson@gmail.com)

M0906 Tammy Dettrich, Class of ’08,  graduated from RMC Dec ’08 (honours Psychology) and completed her occupational training at CFB Kingston. In July ’09 she was posted to CFB/ASU Shilo as the new Base Personnel Selection Officer (BPSO). Tammy was very happy to return to her home town as she still has family and close friends in the area. It was a challenging three years which she met head on by improving base services and strengthening relationships with the local college and university. This past June (2012) she was posted to CFRC Prairies and the North located in Calgary. It has been an exciting time exploring southern Alberta and the Rockies with her common-law partner Tim, as well as learning a new aspect of her occupation. Since arriving in the Calgary area, Tammy and Tim have rescued a thoroughbred mare, Royal, and are spending much of their down time in the foothills and Rockies on horseback. (TAMMY.DETTRICH@forces.gc.ca)