Crusade brought rugby program back to life at RMC 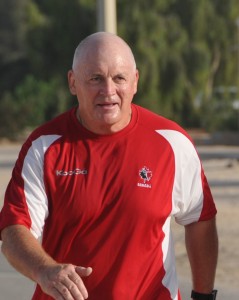 As campaigns go, this one got pretty intense, Rob Parent recalls.

“It got very interesting,” Parent said.

“I made myself a huge pain in the ass.”

Not even generals could elude the crusading Parent, who one day struck up a conversation with Rick Hillier, the former chief of defence staff, who he happened upon in the men’s room at National Defence Headquarters. “I was trying to get him to support the rugby team as a leadership-development tool for army officers,” Parent said.

“I had no pride when it came to shilling for the rugby program. No one was safe.”

Parent did not attend Royal Military College as a cadet but he is no less connected to it. He spent four years living on the grounds, while his father taught surveying to civil engineering students there. He had two postings to the college, as a squadron commander and a division commander.

Parent was on a tour in Bosnia a dozen or so years ago when he heard of the program’s demise, and he was dismayed at the news. “Rugby’s a premier team sport, with minimal costs and great benefits,” Parent said. “The fact that I had almost 10 per cent of the institution participating was deemed to be extraneous to the institution and could be let go.

“It was a huge, huge mistake.”

There wasn’t a lot anybody could do from several time zones away, but when he got back to Canada, Parent made it his mission to resurrect the program. He knew it wouldn’t be easy, but he was determined.

“I objected, not just as a rugby coach, but as an officer and someone who saw the institution letting go a premier leadership-development and warrior-development tool. It was also a wonderful linkage to military communities across the world,” he said.

“When I returned I made it one of my purposes in life to argue as convincingly as I could for bringing back the rugby program.”

Parent was serving with the Brockville Rifles militia unit at the time, and he set about the task with vigor but he quickly realized that no amount of zeal was going to make things happen any more quickly. “You can’t eat the elephant all in one bite,” he said, but months later he managed to get a rugby match scheduled one ex-cadet weekend, current students versus old boys.

“That went off really well,” he said. “There was a lot of moral support from the ex-cadet world. People were finally saying, ‘Why did this happen? Explain to me again why this was a good idea.’ They could not produce a viable reason why the program was decommissioned.”

That proved to be the beginning of the end of rugby’s hiatus.

“The thing about RMC is there’s a lot of reachback, both by ex-cadets that have sons and daughters at the institution, and by senior officers who retain a very strong interest in it,” Parent said, “so this debate began to get traction in senior quarters and I suspect that more and more support was being generated in the wider military community.

“Then we got an opportunity to have a spring camp and I remember we ran an intramural program. That’s when I was pretty satisfied that rugby was going to return.”

Return it did, seven years ago, after a lapse of about four years.

Parent came upon the object of his passion quite by accident. He was casting about for an activity to supplement his fitness for hockey — he was a charter member of the Kingston Canadians, with whom he played four years in what remains, 40 years later, as the salad days of major junior hockey in the city — when he discovered the Kingston Panthers.

“That was my first exposure to serious rugby competition and I loved it,” Parent said. “I was young enough and fit enough, I was running around like a silly bugger. I didn’t really know what I was doing but I was chasing the ball and they were happy with me doing that.”

The city’s club team was a melting pot of local players, intercollegiate players from Queen’s, and English, South African and Australian ex-pats. “It was really interesting,” Parent said. “You’re a 19-year-old young man and you’re meeting all these individuals and integrating with them. It was a special sporting experience. It was a lot of fun but really inspiring—the comradeship, the game itself, that idea of being that one collective spirit on the pitch. It bonds you to the game.”

Hockey was Parent’s first athletic pursuit. After junior, he was drafted by the Minnesota North Stars. The 79th player selected in the draft, he played one year with the Fort Wayne Komets of the International league (whose coach, Gregg Pilling, just happened to be married to the daughter of RMC coaching legend Danny McLeod). “That was great fun but I decided to go back to school.”

Parent wound up in Wilcox, Sask., at Athol Murray College, which at the time was associated with the University of Regina. While there he was a teammate on an intermediate squad that included former Olympic players Barry MacKenzie and Terry O’Malley. Parent himself was among those who auditioned for the 1980 Olympic team, Canada’s first since it began a boycott of world championships ten years earlier.

He put hockey aside to concentrate on his studies and finished his degree at the University of British Columbia. Each summer, he’d return to Kingston and play rugby with the Panthers.

“It was a very natural progression to go from sports into the military,” said Parent, who joined the infantry out of university in 1983 with Princess Patricia’s Canadian Light Infantry. From Calgary to Gagetown to Edmonton to Winnipeg, Parent did a lot of in-battalion work, but it started to become apparent that his role would be in training and instructing. His first posting to Kingston was to 1 Canadian Division in 1996 and one year later he found himself commanding a squadron at RMC. “It was a lot of fun working with cadets,” he said. “It’s a challenge, but a very rewarding challenge.”

Parent subsequently served his first overseas tour in Cyprus, his second in Bosnia, and then after a year and a half at NDHQ, he transferred to the reserves with the Brockville Rifles, with whom he eventually rose to commanding officer. It was while with the Rifles he served in Afghanistan, training the Afghan National Army at the NATO headquarters in Kabul.

Parent rejoined the regular force, dropped a rank to major, and spent the next four years as division commander at RMC. Then followed a tour with the Multinational Force of Observers (MFO) peacekeeping force in the Sinai, which just recently ended.

Throughout his career, Parent continued to be involved in rugby, both in the community and on forces teams, and in battalion hockey, which produced two of his most memorable athletic moments.

“I had the best scrap I’ve ever had with the Vandoos,” he said. “It was a great scrap, a regimental donnybrook. One of the linesmen tried to grab me and that wasn’t a good idea because I deposited him into the net and carried on with the festivities.”

That was at the first army-wide hockey championship at Petawawa. Former RMC star Steve Molaski helped CF Europe to the title, but the next year the Patricias won, defeating an NDHQ team in the final that featured former Paladins goaltender Andy Scott.

Parent scored a goal in that game.

“Not just scored,” Parent corrected. “As you know, in my junior career I was never known as a goal scorer,” reminded the former defenceman, warming to the recollection.

“There was a clearing pass, I knocked it down, beat a guy wide, beat another guy by slipping it between his legs, put Andy on the ground, flopping like a fish out of water, for the winner.

“It’s like God came down and touched me and said, ‘You’ve got the next 10 seconds; you’re Wayne Gretzky—don’t (mess) it up.”

Though he’s not an alumnus, Parent said his first posting to RMC was very much a homecoming. In his youth he’d lived on Rideout Row, the curent location of CDA headquarters. “We were right on the corner. My window overlooked the baseball diamond, the football field and the harbour. For a budding athlete, it was heaven. It was like living in a big park.

“At that time you could go and every Saturday morning you could shoot. The cadets and the staff taught me how to shoot.”

McLeod, at the time the hockey coach and athletics director, lived in Cavalry House. “He had the best Halloween candies going,” Parent said. “Everybody went to Uncle Danny’s.”

“There’s a generation of engineers out there that have been traumatized by my father teaching surveying,” he said. “I have a more than superficial resemblance to my father and when I first arrived at a regimental engineering function I popped myself up and people saw my name tag and they saw my face and they went, ‘Arrgh, boomer’s back! He’s reincarnated! Oh my god!’

“It was flattering. There were a couple who, having had a few beers, maybe wanted to get a little aggressive, but most of them were very complimentary. He was very demanding but he was very fair. If you did the work, you got the rewards. It was as simple as that.”

Though the college was familiar, Parent said going there as squadron commander involved learning a new culture, though he did so with the benefit of understanding the context of the institution.

“For all its warts, RMC has always been physically my home,” he said. “Coming there as a senior captain, being involved in training with infantry officers, it felt very natural.” It just so happened the college was in the market for a rugby coach and Parent was looking for an opportunity to stay involved in the sport.

“There’s no better way to know cadets as individuals and to understand what their lives are about and what they’re going through, than to be a coach on the grounds. There’s such a distance between a commissioned officer and a cadet. Sometimes it’s very difficult to bridge that without getting too informal. A coaching relationship is ideal for bridging that, but still there’s a sense of distance. You’re still sir, you’re still an authority figure, but I don’t have to be so structured.”

Parent now lives in Newburgh, a village northwest of the city, in a limestone home built in 1848, where he awaits his next posting. He’s the father of three: a daughter Ariel, who lives in Vancouver, a son, Robert, “a young corporal doing all the things I love to do, jump out of airplanes and stuff like that” with the Royal Canadian Regiment, and a daughter, Laura, who recently graduated from Queen’s University.

Ed Note: We were on the ground at the college when the announcement was made that rugby would be dropped as a varsity sport. There is no doubt that Major Rob Parent led the charge to have the decision reversed. We also recall the late 14944 Phil Cowie and 20763 Mike Hooper both of whom played big roles, working with Rob, in the lengthy process of having varsity rugby reinstated.

Later a number of others jumped on the bandwagon but these three were definitely the key leaders. who were out front early kicking and screaming.