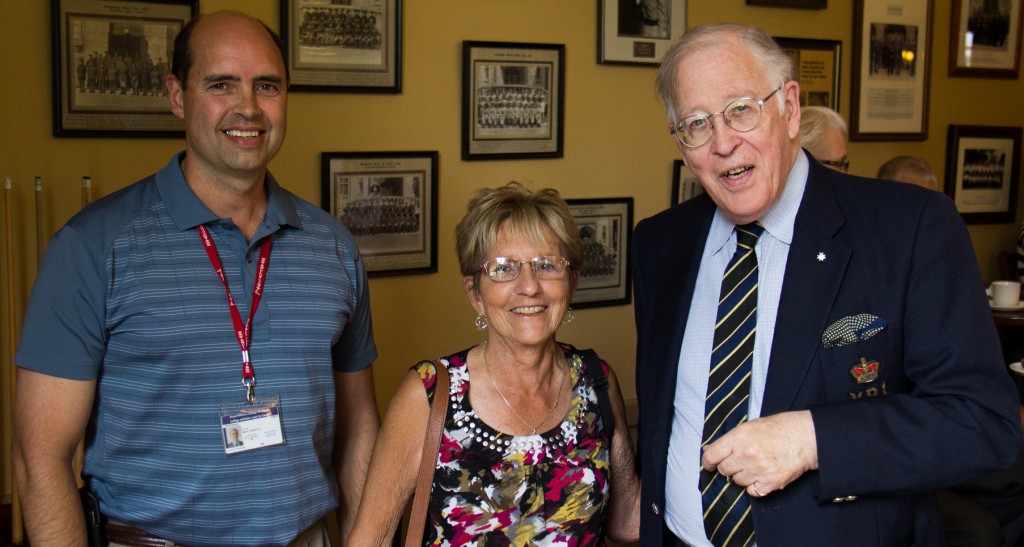 All photos by Curtis Maynard

Imagine for a moment visiting a place where your dad worked (served) for close to 30 years. Imagine further, you haven’t set foot on the grounds since his memorial was held there about 29 years ago. Imagine even more you have been invited to visit a very special room located within the grounds of the Royal Military College of Canada that was named in his honour. Imagine too you will be be speaking with the person who now fills the position once filled by your dad for so many years.

Finally, imagine the feeling when one of the first persons you meet on the visit is the gentleman that gave the eulogy at your dad’s Memorial Service back in 1985. 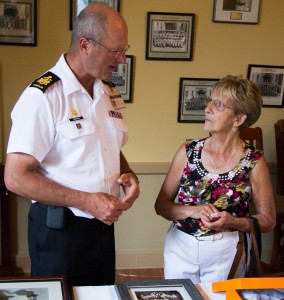 The College had the pleasure of welcoming back the daughter of Sergeant Major J.E. Coggins, MBE,CD last Wednesday (13 Aug), Jerry (Coggins) Roddy. She was welcomed to the College by the present College Chief Warrant Officer, CPO1 Keith Davidson , the PMC of the Coggins Club, WO Jim Harper, members of the Coggins Mess Committee, 13134 Col (ret’d) Bill Lewis (who organized the visit) and 3572 MGen (ret’d) Frank Norman. RMC Club, Executive Director, 13987 Bryan Bailey was also part of the reception group.

It was a very emotional and heartwarming visit, as Jerry had only visited the College one other time since the Memorial Service for her father in February 1985. MGen (ret’d) Norman was the Commandant at that time, and as previously reported in eVeritas, gave the eulogy at the Memorial Service. During the visit, Jerry Roddy presented to the Coggins Club a few mementos from her father, including three of his trophies won for both military and athletic excellence, copies of some of his early drill and first aid manuals, his Royal Fusileers tie and beret, and his Royal Fusileers photo.

These items were very gratefully accepted by CPO1 Davidson , on behalf of the College, and will be adequately displayed in the Coggins Club. Many stories and anecdotes from “Coggie” were shared, with many ending with one of his famous sayings: “I have seen better; I have seen worse, but not many!

Ms Coggins Roddy was very touched by the visit, and was thrilled to see the College and the Coggin’s Club. It will certainly be an afternoon that she won’t soon forget.

A special tip of the hat to both Jim Harper and Bill Lewis for making it – not just happen – but with that extra touch of class that made it a very special visit.

More photos from the visit here