Skip to content
04 May 2014 / Archive, Claude Scilley in conversation

They Still Call Him Coach in Santa Rosa Junior College 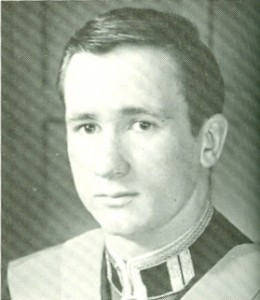 People get into coaching for a variety of reasons. For 8074 Doug Smith, it happened quite by chance.

“I was traded at a garden party,” said Smith, a 1969 graduate of Royal Military College, who had been an outstanding running back on the Redmen football team. At the time Smith had been out of the college for about four years and he was on his second posting, which happened to bring him back to town at CFB Kingston.

At this particular function, Smith was chatting with Col. Gardham, who was director of cadets at the time. “He needed a football coach,” Smith recalled from his home in northern California. Before he knew it, he had been re-assigned.

“A year after I was back I was a squadron commander at RMC and the football coach.”

It was the start of a distinguished coaching career, one that parallelled a remarkable business career, both of which Smith continues to pursue.

“Theoretically I’m retired as of about a month ago,” he said. “I’m just kind of trickling along. I’ll be looking for something more critical to do but right now I’m just kind of enjoying things.”

One of those things is serving as an assistant coach at Santa Rosa Junior College. “It’s fun,” Smith said. “It keeps you thinking and keeps you young and that’s kind of why I do it.”

Smith studied electrical engineering at RMC, and admits that he was not quite the force in the classroom he was on the football field — or the hockey rink, or the boxing ring. “I didn’t have time for academics,” he said, chuckling. “Why would I worry about those?”

Smith is the son of American parents from Worcester, Mass. His father, whose family was originally from Nova Scotia, came back to Canada to enlist when the Second World War broke out. He flew Typhoons, single-engine fighter-bombers, over the Normandy invasion and later was shot down over Europe.

After the war, the elder Smith was commanding a fighter squadron in Germany when he died in a mid-air collision at the age of 37. “I was left fatherless at 13,” Doug said. “It was a tough thing.”

His father had been impressed by RMC, though, and before he died he’d started chatting it up with his son who, by the time university loomed, was living in Ottawa. “I was a pretty good football player and had RMC on the mind.” He went to an officers candidate event at Centralia, an RCAF Station near London, where he met Danny McLeod, the college’s athletics director.

“He got me kind of fired up,” Smith said.

After graduating, Smith went into the radar system for three or four years, serving in Labrador and the Algonquin Park area. He then was posted to the electronics school in Kingston, from where he was “traded” to coach and command a squadron of cadets at RMC.

After his baptism of fire with the Redmen — “I really didn’t know what I was doing,” he says in retrospect — Smith left the Forces shortly thereafter to pursue his MBA at Queen’s, where he won the gold medal in 1979.

“That was pretty good for a guy who set academic records at RMC,” Smith teased, “for writing 12 supplemental exams.”

Before long, Smith did, indeed, get the hang of coaching. While he was at Queen’s, Smith was reunited with his old coach at RMC, Doug Hargreaves, who was by then coaching the Golden Gaels. Smith was on the staff when the Gaels won the Vanier Cup in 1978, and he was the defensive line coach at University of Toronto when the Varsity Blues won the national championship in 1993.

Smith won the Gino Fracas Award in 1992, for outstanding career service by a volunteer assistant coach in Canadian intercollegiate football.

Industrially, Smith has done a lot of things since he got out of the service. After Queen’s, he worked at Alcan, where he served as plant manager in Kingston and a marketing manager and general manager in Toronto. After several years, he left to work for Gravure International, and while touring a facility of one if its suppliers, he was convinced to buy it. “I ended up in the small business world,” Smith said. “I sold it four or five years later to International Paper.”

Smith found his next opportunity in Healdsburg, Calif. “If it had been Omaha I probably wouldn’t have gone, but it was the north coast of California and it’s a beautiful area. The climate’s fantastic and the grapes grow.”

He joined the company as it was developing the electro-optical targeting package for the Predator unmanned aerial vehicle — commonly known as a drone. “Took that from a bench model to three years later an Air Force squadron,” Smith said. “It was all hush, hush, super-secret stuff, but it was quite a thing.”

What followed is what Smith now refers to as his first retirement. He taught at Sonoma State University, and also an electrical course at the junior college. “I kicked around for a couple of years but I was bored to tears, so I went back into the workforce.”

He worked as an engineer for Zenia, a company whose products include no-fan air cleaners, then moved to a company called Horton Automation, which makes signal components for trains.

“A buddy of mine in Vancouver had a firm there and I’d been on his board of directors eight or 10 years,” Smith said. “I remember when he asked me if it was a good buy and I said, ‘Yeah, it’s good,’ but he was going to put it down because it hadn’t made any money for several years.

“I said, ‘No, don’t do that, I’ll run it myself.’ We got it turned around and on its own feet and we sold it to a Portuguese outfit.”

A resident of Santa Rosa for 16 years — “as long as I’ve ever lived in one place” — Smith is asked if he enjoyed his time at RMC.

“I don’t know about that,” he said, after a short pause. “I wouldn’t say I enjoyed it until I got back there as a squadron commander, and then I really enjoyed it.

“I think when you’re there, you don’t really see the thing for its benefits. You don’t have the maturity to understand what’s happening. After I was there as a squadron commander and I looked at all the same stuff I went through, I could see it; I could see the principles and the reasoning for things. I think I warmed up to it a little bit. I wasn’t warm to it when I was there.

“I might be the first one to say it’s a good place to be from. It isn’t necessarily where you want to be at the time.”

Among the more cherished memories are those of the people who helped him along the way.

“I got in a lot of trouble, but you know what? There were a lot of good people who really were behind me,” Smith said. “Doug (Hargreaves), of course. He was marvellous, and he always had good coaches with him. The ‘Maje,’ Danny McLeod was just something else. There were some professors that I liked, especially in Elec-eng.

“I got along well with the military wing guys. They certainly backed me up when I got in a little hot water. When I was at Centralia for summer training the first year, there were a couple of sten guns went missing. They were demo models, they weren’t real ones, but I came back to the college under lock and key for the second six months of my appearance there. I’m sure Commodore Hayes, or Air Commodore Birchall must have backed me up. They protected me and I really appreciated that. They did a lot for me.

“There were people there who covered me for my escapades. They did it for other guys, too. I know they did.”

Next Issue, Claude will be catching up with ???