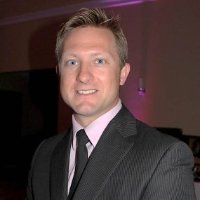 After a few years of searching for the right vocation, Marc Granlund today finds himself in a position that combines the chemistry he studied at Royal Military College with a competitive milieu that mirrors the one in which he thrived as a varsity hockey player.

“It’s funny how that came about,” Granlund said from Mississauga, where he is the general manager of the Toronto branch of Inx International, a company that makes commercial printing ink.

“It seems very coincidental but you’re right. It’s a very close match and it works out quite well.”

When Granlund left RMC with a Bachelor’s degree in chemistry in 2001, he drifted for a while. An RETP candidate, he didn’t stay in the Forces. He did a number of things, first taking a contract position with his brother’s company in Cambridge, a firm that makes parts for space satellites.

“The whole reason behind chemistry is I really wanted to go into the medical field,” he said, “but RMC really didn’t have biology or anything like that. The closest they had was chemistry, so that’s what I did. I also took courses over at Queen’s during my time at RMC in anatomy and biology with the intent to move into (medicine) when I graduated.”

Granlund, however, didn’t pursue that path. “I was kind of schooled out after four years, and I really didn’t feel like going (to medical school) right away. I figured I’d get into the workforce and my brother helped me out with an opportunity.”

When that contract ended, Granlund moved to Toronto and did some supply teaching. He deferred acceptance into teachers college, and contemplated a career in physiotherapy. “It was a point in my life where I was a little bit lost,” he said.

That was until he reached out to another ex-cadet—who also just so happened to be a former varsity hockey player. At the time, 15950 Brian Collict was president of Sun Chemical. “He was kind enough to sit down with me and I got my foot in the door there,” Granlund said. “It really was a ground-floor position, where I was mixing ink, all manual labour, but it was an opportunity and I ran with it.”

In a year and a half there, Granlund rose to be an in-plant supervisor, a position that required him to work with customers remotely. One day, a conversation with another supplier at a job site led him to leave Sun Chemical for Inx International, where he has been now for almost 11 years.

The Illinois-based firm is the fourth-largest supplier of commercial ink in the world, and its specialty is metal-can printing. “Coke can, Pepsi can, beer can—you touch a can and that’s generally our ink on it,” Granlund said. That’s just one market in which Inx is engaged, some of which are growing rapidly and while other traditonal ones—print publications, for instance—are in serious decline.

“It is a very competitive field,” Granlund said. “I actually enjoy the sales side of things. Every day is different.”

That he enjoys the competitive aspect of his job would not surprise anyone who ever watched Granlund play hockey. He played two years of junior B hockey with the hometown Sarnia Steeplejacks, during which time he suffered a serious knee injury that put into doubt whether he’d ever play the game again.

Hockey, however, was too deeply ingrained to be sidetracked by a few surgical pins in his leg. “I didn’t know if it was going to happen or what was going to come of it, but I certainly was keen on doing something in hockey,” Granlund said. “It was always a dream (but) I had to come to the realization that school was probably the best route for me at that stage of my life. The fact that I could do university and continue to play hockey was really appealing.” 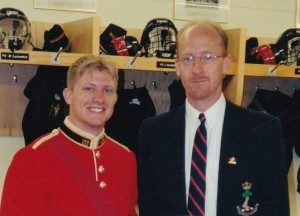 To that end, in his senior high school year Granlund attended a prospects camp in Leamington for college recruiters. It was there that he met Redmen coach 14080 Andy Scott. Photo left caption: Marc Granlund and coach, Andy Scott. Marc was chosen the Danny MacLeod trophy winner in IV year.

RMC had not been on Granlund’s mind. “My brother was in Air Cadets so I’d heard of it but didn’t know a lot about it.” He had other options, including an offer to attend a school in Albany, N.Y., but coming to Kingston was somehow intriguing.

“My dad, sitting and chatting with him, kind of put it in perspective. (He said), ‘Are you going to make it to the NHL? Probably not.’ I wanted to stay in Canada and wanted to have a good education. I knew the military thing was going to be a challenge. I didn’t really know what to expect of it.”

It was, Granlund said, “very much a rude awakening for me.”

“Don’t get me wrong,” he said. “I was raised with pretty good values about being responsible; you work hard, you’re rewarded. That being said, the whole military structure was brand new to me. I never did Air Cadets, like my brother did, and my sister did Sea Cadets, but I was never exposed to that.

“For me, being told what to do and how to do it was very much an awakening.”

It took a while for Granlund to adjust, and he admits to entertaining second thoughts. “I absolutely did,” he said. “I was thinking, “Geez, did I do the right thing here?’ but as time went on you realize you don’t take everything wholeheartedly. It’s a bit of a training process but not having any experience with it before, you just have to read it as you go.”

Granlund played hockey all four of his years at RMC, during which time the team won one and tied one of its games with West Point. “We had a pretty good team through the four years I was there, that’s for sure. We had 22409 Tom Connerty as our goalie starting my second year, and he was a big part of the team. He was a phenomenal goaltender.”

Of the games with Army, Granlund recalls the intensity foremost.

“It was such a thrill to get out on the ice,” he said. “Playing university hockey you don’t normally have 2,500 or 3,000 fans watching you, so when that game did roll around, you had a ton of adrenaline pumping through you. There’s so much excitement around the game itself, just for the history that goes along with it. It’s such an old rivalry. The depth of that was amazing, so to be part of it was such a cool experience.”

Granlund scored a goal in his final game, but mostly he recalls the games as rough, physical affairs, which suited him just fine. “Yeah, I certainly liked the rough stuff,” he said. “There were a couple of years I got in a fight. That was fun.”

It was a style Granlund embraced.

“Everybody’s got a role,” he said. “That’s why it’s called a team, right? Not everybody’s going to be a goal scorer, or the goalie. I didn’t mind being the grinder. It’s what I enjoyed doing … be tough, play physically and if I pop in a goal here and there, great.”

Granlund recalls his time at the college fondly.

“It was an awesome experience. I wouldn’t change it for the world,” he said. “To be honest with you, I always thought, ‘I don’t want to be committed full-time to the military. What if I want to have a family? I don’t want to be forced to move around and all that other stuff.’ I don’t think I made a wrong decision, but now I’m at the stage now where I look back and (think) that would have been all right. In another three years it would have been 20 years in the military.

“I didn’t know at the time if I wanted to commit to five years (of service) after university. I think if I knew what I know now, it probably would have been a different story. I still talk to a lot of friends in the military and they’re doing phenomenal and they have families.

“I do sometimes look back and think, ‘Yeah, I could have done that.’”