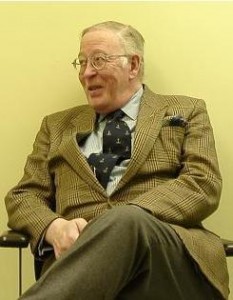 3573 Francis John Norman entered Canadian Services College Royal Roads in 1952. He was Commandant at RMC 1982-85 with the rank of BGen. The highly popular varsity football program had just been cancelled prior to his arrival. Lady Cadets were entering III Year for the first time – IV Years who would be graduating in May 1983 would be the last all male class to graduate from RMC. His particular era as Commandant was arguably one of the most scrutinized in the history of the college due mainly to the focus on the Lady Cadet issue.

He retired from the Canadian Forces with the rank of MGen and resides in Kingston with his wife Anne.

MGen (ret’d) Norman took time out from his busy volunteer schedule to chat with Bill Oliver about his time as a cadet and as the Commandant at RMC.

e-Veritas: You entered Royal Roads Military College (RRMC) in 1952 and spent two years there. What do you recall from your early days as a Roadent ?

MGen (Ret’d) Norman: Actually I entered Canadian Services College Royal Roads – the difference is more than just semantics as it reflects the relationship between the three Colleges at the time – the more formal RRMC did not come into being until much later, when it became a degree-granting institution.

The term Roadent was not in use at the time as we were Officers Cadet or Cadets of Canservcol Royal Roads and referred to as such, not even Gentlemen Cadets – the title (and rank at RMC).

e-Veritas: You arrived at RMC in 1954. Your Class now consisted of those of you who arrived from RRMC; and influx from CMR, and those who had started at RMC. What do you recall on how the staff handled these three groups in having them mesh into one class ?

MGen (Ret’d) Norman: Again, not quite so. There was no transfer from CMR in 1954 – the first arrival was in 1955. Those from Royal Roads and RMC had already established friendships through the two summer training periods. The staff took little interest in ‘mesh(ing) into one class’ as the running of the Wing was a Cadet responsibility, with some slight oversight by the Squadron Commanders and the Military Staff Officers (all with at least Korean experience, but most with World War II ribbons). Coming from Royal Roads, there were three challenges – the size of the College (450); the use of single rooms with no common rooms for gathering with classmates; and the fact that the Royal Roads Seniors had already practised leadership within the Wing, and knew the good from the bad (of course a number of the Fourth Year had been the Seniors at Royal Roads two years before). Our RMC classmates had not yet had that opportunity.

e-Veritas: You graduated from RMC in 1956. You returned as Commandant in 1982. How in touch were you with what was going on at the College during those intervening 26 years?

MGen (Ret’d) Norman: Somewhat. Over the period, I had been a student and DS at the Army Staff College, and a Course Member at the National Defence College – thus in Kingston. Regular arrivals of young Ex-Cadets to the Regiment kept one aware of some changes, and frequent visits for Ex-Cadet Weekends highlighted major changes. 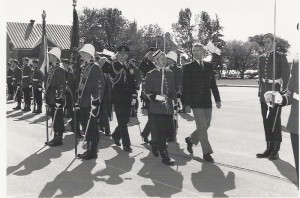 1982 Ex Cadet Weekend Parade: 2897 MGen (ret’d) Herb Pitts (RMC ’52) – Ex Cadet Club President accompanied by Cadet Wing Commander 13894 Jeff Lafortune. They are followed by the Commandant, 3572 BGen Frank Norman and 2265 LGen (ret’d) Bill Anderson (RMC ’32) both of whom are saluting. Bill Anderson was on the parade because it was the year of entry for his Class to the Old Brigade and he had been their Battalion Sergeant Major.

e-Veritas: What were the most significant differences between 1956 and 1982?

MGen (Ret’d) Norman: Size, both in the Cadet population (700+ redcoats) and in the plant – Sawyer and Girouard Buildings, Champlain, the SAM Centre and Hockey arena, the increased number of playing fields (recovered from Navy Bay), and the Senior Staff and Cadet Messes were all built after 1956.

The ages and experience of the Squadron Commanders, known to the Cadets as ‘super cadets’ !

Bilingualism had been introduced, with a significant increase in the Academic Staff.

The concept of Military Leadership and Management had replaced Military Studies, and was being taught as an academic subject, rather than a military one given by the Military Staff.

The breadth of academic degree choices – and the granting of those degrees at the Bachelor’s and Master’s levels, in both languages where practicable.

The existence of formalized UTPM and UTPO programmes, as well as PG students.

e-Veritas: Lady Cadets had been accepted into the College in September, 1980. Consequently, on your arrival there were now ladies in I, II, & III Year, but none in IV Year. What particular challenges did this situation cause you and your staff ?

MGen (Ret’d) Norman: The major problem was the inability of some members of that Fourth Year to accept the change, with the broad acceptance within the other years that change had come. LCWB was deeply rooted in the Fourth Year, and still raises the hackles of those who watched it in practice, both Cadets and Staff. It was an unacceptable statement, the use of which tarnished their other, significant successes as a Class.

e-Veritas: Describe a couple of situations involving the Lady Cadet issue that caused you to ‘think out of the box’ to come up with the right result.

MGen (Ret’d) Norman: Fraternization had been described as a relationship between Cadets separated by more than one year – ie a relationship between a First Year Cadet and a Third Year Cadet would be described as fraternization, but between a First Year Cadet and a Second Year Cadet would not. As this was predicated on gender, it had to be re-thought – as one Cadet asked some years later, in print, ‘who was it that thought you could make sex unpopular?’

The policy on pregnancy was discriminatory, as only Lady Cadets could be released to continue their studies at a civilian university, and in extreme cases, only they might be excused from the obligation to serve. Again, as this was a gender issue, it had to be re-thought, and within weeks of the new policy being introduced, it had to be implemented and it worked with a series of options, with outcomes.

Some male Cadets (obviously not Gentlemen) persisted in active discrimination and harassment of Lady Cadets, but this became less of a problem over time as the critical mass of Lady Cadets increased.

The ability of Cadets to change from scarlets to Mess Dress at midnight on the night of the Graduation Ball raised a question as to whether Lady Cadets might change into Ball gowns as well – the first year, 1984, there was so much power being drawn by the hairdressers who had been hired-on that all the fuzes blew in the SAM Centre.

Some Ex-Cadets were uncomfortable to find ‘their’ room occupied by a female, but after the initial shock, got over it. On the other hand, some Ex-Cadet members of the Minister’s Advisory Board, or with positions in the Club hierarchy, left their appointments over the issue. Both eventually came to live with the change, even accepting that there could be a female CWC – which occurred first in January, 1986. 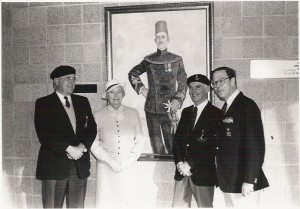 Class of 1932 gift on entering the Old Brigade: Pictured (L – R) are 2265 LGen (ret’d) Bill Anderson and Mrs Frances Anderson; 2307 BGen (ret’d) Ken McKibbin and the Commandant 3572 BGen Frank Norman. The occasion was the presentation of a painting of 147 Sir Édouard Percy Cranwill Girouard who entered RMC in 1882. The Girouard academic Building was named in his honour in 1977.

e-Veritas: Varsity football had been a high profile sport for many years at RMC. The football program was discontinued in 1982. What were the circumstances that led to the demise of football ? What was the reaction of the cadets of the day, and in particular, Ex-Cadets when this decision was made ?

MGen (Ret’d) Norman: For the circumstances, you need to speak to my predecessor, John Stewart, as the cancellation happened on his watch.

Ex-Cadets were, in the main, distressed by the decision, especially the older ones but when the circumstances were described, accepted that there appeared to be little option. The promotion of rugby satisfied some of the ‘blood and guts gang’, but only slightly. It was really not an issue over time. There was considerably more angst when rugby was cancelled!

e-Veritas: Aside from Lady Cadet & football issues, what were the major events going on at RMC from 1982 -1985 that required a great deal of your attention ?

MGen (Ret’d) Norman: In no order of priority, other than through time:

e-Veritas: At the time you left the position what were your most satisfying memories.

MGen (Ret’d) Norman: Again, in no particular order of priority: 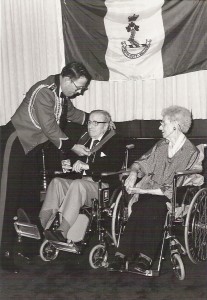 Honourary Degree Recipient 1984. A special ceremony was held in Winnipeg during 1984. Pictured (L-R) The Commandant as Vice-Chancellor presenting an Honorary Doctorate to the oldest living Ex-Cadet at the time -810 JFJ (Jim) Blanchard who entered RMC 1908. Mrs. Blanchard looks on with pride.

e-Veritas: You have resided in the Kingston area for quite some time and are often seen at various events in and around the College. What are your impressions of the College in 2009 ?

MGen (Ret’d) Norman: In reality, I don’t have enough knowledge to comment, and impressions without context should be kept private.