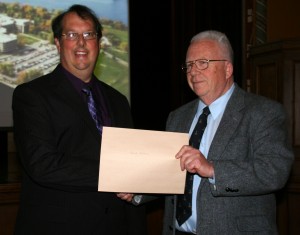 The 2012 Cowan Prize for Excellence in Research Public Lecture was held this past Thursday night in Currie Hall. Dr. David Wehlau, this year’s recipient of the Prize, received a check for $5000 from H24263 Dr. John Cowan, former College Principal and the man who endowed the Prize, before giving a presentation to an audience of staff, Cadets, and the public entitled, “Quantum Cryptography: An Unbreakable Cipher.” Several senior members of the College community were also present, including Dr. Joel Sokolsky, College Principal; Cdr Mike Mooz, College Chief of Staff; Dr. Lawrence McDonough, College Dean of Arts; Dr Philip J. Bates, College Dean of Engineering; and Dr. Thomas Racey, College Dean of Science.

Dr. Wehlau was very direct and clear in his presentation, detailing the theory of quantum mechanics and just how a cryptography system that uses the theory would work before moving on to his specific area of research. That he won the 2002 Class of 1965 Teaching Excellence Award was not surprising when one considered that he was able to explain quantum mechanics in such a way that the Arts students in attendance (including the author, an English grad) were able to grasp most of it.

“I am not a cryptographer,” he said, “I am a mathematician who ended up doing research in cryptography, but basically, in cryptography you have two people, or two computers, who want to communicate securely without allowing anyone else to listen in. Encryption allows them to do that. Most encryption systems are based on the fact that they could eventually be broken, but it would just take 30 years. However, with the right “trick” it is possible to break them far more quickly. If one has the “key” to the system, the trick, it is possible to break the system and listen in to what is being said. What is needed, then, is a way for the two people to pass that key securely from one to the other without anyone else knowing what that key is. They need a way to communicate secretly without first communicating secretly, as it were, and the properties for quantum mechanics allow them to do that.”

Dr. Wehlau then went on to explain how it is possible to use photons to transmit data. “You’re basically encoding bits of information with light. It is possible, then, to transmit the bits without fear of an outsider listening in, because if someone does listen in, they have to receive the bits that were sent and then re-transmit them. You’ll know if While quantum cryptography works in theory, he said, it’s not quite the same in real life, and that’s where his research comes in. “Transmission errors cause differences between what is sent and what is received, and we use an algorithm to remove those errors.” As each time the algorithm is run it breaks up the transmitted bits into blocks of different lengths and then deletes the last bit, Dr. Wehlau’s research focuses on the following questions.

1. What is the block length for optimal efficiency…?

2. What happens if you delete all the bits…?

3. How many times do you have to go through the process…?

As Dr. Wehlau explained in the question period that followed, where his passion really shone through, Quantum Cryptography is a rapidly expanding and very exciting field of research. “In 1992, the transmission distance for this method was 30 cm. In 2009, it was 17 km.” Asked if there are commercial applications of this system already in use, Dr. Wehlau shrugged. “There do exist, but as to where they are being used, well, no one tells me.”

The John Cowan Prize for Excellence in Research goes hand in hand with the Class of 1965 Teaching Excellence Award, which Dr. Wehlau was the recipient of in 2002.

Photos from the event, and the refreshments which followed (click to enlarge): 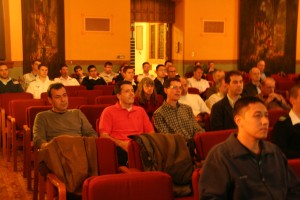 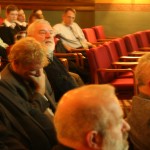 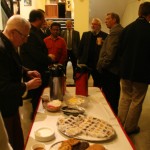 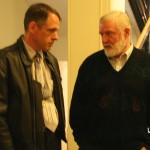 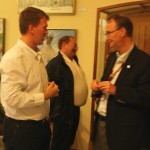