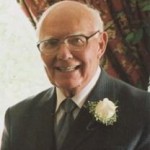 Allan Fetterly died peacefully at the age of 93, on September 13, 2015 at the Camp Hill Veterans Memorial Building in Halifax, surrounded by his family.

He was born January 14, 1922 in Montreal Quebec to the late Mildred and Col. S.T.E. Fetterly. He moved to Halifax as a young boy and attended Halifax County Academy, Dalhousie University and graduated in 1942 from Royal Military College, Kingston, Ontario. While at RMC he was member of the varsity hockey, soccer and rugby teams. A Veteran of the Second World War, he served overseas with the 15th field regiment RCA. 4th Canadian Armoured division.

Until his retirement in 1989, Allan was a partner with his brother Warren in the family business, S.T.E. Fetterly & Son, which his father established in 1928. He was a member of the Commercial Club of Halifax and a lifelong member of St. Andrew’s United Church. Allan was very active in church life, serving as an Elder and on various committees as well as attending church bible studies and prayer groups.

He was an avid golfer; a longstanding member of Ashburn Golf Club, and an Honorary Life Member of the Maritime Seniors Golf Association. He enjoyed bowling with his bowling league, skating, and walking. He was actively involved in his community in ways too numerous to mention, including Meals on Wheels and The Canadian Cancer Society.

Allan’s greatest love was to be with his family. Whether it was eating hamburgers with his grandchildren at McDonald’s, or catching crabs using a hotdog on a string during Sunday afternoon get togethers at the family cottage in Chester Basin, or simply sitting with a coffee and having a chat. Wherever or whenever it was, Allan was always happy to see you. He would break out in a grin and greet you warmly making you feel welcome and secure in his company.

A special thank you to Sheila Galey and the nursing staff of 4E Veterans, for their compassionate care over the past 2 years. Cremation has taken place. Visitation will be Thursday September 17, from 6:00 until 8:00 PM at J.A. Snow Funeral Home, 339 Lacewood Dr. Halifax. A Celebration of Allan’s life will take place at St. Andrew’s United Church, 1390 Robie Street, Halifax at 1:00 Friday September 18. Reception will be in the church hall following the service with interment in St. John’s Cemetery, Halifax. In lieu of flowers, donations may be made to a charity of your choice.

“The King of love my shepherd is whose goodness faileth never. I nothing lack if I am His, and He is mine forever.”