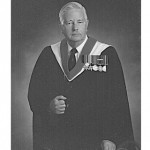 Arthur was a graduate of the Royal Military College in Kingston, Ontario and defended his country and our liberty on the beaches of Normandy France on D.Day. Being the only survivor of his squadron of five on that day in June 1944 was instrumental in defining the rest of his life. He came home to Canada following WWII and together with his wife Margaret (deceased) raised a family of six children, Barbara Eleanor who passed on before him, Bonnie Louise, Frances Lorraine, Peter Richard, Debra June and Stephen Douglas Arthur. Wonderful grandchildren and great grandchildren followed.

In his retirement years, he and his second wife Marjorie did many of the things he always wanted to do, such as travel and see new places. As well, Arthur found much personal reward by involving himself in community affairs of interest and passion to him. These activities kept his life rich and rewarding throughout his retirement years. He will be remembered for his wit and wisdom by all his family and friends and will be greatly missed by his wife, children, grandchildren and great grandchildren.

Arrangements entrusted to the BURKE FUNERAL HOME, 150 Church St., Belleville (613-968-6968). A funeral service is to be held at St. Thomas Anglican Church (201 Church St., Belleville) on Thursday, November 24th, 2011 at 1pm. Visitation one hour prior. A reception will follow the service at the Burke Funeral Home Terrace Lounge. Donations to the Quinte Humane Society would be appreciated. Online condolences WWW.BURKEFUNERAL.CA

Peacefully with his family and close friends at McGarrell Place, on Sunday, November 20, 2011 Thomas Campbell (Cam) Hutchinson of London in his 77th year. Beloved husband of the late Shirley Elizabeth Hutchinson. Dear father of Deborah Molnar of London and granddaughter Tasha Kern of London. Dear brother of Margaret Katherine (Peggy) & her husband Geoffrey Bingle of London. Predeceased by his sister Barbara Waugh. Loved by his nephews. Sadly missed by many friends. Cremation has taken place. A Memorial Service will be held at McGarrell Place, 355 McGarrell Place on Thursday, December 1, 2011 at 2 p.m. with Sue Lupson officiating. Friends who wish may make memorial donations to Multiple Sclerosis Society. Logan Funeral Home, 371 Dundas St., in charge of arrangements 519-433-6181. Online condolences www.loganfh.ca A tree will be planted as a living memorial to Thomas Hutchinson