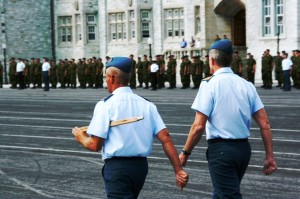 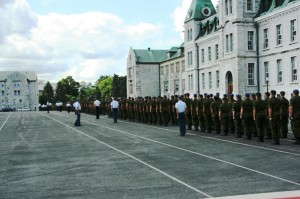 Last week marked the end of Recruit Camp, as the Civilian university students departed to their separate universities. They conducted a parade to issue Canadian Forces cap badges to the recruits as a finale to their training at RMC. I spoke with 25151 OCdt Stephanie Pouliot (RMC 19XX), to ask a few questions about her experiences with her recruits so far. 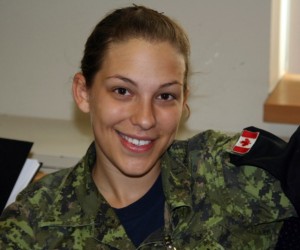 eVeritas: Tell me about Delta week and what the recruits have been up to.

OCdt Pouliot: Delta week is basically a period where the recruits are getting issued their kit, learning rifle drill, doing military knowledge classes, etc. The civilian university recruits have left, as well.

eVeritas: What did you and the other staff teach the recruits in their two weeks here?

OCdt Pouliot: Recruit camp is to get the recruits to a minimal standard, excel in basic and more complex drill movements, discipline (like leadership positions and listening to the IC of the Day) and inspections (getting their rooms to a standard that the FYOP staff can work with or improve). It is our job to get them to that point.

eVeritas: How much of a change have you seen in the recruits since they arrived a few weeks ago?

OCdt Pouliot: They have progressed immensely in PT, discipline, room standard, and leadership. They are at not at a high standard compared to our fourth or even second years, but they are new enough that we can work with it during recruit camp and even FYOP.

eVeritas: What is the difference between RC and FYOP in your opinion?

Thanks Steph for the interview amid your busy schedule. Best of luck to the recruits as the begin FYOP this Friday.