A Few Words from the President…

Reunion Weekend marked the transition from past President 9889 Robert(Bob) Benn to Incoming President 12059 Jacques Gagne. The last three years have been a time of renewal and the re-alignment of priorities for the Club. A Work Plan has been developed and specific tasks will be focused on during the cycle 2013-14.

Examples of the priorities include: Continued evolution and implementation of the key recommendations of the Club’s Strategic Review; creation of a Communications Advisory Committee; development and commissioning of a new Club Website; formalization of the Club’s new HR Policy, to name but a few.

Joint proceedings with the RMC Club Foundation has proven fruitful and opened the channel for more cooperation and bi-lateral initiatives.

Of course, Reunion Weekend would not have been possible without the strong support, dedication and commitment of the Panet House staff and volunteers. Executive Director 13987 Bryan Bailey and his “A” team of S160 Mary Darlington, Isabelle Laferrière and S125 Bill Oliver pulled off all the stops ensuring the Weekend was a success. The full-time staff was augmented with some outstanding dedicated volunteers – 8170 Keith Orton, M1013 Mo Smart,24647 Paul Lystiuk, S134 Rolande Oliver and members of the (w) varsity volleyball team.

To all, I wish you good luck as we move forward.

Let us be guided by our motto: Verite / Devoir / Vaillance

Communications Committee – Leadership Needed – A Challenge AND an Opportunity!!!

The Strategic Review clearly identified that relevant 2 way communication between the Club and its members is the lifeblood of our association, and a prime determinant of member engagement. The General Council has just created a standing Communications Committee, responsible for all aspects of the Club’s overall communication strategy, including:

We are now looking for a Chair Person for this important committee. Interested applicants should have the following credentials:

Interested parties should address themselves to our Executive Director, Bryan Bailey at 613.541.6000×6699 or bryan.bailey@rmc.ca 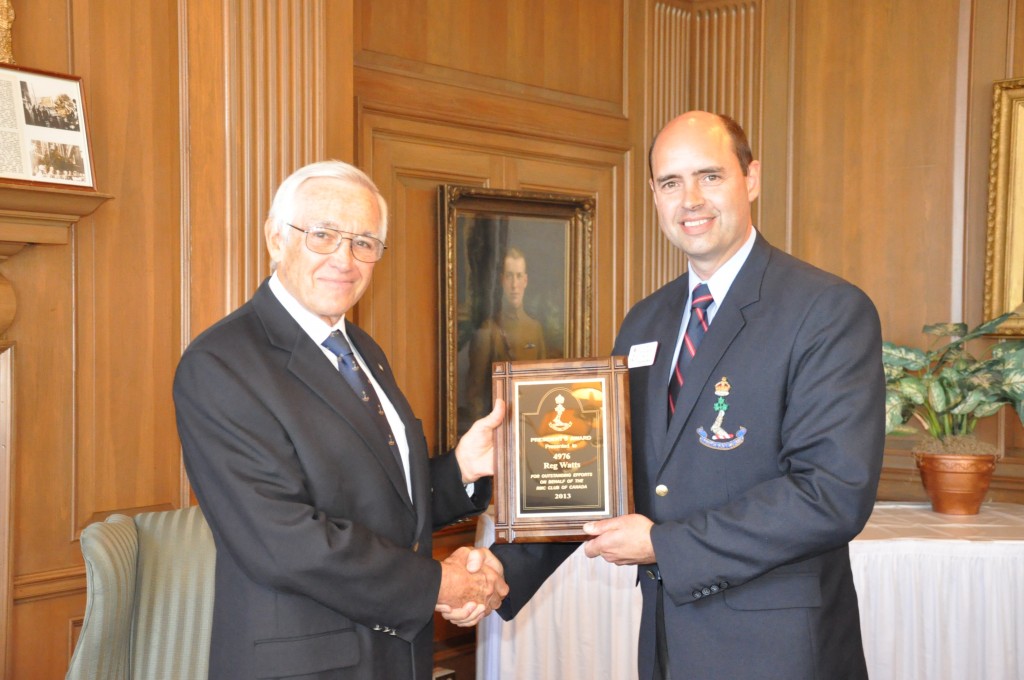 13987 Bryan Bailey, Executive Director, RMC Club had a nice task last Wednesday during the monthly luncheon for the Kingston Branch. At the conclusion of his 12 month term as Club President, 9889 Bob Benn awarded not one, not two, but three President’s Awards.

Two of the recipients were recognized at the recent Club AGM – Toronto Branch for the financial support that they provided for the Physics History Book which was just recently published. The second was to 9143 Bruce McAlpine for the leadership he has provided (and continues to provide) over the year in seeing the implementation of the Club Strategic Plan (CSP).

Back to last week. Bryan on behalf of the outgoing President made the presentation in front of a large group of Kingston Branch members to 4976 Reg Watts (picture left). Reg has been the acknowledged leader of CSP from scratch beginning during the summer of 2011 right through to the implementation stage of the process.

Through various circumstances, we have been on the peripheral of these mega projects since 2011; from where we sit – all three awards are well deserved.