In this second installment of a four part series, we continue to feature the writing of 25366 Mike Shewfelt (BA, English, 2012), whose fantasy novel “The Phaireoir Legacy” tells the story of College Cadet Jim Carmichael, and his journey on horseback from Kingston to Calgary and beyond. A publisher for the novel is currently being sought. Mike Shewfelt would like to thank Dr. Huw Osborne, RMC English Department, for his invaluable editorial assistance. 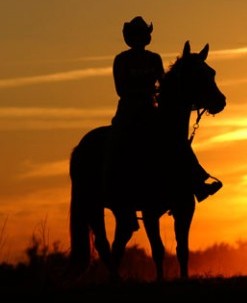 Jim’s head was spinning, but he had to think. What do I do now…? he wondered. An avid rider, and a bush enthusiast, Jim was not much of an outdoorsman. What would the heroes of the Westerns he was always reading do…? Thinking quickly, he turned Rudy to the east and kicked him into a trot. His priority was to get away from settled areas, and that meant going north, but there was a creek he remembered a little to the east, and he would take that. The moving water should cover my tracks, and if I’m lucky, deal with the scent, too. He swung Rudy northeast into the creek, and kept him moving as fast as he dared.

Sydenham Road, running north out of Kingston, was deserted when he crossed it, and his luck held when he had to cross Unity Road ten minutes later. He pushed on, expecting to hear sirens in the distance any minute. If they’re smart, they’ll bring dogs, too, he thought, cringing inwardly.

An hour later, seeing a large lake off to the east, he drew up in the gathering gloom to study the situation. He had no map, yet he had ridden the country north of Kingston on many occasions, spending long hours in the saddle with Rudy. It had been one of his few escapes from College life, and now he was grateful for it. For a while, at least, he could move without a map. Movement was imperative, but the land north of the city was lake country, and if he was not careful, he could ride himself right into a trap. From where he sat he could see car lights close by, and figuring he would have to cross yet another road, he doubled back in the creek, looking for an easier way. I know there’s several big lakes just to the north, he thought. I‘ll have to go far to the west, but I can find a way around them.

When the creek branched off to the north, he took it, riding steadily. He rode north for the better part of an hour, avoiding communities and barking dogs, before he turned west. From a high spit of land, he had seen a long narrow lake blocking his path to the north east, and he knew from his past rides that there was another one not far to the east of it. He had to go around them, and the narrow strip of land separating the lakes meant that it was safer to go around them to the west. Six hours later, having passed more barking dogs and crossed more roads than he could remember, he bedded down for the day just as dawn was breaking on the far shore of the lake he had seen earlier.

Camp was spartan. Jim was exhausted, and so was Rudy. They had pushed hard, but were still far closer to Kingston and the stables than Jim was comfortable with. He left Rudy fully saddled and bridled, just in case he had to leave in a hurry. Jim lay down to rest deep within the bushes, Rudy tied nearby where he could get at the shrubs and grass. Rudy should wake me if anybody comes close… I think. A moment later he was out cold, too tired to care.

The rain woke him before Rudy had a chance to. It had clouded over during the day, and he awoke cold, wet, and hungry. Picking up his rifle, he shrugged into his slicker, ate just enough of the meat Marge had packed to take the edge off his hunger (it was jerky, which would last him a while, if he was careful), and lead Rudy to the lakeshore for water. Swinging into the saddle once more, he rode off to the north into the night. Lingering so long near Kingston may have been a mistake, but it was, he thought, a necessary one. There’s no way I’d be able to ride a horse through here in daylight without being seen. Now he moved north, desperate to put more distance between himself and the place where he had disappeared.

The summer before, he and Becca had gone riding for a week in Frontenac Provincial Park, which, he remembered, was somewhere north of where he was now. He had rarely ridden so far to the north of the stables, yet he knew from their riding trip that only two or three major roads lay between him and the Park. “And once we get there, Rudy my friend, we can disappear entirely for a while.” The horse made no response, but continued at a steady pace to the north.

As they rode north into the wet night, Jim’s mind wandered. The memory of the riding trip had brought back others, and he was afraid for Becca. What’s going to happen to her…? They want me…might they want her, too…? He tried to force those thoughts from his mind, for he knew there was nothing he could do for her, that his best hope for seeing her again was to stay free, yet it was no use. His mind turned to other questions as well, chief among them the book he carried wrapped up in a saddle bag. Why do they want it so badly…? Who wants it…? What in it is worth killing for…? The grief of his father’s death was hard to bear, and tears came to his eyes unbidden. He rode on in silence, lost in his thoughts.

The rain lifted an instant, and flashing lights close by jolted Jim from his reverie. A police car sat there, not fifty yards away. Jim froze, praying Rudy would make no sudden moves and that his dark slicker would blend into the night. How long they stayed that way he had no idea, but for Jim it was an eternity. A roadblock, he thought. I’ve blundered right into a roadblock. As the rain closed in again and the police officer in the car made no move to indicate he had seen Jim, Jim sat his horse and considered his options. That was pavement in the glare of the headlights, he realized, and that’s a problem. He had started out riding to the north, using the lake from the night before as a baseline. But in the rain, I could be anywhere…I have to cross at least one paved road, if I remember right, but there should be another one running north, too…Which one is it…? Well, there’s one way to find out, anyways. Paralleling the road, he moved off, and hadn’t gone more than twenty yards when, over the rain, he heard the sound of Rudy’s hoofs on pavement, and glancing up, he could just make out, through the rain, the shadow of the T-intersection. That answers that question.

He crossed over without incident, and rode on to the north, staying close enough to the road that he could see the vehicle lights through the rain. It was risky, but the only way to ensure direction in the driving rain. By the time the road he was following intersected with another one an hour later, the rain had lessened and he was forced back into the bush. Before he ducked back inside their protection, though, he caught something out of the corner of his eye. Lights…lights reflected on water…where am I…? It has to be a lake, he thought, and a big one, too…Sydenham! That’s where I am, he realized with a start. Becca and Jim had passed through the town on their way to the Park that summer, and the memory of the lake and its tranquil waters had stayed with him.

The town’s right by the water, he thought. Can’t sneak through there. In the gloom, he risked a glance at his watch. The Indiglo felt to Jim like a beacon in the night, and he stayed totally still for more than ten minutes, waiting, as his heartbeat returned to normal. Four in the morning…no time to go around the long way. And no place to camp here, either…Looks like I’ve got no choice.

Emerging from the brush, he pointed Rudy at the water’s edge and kicked him into a trot. Hard by the lake shore, he went through the town as fast as he dared. An hour later he made camp deep in the words to the north of the town.

The world was just beginning to lighten as he led Rudy back from water. The rain, which had stopped during the night, picked up again with renewed intensity. Rudy looked at him with doleful eyes as Jim tied him up for the day. “I’m sorry, buddy,” Jim said, “but I can’t take the risk.” Rudy’s saddle would stay on him for at least another day, until Jim felt secure enough to risk taking it off. He grabbed a quick bite of jerky, sipped some water from his canteen, and hunkered down under his slicker to a wet, miserable day.

He awoke while it was still light, barely three hours later by his watch, to find that the weather had only gotten worse. “Screw this,” he said aloud, and Rudy snorted in agreement. He could see barely fifty yards in any direction, and, trusting that the limited visibility and miserable weather would hamper anyone following him just as badly as it hampered him, he mounted up and rode on once more.

Time began to blur. Day and night lost their meaning in the never-ending rain. He slept when he was tired and then pushed on when he awoke, all the while lost in the midst of a gloomy, watery landscape. The warmth of barely a week before had vanished in the downpour, and Jim rode with his hands under the saddle blanket next to Rudy’s body to keep them from losing all circulation. Water found its way under his slicker, and his wide brimmed hat soaked right through. And when he dismounted to rest, it was only worse. He knew only cold, and despaired of ever being warm again. Only the landscape was a boost to him, as its ever rockier appearance assured him that he was still headed north. He pressed on, conscious only of the cold and of the need to keep moving, to avoid whatever pursuit there would be.