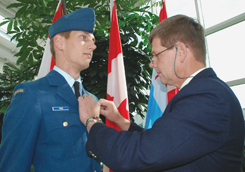 When air force officer Joel Halse was sitting in the back seat of a fighter jet speeding straight toward the Atlantic Ocean faster than the speed of sound, he wasn’t thinking of opening up his own website development company.

Ian Miller, a combat-systems engineer stationed in Halifax, had already been contemplating the idea when he could spare a moment from his naval duties.

It wasn’t until they were both home on leave and were attending the same social functions that conversations turned toward a possible business partnership.