“Pre 9/11 there wasn’t a significant consciousness of the need for Canadian Forces in the modern age. Post 9/11 everybody’s paradigm had a sort of shake, and there was a sort of consciousness that the world is not a safe and secure, take-it-for-granted, stable place,” Beare said.

“It was a pleasure to host the Honourable Rob Nicholson at 19 Wing,” said Colonel Tom Dunne, the commander of 19 Wing. “The Minister took great interest in learning more about the long range patrol and search and rescue missions that we perform and support on a regular basis.

“Our members were proud to tell him more about their individual roles at one of the RCAF’s busiest wings.”

“A lot of people in the military assume you know how to do things, that’s not always the case,” she said.

She said the first year is the hardest. “Stay strong, teamwork is super important.”

“Any one applicant will have their name in with many employers and will jump from one to the next during the process taking the best offer. This is where the competition comes in,” 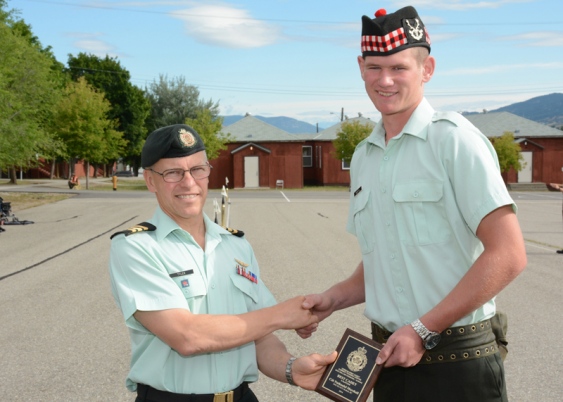 Cadet Nathaniel Marshall of Sechelt is presented with the plaque recognizing his achievement as the best cadet in his platoon during the three-week basic leadership course at Vernon army cadet Summer Training Centre by the reviewing officer, 14090  Lt. Col. Kevin Tyler, commanding officer of the Rocky Mountain Rangers. – Wayne Emde Photo –  Article