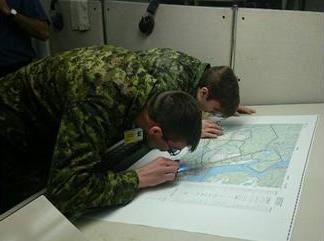 The third year Civil Engineering class began the 2015 Survey Field School at RMCC on the 20th of April. Surveying is a means of making relatively large-scale, accurate measurements of the Earth’s surface. The Survey Field School is a two week course where the students are able to apply the theory learned from the Introduction to Geomatics course to different surveying tasks such as levelling and route layouts. The aim of this course is to allow the civil engineering students to develop their technical abilities, leadership, and management skills in a practical environment.

The class was broken into four groups to allow the largest area of the RMC campus to be surveyed. Many of these 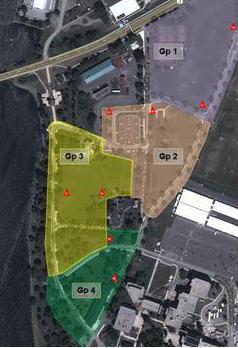 groups worked tirelessly over the span of the demanding two weeks in order to produce quality engineering daily reports and back briefs. Each day, the class gathered for a team breakfast at 07h00, prior to the extensive day that lied ahead. On day one, an introductory brief was conducted by the course OPI, Capt. Gallant, as he outlined his high expectations for the course. Each group was assigned different Areas of Responsibility within the RMC campus.

Due to the demanding schedule and requirements of the course, surveying methods were performed daily despite the weather forecast. Although this course took place at the end of April, the students endured bizarre weather including rain, freezing temperatures and even hail! Daylight is to surveyors as rain is to farmers. That being

said, the students did not have enough time during the day to brave the CDH lunch line. As a result, the RMCC kitchen kindly supplied soup, coffee and box lunches for the officer       cadets throughout the day. The teams would often stay out in the field until dusk in order to gather as much information as possible and take advantage of friendly weather. Each day brought different challenges and tasks to each team.

with designing a curved route within their respective area. This was completed using leading edge technology such as the differential global positioning system.

Furthermore, each team was responsible for a final project. The purpose of these projects was to provide instructional lectures on the tools used throughout the course. These projects were presented on the final day of week 1 and ranged from an instructional video on how to set up the surveying equipment to the history and purpose of different map projections.

Week 2 of the Survey Field School started with a tour of the Mapping and Charting Establishment (MCE) located on 615 Booth Street in Ottawa. This visit was very intriguing as many of the students were un-aware of MCE. This day allowed the students to understand many different stages in the development of maps within the scope of the Canadian Armed Forces. The students toured the many departments within MCE for example, the acquisition of data, production, and surveying related to maps. There were many highly qualified guides who gave us tours of their respective fields. Overall, this day was greatly appreciated and opened the eyes of the students to the many different opportunities within the CAF. Upon returning to RMCC, the normal routine was commenced and many teams were back out in the field in no time to collect more data.

The Survey Field School of 2015 provided an excellent opportunity for the civil engineering students to gain valuable in-field experience prior to commencing their projects in Wainwright, Alberta. The students learned to work as an effective engineering team and develop key leadership skills. The final design of a route in each AOR was completed and presented to the class. The teams learned how to produce professional engineering reports in a timely fashion without compromising quality. It is important to note that not all of the students in the third year civil engineering class are going in to engineering trades within the CAF. The class is comprised of students in a diverse range of trades from Construction Engineering Officers to Air Combat Systems Officers. At the end of the course, the most valuable lesson was learned: how to overcome adversity and keep moving forward with the task at hand.