25366 NCdt (IV) Mike Shewfelt recently had the opportunity to correspond with 17834 Jim Fasano on his life and career since he graduated from RMC in 1991. 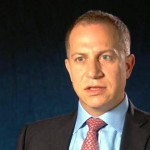 e-Veritas: What have you been doing since you left RMC…?

17834 Jim Fasano: I spent five years in the military after graduation. I was a Computer Engineering major, and I graduated into the Signals trade. My time in the CF included finishing my training at CFSCE, a stint with 2(EW) Squadron at the Signals Regiment and a few years as Operations Officer at the CF Electronic Warfare Centre. After leaving the military, I went back to school and did an MBA at the University of Chicago Graduate School of Business for two years. This two years also included an internship with Goldman Sachs’ Mergers & Acquisitions group and a semester at New College, Oxford University.

Following graduation, I spent five years in investment banking initially with RBC Dominion Securities’ Mergers & Acquisitions group and then Merrill Lynch’s Media & Telecom group. Then took almost two years off to travel; much of which was done with two friends – one of which was a fellow Frigateer and the other was the sister of another Frigateer. Travel included such areas as: South America; Southern Africa; Nepal; Tanzania; Mongolia; Russia and many more.

e-Veritas: You also took time off to travel, did you not…?

17834 Jim Fasano: Yes, I did. I took two years off to travel after my time with RBC Dominion Securities and Merrill Lynch. Along with 17854 John Holmes and Christine Dube, sister of 17828 Eric Dube, I travelled to South America, Southern Africa, Nepal, Tanzania, Mongolia, Russia, and many other places.

e-Veritas: And where are you at currently…?

17834 Jim Fasano: I have now been with the CPP Investment Board for over seven years, including two years spent in the UK. I am currently the “Vice President & Head of Principal Investing” where I oversee a team of 35 across 3 offices (Toronto, Hong Kong, London). We do private equity and have a growing portfolio that is currently approximately $7 billion.

On a personal note, I have been married for 5 years and have two daughters: a three and a half year-old and an eight month old.

e-Veritas: What were the highlights of the time you spent in the CF…?

17834 Jim Fasano: Several memories stand out for me. These include being involved with the creation of a new unit (the CF Electronic Warfare Centre), having the opportunity for overseas training including the NATO School (Oberammergau) and the Royal Navy School of Maritime Operations, and spending time in the field with 2(EW) Squadron (1CSR). The two schools were my first real international experience and opportunity to work with officers from other nations.

e-Veritas: Any highlights from your civilian career…?

17834 Jim Fasano: Being named as head of the Principal Investing team at CPP Investment Board (CPPIB), and having the responsibility for a team of 35 professionals and over $7 billion in investments definitely stands out, as does getting the opportunity to work and live in New York (with Goldman Sachs) and London (with CPPIB) in addition to Toronto. While with CPPIB, I have lead deal teams for some of their largest investments (Skype, IMS Health, etc.), and I have also built out their Private Investments department from 8 people to over 140. I also enjoyed the semester I spent at Oxford University on exchange while at business school.

e-Veritas: Going back to your RMC days, what are your favourite memories from the College…?

17834 Jim Fasano: Winning the Governor General’s Award for top academic graduate certainly stands out for me, as does the tight group of friends I had in the Stone Frigate. One of my favourite memories is our “Back in Blue Night.” Our entire Fourth Year class had been breached, and as punishment we had to wear 4’s in town for a month, which is what the First Year’s also had to wear. We decided to have some fun with it and organized a huge class party at one of the bars downtown that we called “Back in Blue” night.

e-Veritas: Did you play any sports while at the College…?

17834 Jim Fasano: I was very involved with hockey while at RMC, playing 3 years with the Varsity team. I continued to play extensively until a few years ago, also playing with NDHQ for four years, including at Nationals.

In my last year at the College I played Intramural soccer, which reignited in me a passion for the game after I had spent 7 years away from it. I also played soccer extensively until a few years ago, including with NDHQ including going to Nationals a couple of times.