Finally, a victory over Murphy’s Law

Officer Cadet Mo Smart worked from Panet House in support of many activities and projects assigned to him by the RMC Club staff since September 2013. His work commitment and finished product were always outstanding.

Last week, he left the college as a Sub Lieutenant headed to Halifax to commence a career course.

The past two years have been a bit of a roller-coaster ride for him – to say the least. During my 57 years involved in one way or another with the Canadian Armed Forces, I do not recall anyone running into so much red tape. A steady diet of highs and lows – mostly lows.

No one person or persons were to blame.

Often, I observed over the past 24 months, a flourish of Murphy’s Law in action – “If anything can go wrong, it will”. Many of us with less patience and character would have thrown the towel in months ago.

M1013 Master Seaman Murice (Mo) Smart was successfully selected into the UTPNCM program in March of 2010 as a Communications and Electronics Engineering (Air) Officer and began engineering studies at RMCC that Fall. During his first year, OCdt Smart excelled academically, even making the Dean’s list the first semester.

A recurring Degree program/ military occupation conflict and compounding medical issues beginning in his second year proved detrimental to his continued successful academic performance. The result of all this was an academic course failure occurring in third year.

Notwithstanding the support and substantiation of medical affirming OCdt Smart’s academics were compromised, he was removed from the UTPNCM program at the end of third year.

He was placed in Holding Platoon in September of 2013, where Mo was assigned to the RMC Club at Panet House until Base Personnel Selection Services (BPSS) could determine a resolution for his career.

Mo ‘redressed’ his situation to no avail. His two options were: revert to the ‘ranks’ or release.

Anyone who knows the Vancouver native would agree that he is quiet by nature and a pretty low maintenance kind of person.

During his time at Panet House he went about his day-to-day business with no fuss. Mo stepped up well beyond the call of duty many times; he greatly helped us out in countless events.

Any of us that had the opportunity to work with him on projects quickly recognized his work ethic and commitment to excellence.

Not satisfied with the decision to be removed from the UTPNCM program, he continued to challenge the bureaucracy for retention as an officer. At the same time and, on his own initiative, he enrolled in the Distance Learning program to complete the last and only credit required for a General Science Degree, which he received in June 2014.

He earned the Degree just a few weeks following the 2014 Spring Convocation. He was offered two options to personally receive the Degree – a) go to the staff college in Toronto; b) have it mailed to him at home.

All this while he was officially on strength at RMCC , part of Holding Platoon and working out of Panet House. As previously mentioned, Mo, is a pretty low maintenance kind of person and not wanting to cause a fuss accepted the second option – he received his general Science Degree in the mail at his personal residence sometime in June 2014.

During a chance conversation in the early Spring of 2015, Dr Harry Kowal, college principal became aware of the Degree being sent through the mail from the previous year. He quickly made arrangements for Mo to receive his Degree on stage in front of family & friends during this past Convocation even though it was officially conferred 26 June 2014.

A sensitive and classy move by the college principal for sure!

Over the past number of months the roller-coaster continued concerning his future occupation / trade status. Would a third option become available now that he had earned his General Science Degree? We are not privy to all the details but we are aware that it did not go smoothly – at first.

As previously mentioned, Mo, entered UTPNCM as a – CELE (air). During his five years at the college his Distinctive Environmental Uniforms (DEU) was air force blue.

When everything was said and done he was reassigned to Naval Combat Systems Engineering Officer.

He was now back in the RCN with no dress uniforms. He was able to obtain some work dress quickly. Around the same time he received word that he would be starting course – 5 Oct. Over a short period he had to go through the process of going on a House Hunting Trip – which seemed to drag on too long. He spent a week in Halifax on a successful HHT. He returned to Kingston and told that there was no way that his RCN DEU would be ready anytime soon. He would have to wait until he was in Halifax. 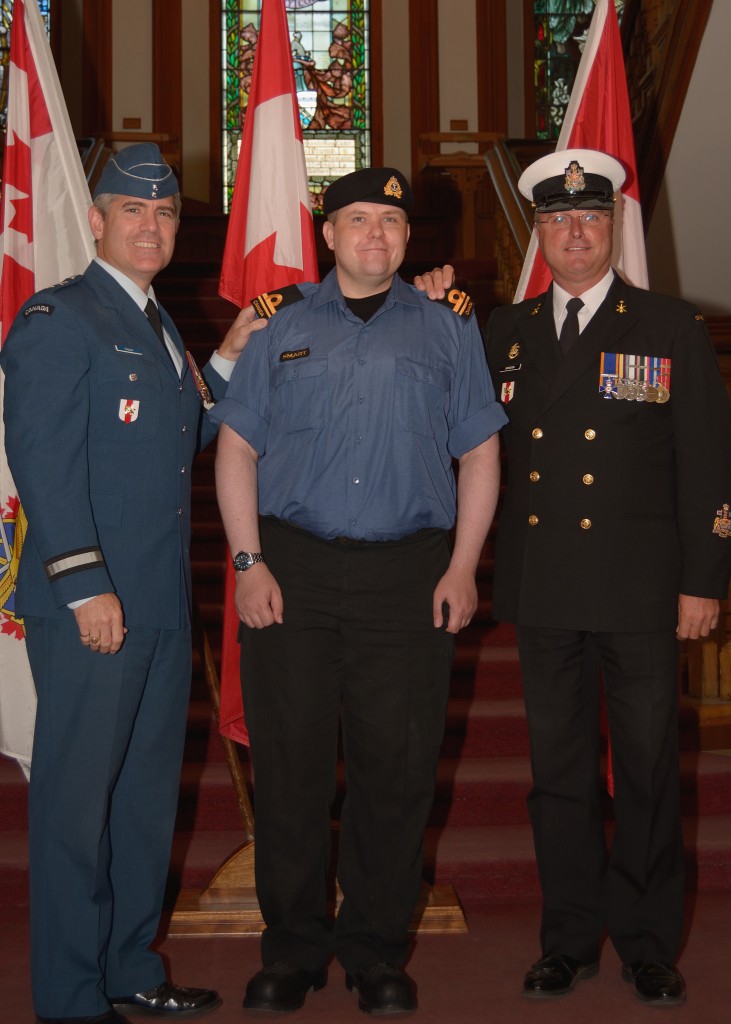 The college staff made elaborate plans for a dignified promotion ceremony in his honour.

When it came time for the ceremony, the military staff involved was dressed to the nines including medals.

Mo showed up in the only RCN uniform he had, which was his work-dress.

Obviously some in the crowd were not humored or in the know of the situation. One could easily say that the atmosphere was tense. Which was too bad because, after all, this should have been a happy occasion especially for Mo.

Nevertheless, the commandant, BGen Sean Friday, carried out the ceremony with as much dignity one would expect to see at a high profile promotion ceremony. No shortcuts took place because of the appearance of the person being promoted.

SLt Smart is now in Halifax. He is extremely grateful to the RMC Club for providing a supportive an encouraging environment to work in, for imparting the lesson of remaining positive in even the most difficult circumstances.

Further, he is extremely thankful to fellow UT’s, CF members, colleagues and friends at the RMC Club, Medical Services, BPSS and Holding Platoon for their support and encouragement that saw him through to where he has ended up.

In the end, he eventually received his Degree in a formal public ceremony and commissioned in a formal and dignified event.  Well done to all those who made it happen!

One might even say that Mo Smart although he lost many battles, actually won the war with Murphy’s Law.