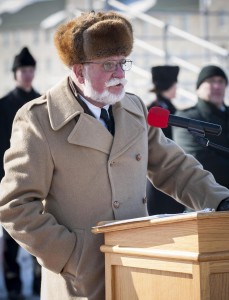 Thank you, for the introduction. Like the Commandant given this very cold day, I will try to be brief.

Fifty years ago on that Monday, 15 February 1965 it was also a very cold day. It was the date that the new Canadian flag – an impressive single red maple leaf on a white background with wide red borders – was officially unfurled across Canada.  Here at RMC, on this same spot, there was an official parade with cadets assembled much as you are doing now.  For the occasion, Commandant Air/Cmodre Len Birchall took command of the parade and read the proclamation introducing the new flag. Simultaneously there were also 100 cadets at a similar ceremony at Kingston’s City Hall, commanded by the CW sports officer, Bill Leech who later became a senior general officer.

Those events half century ago all seem so simple now. None of the current cadets were even born then; nor were a significant portion of the present military and civil staff.  As we look at the maple leaf today we do so knowing that it is the uncomplicated and attractive official Canadian flag. From our prospective, it seems always to have been there. And we honour and wear it well. But its achievement 50 years ago was not simple or serene; nor was it easy. It is was a story of personal courage, of leadership and of a functioning democratic process. It was a statement about co-operation among kindred spirits who realized it was the right moment in history and seized it.

Critical to the success of the flag, but certainly not the only ones, were events and personalities in and around RMC.  Two of the central figures among many were Col. John Matheson, the MP for Leeds and  parliamentary secretary to Prime  Minister Lester B. Pearson, and  Col GFG Stanley renowned historian, Head of the History Department and Dean of Arts here at RMC. The two men were also friends and had many similar interests. They were both veterans of WW II, had a passion for Canadian history and heraldry, and believed that Canada needed its own flag – one around which all Canadians could rally irrespective of background.

The other central figure is the Prime Minister Lester Pearson had been elected to a minority government in 1963. Sensing both a rising national self-awareness and  certain strains in the unity of Canadians, he had promised them  that he would get a new Canadian flag, one unique, simple and attractive to all.  In spite of the political risk to his fragile minority government from a fierce opposition in Parliament and out, Pearson had the courage to push ahead.  But by early spring of 1964, amid increasing controversy, there was no consensus on the flag issue.  Indeed, since the Great War there had been several attempts to get a truly national banner, but they went nowhere.

However, over the years Stanley and Matheson had often discussed this subject. In mid-March, 1964 in a happenstance meeting in Ottawa, the two men once again talked of the flag, and Col. Matheson encouraged Dr. Stanley to send him a memo on his ideas about flags and national symbols.  In the meantime, the Prime Minister championed a design offered by Allan Beddoe, a veteran, a graphic artist and flag enthusiast. His rendition consisted of 3 red maple leaves joined at the stem on a white centre flanked by 2 blue borders. Ultimately, in the acrimonious political fallout, this design became known as the “Pearson Pennant”.

A few days after their chance meeting that March, Stanley put his thoughts in a memorandum to Matheson. The new flag, he said, must be immediately recognizable, and be simple enough that any school child could draw it. It should use a non-divisive but well-recognized national symbols like the maple leaf and carry the official red and white colours of Canada. His memo even included sample drawings similar to the College flag but with the mailed fist replaced by a red maple leaf.  From an armorial point of view, it only needed proper twigging.  However, at that point , to others  the best candidate seemed to be  the “Pearson Pennant”. Still several weeks later when Col Matheson and  Dr. Stanley  met again, this time for lunch at RMC,  the prickly issue of flags once again came up. On the way across the parade square, the Dean pointed to the  College banner atop the MacKenzie Building and made  the prophetic comment, “there, John, is your flag”, then he gave all of the arguments why.

Never the less, in search of a political and public consensus  the flag controversy moved on  into the summer of 1964 with “Pearson’s Pennant” in the forefront   That June, the  overly optimistic but  persistent Prime Minister took  his ideas to the  annual convention of the Royal Canadian Legion in Winnipeg  hoping to win over veterans. But it was a hostile audience and he was soundly booed.  In Ottawa, debate in the Commons soon became deadlocked.  Hoping to circumvent the impasse Pearson formed an all-party flag committee.  Col John Matheson was a member and a strategic one at that. However, by that autumn, after considering thousands of submissions, the group made little progress.  Clearly some compromise was needed.

Toward the end of October 1964, that hurdle was overcome when Colonel Matheson discreetly put George Stanley’s flag designs among the many submissions. He also got the PM privately to accept an alternative to his beloved “Pearson Pennant”.  Then using solid argument and all his political skills, especially in securing NDP members support, the flag committee voted on three final designs – one the “Pearson Pennant”, one other and Stanley’s as the third. It won unanimously. And this is what went to Parliament for approval.

Ultimately the Parliament had to vote on it. The debates started in late November with long-winded speeches intensifying and often running late into the night. By mid-December, the PM imposed closure on the debate. On 15 December at two in the morning the Flag bill finally passed in a raucous but weary Commons, and an exhausted John Matheson penned a quick post card to George Stanley here at RMC, “your proposed flag has been approved by the Commons 163 to 78.  Congratulations. I believe it is an excellent flag that will serve Canada well.”

And so we come back to the ceremony here at RMC on 15 February 1965, and again at the same place half century later.  And there is still debate as one knows from the various media pieces in recent months concerning the parentage of the flag.   Not all the roles in the flag saga are equal. Moreover, there was no single place where it was all worked out. However, Lester Pearson, John Matheson and George Stanley were major personalities of the dramatis personae. And this College, and its house flag were also central as  Stanley’s 23 March 1964 memo  makes  clear. So too was the political tenacity of Pearson and Matheson who had the vision and skill in their various other venues.  As is often the case,  –  and in a particular ‘Canadian way’, competing but stalled positions can often lead to a solution by compromise.  If politics is the art of the possible, the Stanley‘s ideas made sense and were not deemed partisan. Matheson’ recognized that and gave them political life.  Along the way to the final version, many, many others contributed. Their names are too many to mention here. Some gave up their own views for the sake of the whole; some had the vision from the start; others added their expertise in colour, design or heraldic detail.

Perhaps the last word should be given to Col. Matheson when in 1991, he commented on the occasion of the placement of the historic plague on the corner of the Currie Building behind this parade: “Canada’s flag …. he said…represents contributions  of loving hands extending well over a century”.

For sure in 1965, the task was never as clear cut or as simple as just raising a new flag. It took courage, and it tested much of the national fabric. It demanded leadership  and  a democratic forum. It was achieved by kindred spirits who were willing to compromise and who knew the moment was right.

So for those of us fifty years later, as we honour the flag and wear it, we must remember its beginnings.

Dr Haycock came to RMCC in 1975 as a history professor and remained at RMCC until his retirement in 2008 but continued to teach until 2012 in the War Studies graduate school and he is currently Professor Emeritus of the Military History and War Studies department.

During his 37 years at the College, Dr Haycock held several key institutional positions such as Chairman of War Studies, Head of the History Department and the Dean of Arts. Dr Haycock specialized in Military History, Canadian History, “Strategic Studies” and “War and Technology” and has published several books mostly related to Military history such as the biography of Sir Sam Hughes, Canada’s Minister of Militia and Defence During the Great War.

In 1999, Dr Haycock was awarded the Chief of Defence Staff and Deputy Minister of National Defence’s Commendation for Leadership in Reforms in the Military Education System.” In 2012, he was awarded an Honorary Doctorate from RMCC for his invaluable contributions as a leader in promoting the study of military history and military education both at RMC and internationally. Dr Haycock has played an instrumental role in shaping the modern Royal Military College of Canada, especially in the design and expansion of the College’s Distance Education Programmes at the graduate and undergraduate level.

Dr Haycock is currently serving as one of the founding Directors of “the Friends of Point Frederick ” and serves as a member of the RMCC Heritage and Museum Committee.