Impressions of a Class of ‘61 Old Brigader

Every member of the Class of ‘61 knew that we had no business joining the Old Brigade.

As cadets we had encountered specimens of the Old Brigade-venerable but slightly decrepit, with college numbers like 102 or 204. Whereas we are young, active, tough-ready to challenge the recruits in the obstacle race, except we are too well dressed to engage in such a muddy enterprise. For the Class of ‘61, sixty years from year of entry seemed more appropriate for entry into the Old Brigade.

Friday evening’s reception brought a flood of familiar faces with desperate attempts to catch up on the news accumulated in an absence of 40 years or 30 years or 20 years with a developing realization that absence had made the heart grow fonder and that a lifetime of striving, honours, accomplishment and disappointment had become almost irrelevant. We were again cadets together and the years had melted away.

This engaging mingling of past and present delayed my recognition that my arthritic right hip was clamouring for rest. The counter-compulsion to greet old friends kept me on my feet (Gosh, there’s Ken, my old room-mate, companion of ordeals and crises, still trim, neat, and ready for inspection!) The talk went on until my hip would brook no further delay and deposited me on a grateful couch.

Especially engrossing were classmates who came so far to be with us. Roger Buxton and Roger Blake from Australia; Bill Robinson from Spain, Wayne Hammond, Ken Murata, Brian Smith, Herb Widdifield, Gerry Reid (with two beautiful daughters) from the west coast, Carl Krisjansen from Florida, indeed the gleanings from the (mainly) civilized world met on that late September weekend in Kingston. 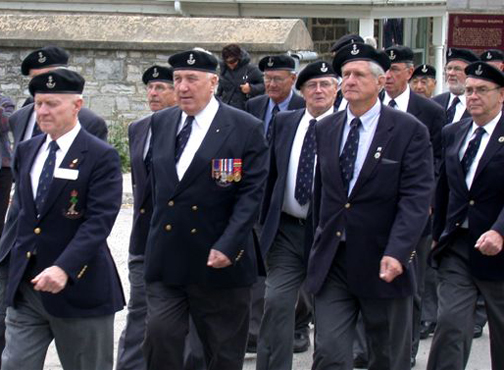 Members of the Class of ’61 entering the Old Brigade
And their wives were tributes to a sensitivity and discernment clearly not beyond the capacity of most of my class-mates. Women of charm and accomplishment, good-natured if a little bemused at their husbands’ peculiar friends, suffered us benignly. Stalwart and foremost among them is Gail Money, her presence alone reminding us of the respect and consideration owed to the widows of fallen comrades.

Saturday morning parade, and I’m saving a seat for my wife in the coveted Old Brigade section with its comfortable chairs, knowing that every three minutes Erika spends in Panet House is costing at least $100: she chooses gifts to keep RMC prominent in the minds of grand-children in Edmonton-so it’s money well-spent, I suppose. The cadets out there on the square remind us of us-but there are so many more of them! And the band-with a rich and competent sound- playing “Precision” and the “Tri-Service March,” a tribute to navy, army, and air force traditions. Our esteemed pipe band of the late 50’s could not manage these works and we had to call on the band of the Corps of Signals to accompany our march pasts on important occasions.

This year’s recruits had survived their extended and comprehensive initiation to the College (that culminated with the obstacle race) and were ready to join the Cadet Wing. To symbolize this transition, members of our class presented the recruits with official College cap badges and so the Class of 1961 met the Class of 2011, applauded their endurance, and wished them well as fully-fledged members of the Royal Military College. The recruits joined their squadrons and the parade ended with an impressive march past, reminiscent of the many march pasts we had endured and remembered with pride. The College’s past continues into the present.

The class lunch at Fort Frontenac offered a super meal and more opportunities to chat. It ended with a short business meeting that featured a firm reminder from John Lawson of our class’s responsibilities to the College and to our class. On this landmark occasion, the anniversary of our entry as recruits, we must give generously to projects that serve the College. 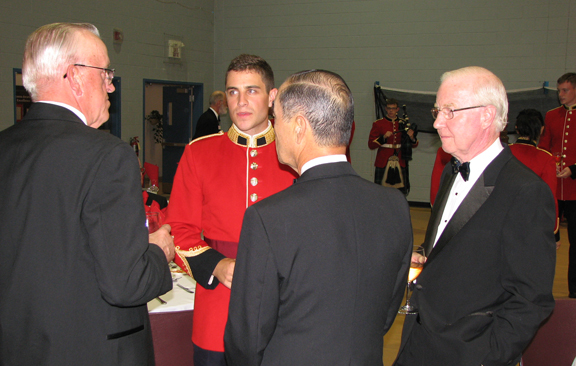 Members of the Class of ’61 mingle and chat with members of the RMC varsity fencing team many of whom volunteered with their head coach, Patricia Howes, to be “hosts” at the Saturday night Old Brigade Dinner.

Saturday evening and we are recruits again, performing a mini-cakewalk to entertain our seniors and mark our entry into the Old Brigade. Our contribution to the occasion is a rousing singsong ably led by Digger MacDougall and ending with the class yell, “Viva Collegio,” a souvenir from the 1960 visit to Mexico. After dinner the Old Brigade ambles together into the main hall where our juniors, the ex-cadets there assembled, give us a standing ovation: they are all so young and earnest that fifty years from entry now seems a long time indeed.

Sunday morning and it is our turn to march. Formed up, our class constitutes our own squadron, on our right, our seniors, occupying the right of the line. The years melt away as we come to attention, check our dressing, move to the right in threes, and step off together, all with precision as if we had done it countless times before. At the Arch, the accustomed hymns and the familiar service of tribute to the fallen draw us into a long fellowship with cadets of past, present, and future, eager to serve Canada, whenever and however our country needs us.

We march back to the square, some of us trying not to limp after two hours on our feet but strengthened by the cadets lining the route to honour us. A few more speeches and two presentations of swords honouring and remembering recent sacrifices of ex-cadets in Afghanistan, and we are dismissed to make our individual ways to lunch or back to our homes, warm and glowing from an extraordinary weekend of comradeship and reawakened memories.

We also parted, grateful to the Kingston contingent, Phil Antonsen, Tony Downs, Andrew Robb, Ken Parkes, Digger MacDougall-assisted by John Lawson and our esteemed Class Senior, Dick Byford. They may not want to hear it, but some of us were talking of a mini reunion in two years’ time.