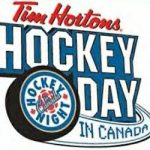 Royal Military College of Canada and Queen’s University were featured during a national television segment on CBC’s Hockey Day in Canada last Saturday.

The three-minute segment highlighted the hockey rivalry between the two schools in particular the Carr-Harris Cup which was played on February 6. RMC forward Paul Bradley and RMC head coach Adam Shell were interviewed.

To view the segment online visit click HERE. Type RMC in the search box on the right and hit the little magnifying glass icon and it will pop up.

Red Carpet Adjudant: In His Own Words;

Is There Poor Grammar At RMC?