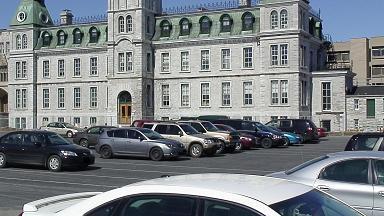 Grad parade to be moved to Hogan’s Alley & Ridout Row

Senior sources from within DND have told e-Veritas that the RMC Parade Square will become a year round parking lot. The decision was made at the highest levels in Ottawa.

Currently most staff uses a parking lot near the Navy Bay sports fields that is about 500m from the main working areas at the College. The Parade Square is less than 50 m away.

The senior DND bureaucrat, who did not want to be named, explained that this decision was based on the need to increase efficiency: “…by shortening the distance from the parking lot to the workplace we expect employees to attend their work stations earlier, gaining us valuable work hours and increasing our corporate output.” He also added that shorter walks “diminish the risk of falls and other debilitating injuries.”

When asked – What about the Parade Square being used for parades? The Ottawa official replied “…that an area designated for parking usage would not be used for other purposes and it would be unreasonable to expect employees to make concessions simply for ceremonial purposes.”

The leadership at RMC apparently is not pleased with the decision but refused our offer to comment.

The new location for ceremonial parades such as Graduation and Reunion Weekend will now be held in the Hogan’s Alley and Ridout Row.

To All – Thanks for the tremendous feedback.  As we write this at 1600 hrs – EDT – April 1st.  We do hope you had a good laugh at our effort for an April Fools Day joke.

We will print some of the priceless feedback we received in the next edition #15 slated for Monday 6 April. We promise not to print any names, just the comments.

Once again, we hope we were able to bring at least a little levity into your day.

Catching Up With the News;

Ex Cadets in the News;

Please note, Karen Inkster and her RRMC articles will return next week.

We received a suggestion to highlight Newsletters from various classes. While the newsletters wouldn’t necessarily be of wide interest classes of a similar vintage may find them of value and interesting.

Some classes have a newsletter published every couple of months; some others on a less frequent basis; and still others – never. We did a quick check of as many classes as we could Here

We note a number of classes have their own group on Facebook.