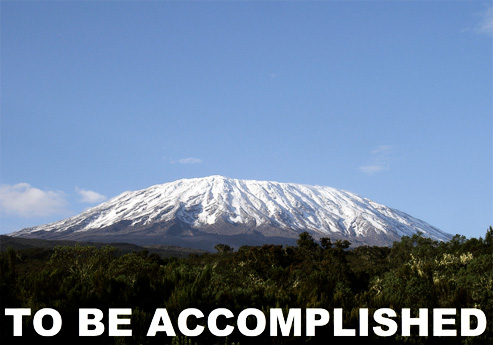 Next week, 27 December, the RMCC Expedition Club will embark on its maiden mission: the 2011/12 Kilimanjaro Expedition. The team of 10 cadets is set to climb Mt. Kilimanjaro in Tanzania via the hardest route in the shortest time possible with zero reliance on porters or man-made infrastructure. The Club will also participate in educational tours in Kenya and Rwanda in order to gain first-hand knowledge on the effects of poverty, poaching, tribal conflict and child soldiering.

This mission is complemented by its smart humanitarian fundraising component, the establishment of the Summit Scholarship in partnership with Child Soldiers Initiative founded by RMCC-graduate LGen (Ret) Romeo Dallaire. The scholarship of $20,000 will allow a former child soldier to study at a Canadian university as part of his/her rehabilitation and reintegration program. Fundraising efforts, including a 5k run, silents auctions, hockey tournament, pub nights and noteworthy private donations, have been very successful and the $20,000 objective is very close to being met with the scholarship finalization date in late January 2012.

With every “pre-deployment” precaution in place during planning and preparation phases, the Expedition Club will be raising the RMCC flag at the top of Africa on 06 Jan 2012. Best of luck to the team! Team bios

Staying Relevant & 2011 – The Year of Change – Looking Ahead

The “M” is Definitely Back

The Week That Was…& More

Catching Up With the News / We get emails

We have shut-down our plans to coordinate a Fan Bus for the 4 Feb hockey game at West Point.  A contract for over $4,200.00 was required to reserve the bus; to hold 25 motel rooms, confirmation would be required prior to 4 Jan. As of 20 Dec we only had a total of 10 people who had expressed interest.   We wish the team much success as this hockey series resumes after a long abscence.  Previous notice on the proposed trip

Donations to the Foundation at:  http://www.rmcclubfoundation.ca/WaysofGiving/DonationFormsAssistance/tabid/79/language/en-US/Default.aspx

Check out the Club Web site

Check out the Foundation Web site