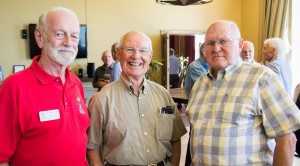 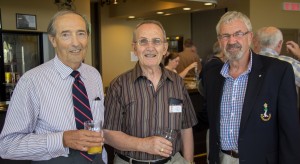 Caption: As per usual many members of the Kingston Branch mingle and catch up on the news prior to sitting down for lunch.

The Aboriginal Leader Opportunity Year (ALOY) program just launched its seventh year at the Royal Military College of Canada. Specifically, it was created in August 2008 to provide a military education and learning experience for members of aboriginal communities in Canada.  For someone who has been around since the beginning – “You’ve come a long way, baby.” 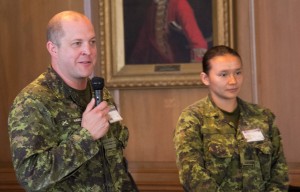 The Kingston Branch during their monthly September Luncheon, organized a very interesting presentation which was led by C Division Commander, Maj Jon Hamilton, a member of the Princess Patricia’s Canadian Light Infantry (PPCLI). He was accompanied by 2013 ALOY graduate OCdt Alura Castle from Vancouver, British Columbia. OCdt Castle is now entered in I Year and is currently going through the rigorous First Year Orientation Program (FYOP).

All in attendance were grateful to receive a first-hand account of what has become a very successful program. ALOY officer cadets sign a formal one year contract; they are actually on the RMCC grounds for a 10 month program which involves: university level study, military training, athletic development, and aboriginal culture.

Currently there are 17 cadets as part of the 2014/15 ALOY program from almost every region of Canada. The overall purpose of ALOY is to provide a highly positive, productive & preparatory educational and leadership experience.

The 39 year old, 14 year CAF veteran who was born in Peterborough, ON stressed the point that ALOY is not a recruiting tool for the Canadian military but rather an opportunity to instill the importance of service to Canada. Past graduates of the program have provided ervice to Canada in a number of ways, including positions at the community, provincial and federal levels.

One of the intangible benefits, ALOY has opened the door to a better understanding of Aboriginal culture by non-natives. For example, at RMCC, there are a number of aboriginal cultural events that are held throughout the school year that are open to all staff and students to participate including, sweatlodges and smudges.

Following the formal presentation a number of questions were asked by members of the audience to both Major Hamilton and the well spoken OCdt Castle who handled them with ease and grace.

All in attendance agreed it was a great and interesting topic; most of us left with a much better understanding on the value of ALOY.

A tip of the cap to Branch Secretary, Andrew Robb who organized the event and coordinated and arranged for the two excellent speakers..