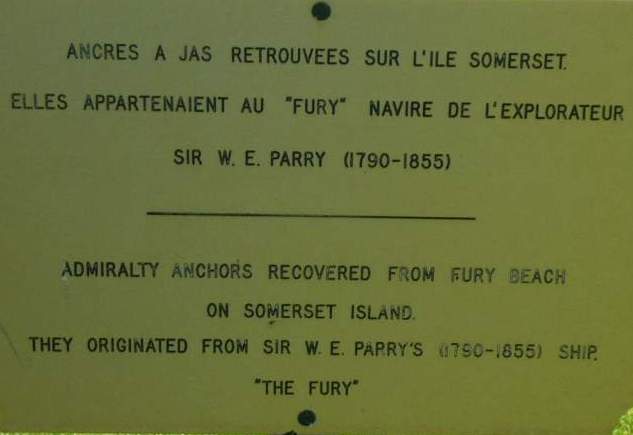 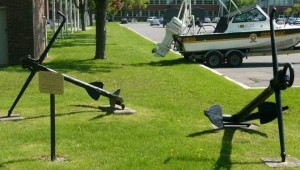 1. An Admiralty anchor recovered from Fury beach on Somerset Island, which originated from Sir W.E. Parry’s (1790-1855) ship, “The Fury” is located on the northeastern corner of the parade square at Royal Military College Saint-Jean.

The anchor was part of the HMS Fury, a vessel under the command of William Edward Parry, who was a British pioneer in the exploration of the Canadian Arctic Archipelago circa 1820. In 1825, the ship was trapped in ice and abandoned on Somerset Island (Fury beach) in the present Nunavut. 2. The starboard side anchor of HMCS Bonaventure was donated by Maritime Command 6 May 1998.  It too is located at Royal Military College Saint-Jean.

The significance of this anchor is that it is one of the two anchors of the NCSM Bonaventure (CVL22), a Majestic-class aircraft carrier. First built for the Royal Navy as HMS Powerful, this aircraft carrier served Canada from 1957 to 1970. It was the last aircraft carrier to serve Canada. Thanks to Eric Ruel, Curator, Fort Saint-Jean Museum and E3161 Victoria Edwards for the photos, descriptions and the article.