The Foundation recently received a request from the RMC Skydiving Club for financial assistance for a proposed trip to Zephyrhills, Florida during which twenty members would attempt to qualify for their “solo” licences and five would upgrade their qualifications to an “A” licence. Although the Foundation supported the nature of the request, all of our discretionary funds had already been committed during the time frame involved. As a result we sent out an email message to the alumni of the Colleges seeking donations in support of this project.

The email generated a response; a number of donations were received – but a number of serious questions and concerns were also raised by some ex-cadets. The questions that were raised fell into four categories:

 Can the Foundation Executive Vice-President take it upon himself to decide what activities fit within the Margin of Excellence?

 The College recently changed its list of Varsity Teams and in so doing deleted a number of teams or changed their status to being competitive Clubs. Shouldn’t the Foundation support the Varsity Teams that were retained rather than those that are now Clubs?

 What is special about the Skydiving Club? Does skydiving contribute to the Margin of Excellence?

 Are these donations going to the Foundation or to the Skydiving Club?

 How would the Canada Revenue Agency view the issuance of tax receipts for this support?

 What is so important about this trip? Why is it a worthwhile activity?

 Does this project meet the Margin of Excellence criterion?

 Has the Commandant indicated that this is high on the College priority list and supported by non-public funding? Does if fall within the College’s needs and priorities?

We feel that these questions and concerns should be addressed as they deal with some very important elements of our business model and the fiduciary duties that we fulfill as a charity and as trustee of donated funds.

The Foundation exists to serve the interests and objectives of the Royal Military Colleges so any examination of our role and objects must start with those of the Colleges themselves.

The stated mission of the Royal Military College of Canada is, in part:

“to produce officers with the mental, physical and linguistic skills, capabilities and the ethical foundation required to lead with distinction in the Canadian Forces.”

To achieve this goal the Colleges challenge their students with an extensive and multi-disciplinary academic curriculum as well as aggressive leadership training and athletic programs. It is the role of the Government to fund the core curriculum and training programs necessary to allow the Colleges to achieve their mission; and any examination of the graduates of the Colleges must conclude that the College staff and faculty are achieving excellence each and every day.

But, regardless of how good a College graduate is, there must still have been room for improvement outside of any fixed curriculum or training program. Cadets will benefit from other experiences once they leave the College; they will continue to grow in maturity, confidence and wisdom throughout their careers.

Our objective therefore is:

The stated mission of the RMC Foundation is to secure and deliver the funds necessary to Enhance Excellence in the attraction, education and training of the students of the Royal Military Colleges. In Enhancing Excellence it will be our goal to ensure that no opportunity is missed, through lack of funding, to broaden the academic, athletic, leadership and linguistic prowess of the students of the Royal Military Colleges as they prepare to become the future leaders of Canada. The Foundation also supports the preservation of the heritage of both Colleges. Representing opportunities outside of the core curriculum and training programs of the Colleges, Enhanced Excellence can only be achieved through additional financial support beyond what the Crown could reasonably be expected to provide.

This definition of our mission has changed over the years. At one point we referred to contributing to the Margin of Excellence, a term that was adopted in the late 90’s and, quite frankly, borrowed from West Point. Our new terminology was adopted out of discussions with the College leadership and their views as to the role of the Foundation in supporting their core programs.

The Opportunities to Enhance Excellence that we have referred to are outside of the College curriculum and training programs and hence will not be funded through Government budgets. In fact, Treasury Board regulations provide that while the College can accept donations, such monies may only be used for activities that are not part of normal program activities. They cannot be used where there has been a history of the activities being publicly funded.

While some gifts to the Colleges are originated by donors (e.g. Classes or Branches) these Opportunities are not identified by the Foundation but by the staff and students of the Colleges themselves. A prioritized list is developed by the Academic, Athletic and Military staff, as well as by the Museum Curator, and reviewed several times each year. Once delivered to the Foundation each item on the list is carefully scrutinized by the Gifting Committee. Questions that are asked will include:

What is the perceived value to the Colleges, the Canadian Forces and to Canada?

Those items that are deemed as appropriate are then prioritized.

The Committee will try to match each request with one of the Foundation’s existing pools of dedicated funds; e.g. a sporting activity might be matched with the Danny MacLeod Athletic Endowment or the Sandhurst Competition might be matched with the Class of ’64 Endowment, which is dedicated to that project. Items which cannot be funded by specific, dedicated funds are then re-prioritized against the Foundation’s available unrestricted funds, usually provided through general donations. At each point along the way the Foundation’s assessments and decisions are relayed to the Colleges to ensure that their priorities are being taken into consideration.

Inevitably there are more acceptable requests than there are funds available. At that point the Fundraising Committee becomes involved, examining each request and attempting to determine whether there are individuals, Classes, Branches or corporations that might have a particular interest in providing new donations to assist with each particular project. The success of this approach was recently validated when the Foundation had a $22 thousand shortfall in the funding for the RMC European Battlefield Tour. A funding request was distributed to a limit number of potential donors, one of whom stepped up to fund the entire shortfall.

At the end of the day it is the entire Board of Directors who must make the decision to expend donor funds on the list of projects recommended by the Gifting Committee. Approving the use of donor funds, whether it be to support Opportunities to Enhance Excellence at the Colleges or for administrative expenses, represents one of our most sacred trusts and is not something that can be delegated, or abrogated, by any Director.

As already mentioned, the Foundation looks to the Colleges to identify and propose Opportunities to Enhance Excellence and we expect requests to cover the gamut of Academic, Athletic, Leadership, Bilingualism and Heritage activities. Thanks to the generosity of our donors, during 2012 we were able to fund seventy separate requests for a total of $730 thousand, ranging from $25 to $221,795. Examples from each area include:

Unfortunately, despite our best efforts, at present there are always a number of projects that we truly believe would Enhance Excellence, but which we are unable to fund; and that is why we send out fundraising requests to the alumni.

While the College may structure or define its athletic teams as Varsity Teams or competitive Clubs such a distinction isn’t really relevant to the Foundation; as long as a proposed benefaction meets the tests that we apply to ensure that it represents an Opportunity to Enhance Excellence we will attempt to support it. Every request, however, must be fully supported by the Colleges with an identified OPI from the College staff. 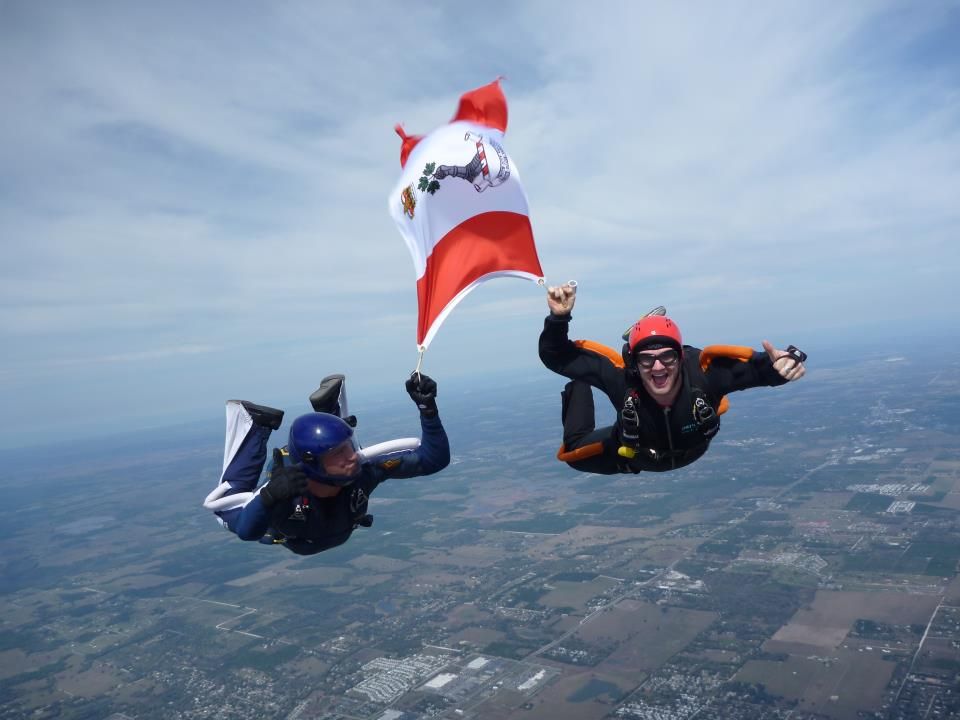 What is so Special about the Skydiving Team?

The email solicitation to support this trip was not necessarily sent out because there is anything particularly special about the sport of skydiving. In this case we found ourselves with a project that we deemed worthy, but we had already committed our available discretionary funds to other projects; our response was to send out a general request for funds.

That being said, skydiving/parachuting is a relevant military skill, still being used by Special Forces and SAR techs. As well, participating in the sport presents opportunities for cadets to stretch their boundaries and step outside of their comfort zone – always a good thing for future leaders in the Profession of Arms.

What Happens to the Funds Raised?

As with all of our donor solicitations, donations in support of this event are provided directly to the Foundation. We in turn provide funding directly to the Colleges, in this case to the RMC NPF Unit Fund, which then provides the direct support to the Team or Club. Funds contributed by donors would, of course, only be used to support the participation of Officer Cadets. Support of the Colleges is defined under the Income Tax Act (Canada) to be a charitable activity; hence the Foundation is able to issue a tax receipt for all donations provided for such purposes. 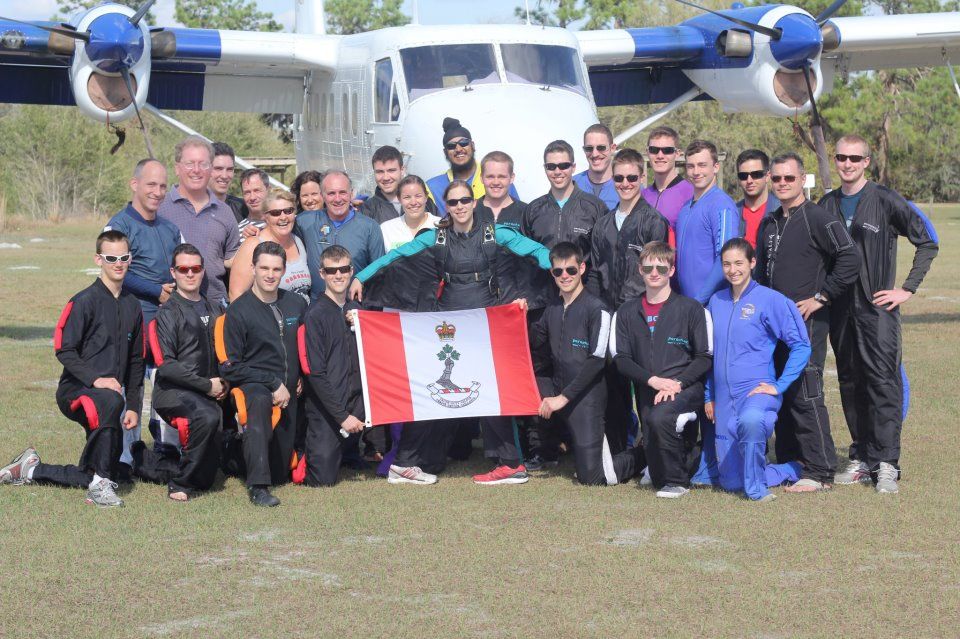 What is so Special about this Trip?

While the College does not currently have a competitive skydiving team it has in the past and teams would compete in both civilian and military competitions including trips to West Point. Qualifying up to twenty new Cadets in the sport and upgrading the qualifications of five others will help to build the skill base necessary to return to that status.

The funds requested from the Foundation represent less than half of the overall project – and we were impressed with the fact that the cadets themselves will fund the balance – demonstrating their personal commitment to the training.

The organization and execution of this trip also provides valuable leadership opportunities for the senior members of the Club.

In our view, this project represents an Opportunity to Enhance Excellence and is worthy of Foundation support. We hope you will feel the same and help us to help these Cadets to be not just the Best, but the Best they can possibly be.