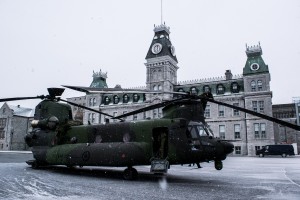 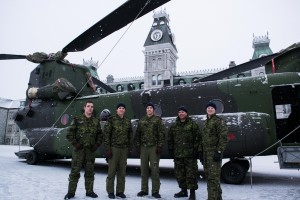 MOC weekend and all it entangles

The RMCC staff prepared a thoroughly engaging Military Occupation Classification (MOC) Weekend for the senior leadership of the RCN, Canadian Army and RCAF, to interact with their soon to be newest Officers. MOC weekend always presents a unique opportunity to connect the Cadets with their chosen service and career occupation, providing further insight and esprit de corps regarding their future.

This year was no exception. 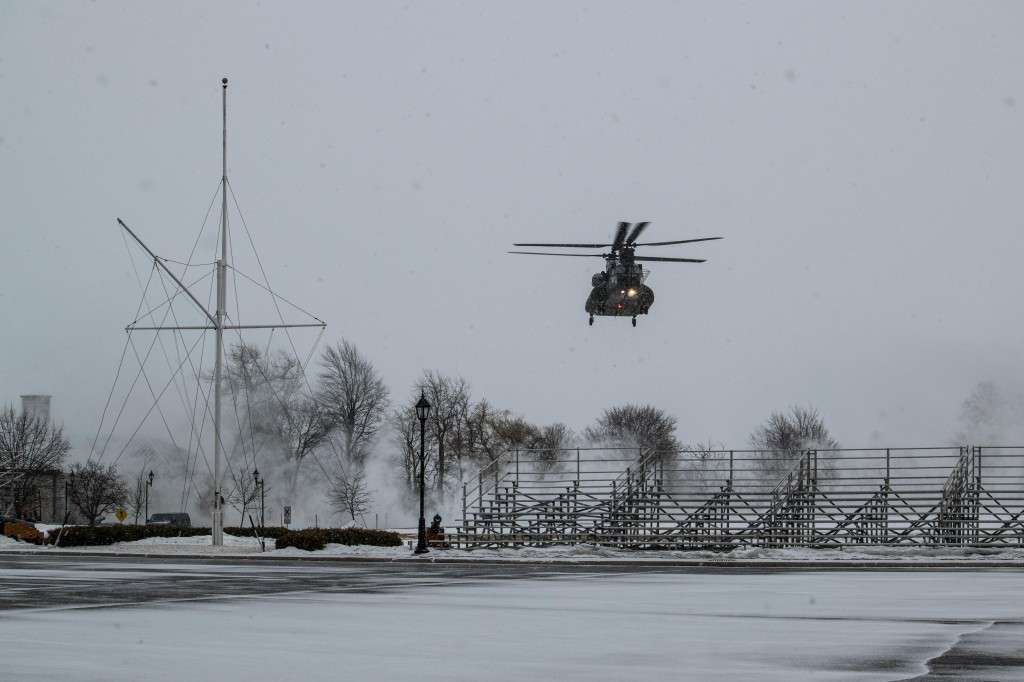 On 27-28 Mar 15, the Cadet Wing of the Royal Military College of Canada participated in the annual MOC (Military Occupation) weekend. The purpose of this event is to invite many of the most important members of the Canadian Armed Forces (CAF) to come speak to the Officer Cadets (OCdts) about their past experiences in the service and to discuss about the OCdts’ future occupation training and work after their graduate. 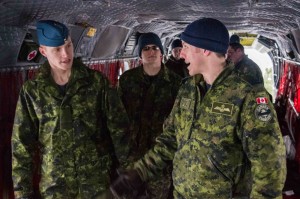 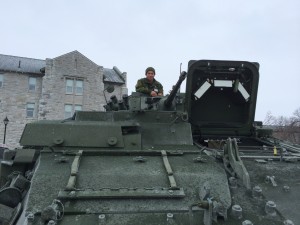 This weekend all Officer Cadets had the privilege of experiencing MOC weekend. MOC weekend consists of two days of equipment displays, meet and greets and motivational and educational briefings for all three elements of the CAF.

This year the army static display had equipment such as a coyote reconnaissance vehicle, LAV 6, M777 howitzer and various small arms. During this time Cadets also watched a chinook helicopter land on the parade square with VIPs on board.

The elemental meet and greets were great opportunities to speak with various Officers and NCOs about the challenges and rewards of their trade. These challenges as well as the exciting courses available to Officers after RMC were then explained to us in detail through several briefings.

Cadets also learned helpful information regarding the courses that they will be placed in this summer. Some examples of what they learned at the infantry briefing were strategies for preparing physically for the phase three infantry course like being able to ruck march ten kilometres with forty kilograms of weight multiple times per week at the bare minimum, or foot and ankle care during field exercises.

Overall, this weekend provided Officer Cadets with an end of semester motivational boost and helpful information on how to succeed from some of the CAF’s finest members. 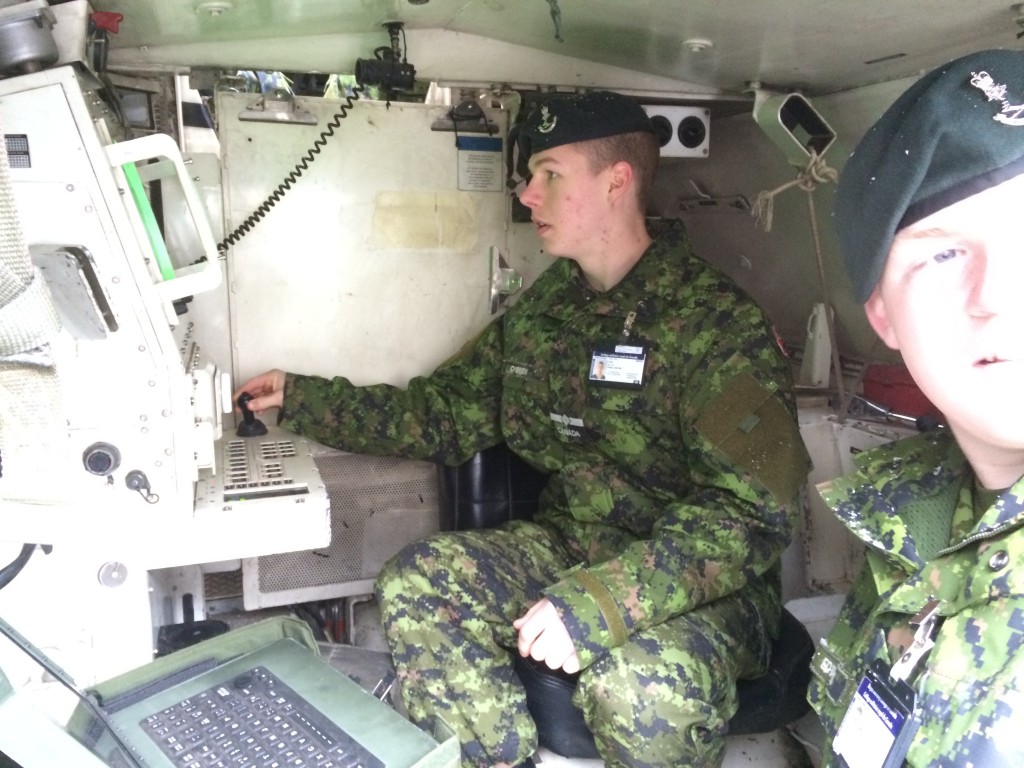 This weekend saw the arrival of Army officers from various training institutions across Canada. First to Fourth Year cadets were present Friday night for a Meet and Greet on the formal side of the cadet mess in an opportunity to approach and talk with their trade representatives.

Saturday morning saw the Army OCdts receive a general briefing on the makeup and responsibilities of the Canadian Army by MGen Lanthier. Following this, the Canadian Army Advanced Warfare Center (CAAWD) gave an eye-opening presentation on all the interesting courses offered at CAAWD. A BMOQ-L (Basic Military Officer Qualification – Land) brief provided cadets with the basic skills and knowledge to prepare them for course.

In the afternoon, OCdts were broken up by occupation and attended their respective briefings. The Infantry School staff prepared a presentation composed of briefings on IODP1.1 and IODP1.2 along with a general briefing from MWO Arsenault on what the NCO (Non-Commissioned Officer) course instructors would expect from the candidates.

In the end, the briefings provided an excellent opportunity for cadets to ask important questions to Maj Sandford and his team, giving all those coming to the Infantry School this summer the required information to prepare themselves for success. This weekend, the OCdts of the Royal Canadian Air Force (RCAF) had the pleasure to have LGen Blondin speak to us, in addition to some of the finest officers of the RCAF speak out the RCAF as well as the trades represented within it.

LGen Blondin spoke about various different experiences he encountered over his career and shared many stories about operations and how the airpersons of our internationally-respected air force responded to international need with readiness, speed, and efficiency. There are huge responsibilities for us as future officers in this prestigious air force, but the experiences and the achievements will most definitely be rewarding.

Another topic that the LGen spoke about what bringing change to the organization and some of his experiences.

Sure, there are times when change is hard, but he shared some of things that he went through to push his ideas forward and how, with persistence, change came through. LGen Blondin is known throughout the CAF as being a commander that got things done; he will be well-missed when he retires.

Following the briefs of other members of the RCAF who spokes, the OCdts were split up by occupations and were exposed to different elements of their branch and specifics on the work and the training of their occupation when they graduate.

As a Communications and Electronics Engineering (Air) Officer (CELE), I joined the CELE and Signals Officer up to at the Communications and Electronics (C&E) Branch Museum on Canadian Forces Base (CFB) Kingston. There, many of the most important member of the C&E Branch personnel spoke to us about the branch and how much pride there is both in past members (whom many continue to help out in the C&E community) and in present members.

After informative briefs by the personnel, including the Basic Training List (BLT) managers for our respective occupations, the OCdts awaiting On-the-Job Training (OJT) found out what their fate was this summer. Finally, we joined the Officers at the Officers’ Mess at CFB Kingston and there was great conversation between OCdts and the officers with pizza and some drinks.

I for one enjoyed my conversations with the officers, including one with Capt Jim French, an instructor for the CELE (Air) Basic Course.

Thank you to all the staff and guests and made this enjoyable weekend possible.” 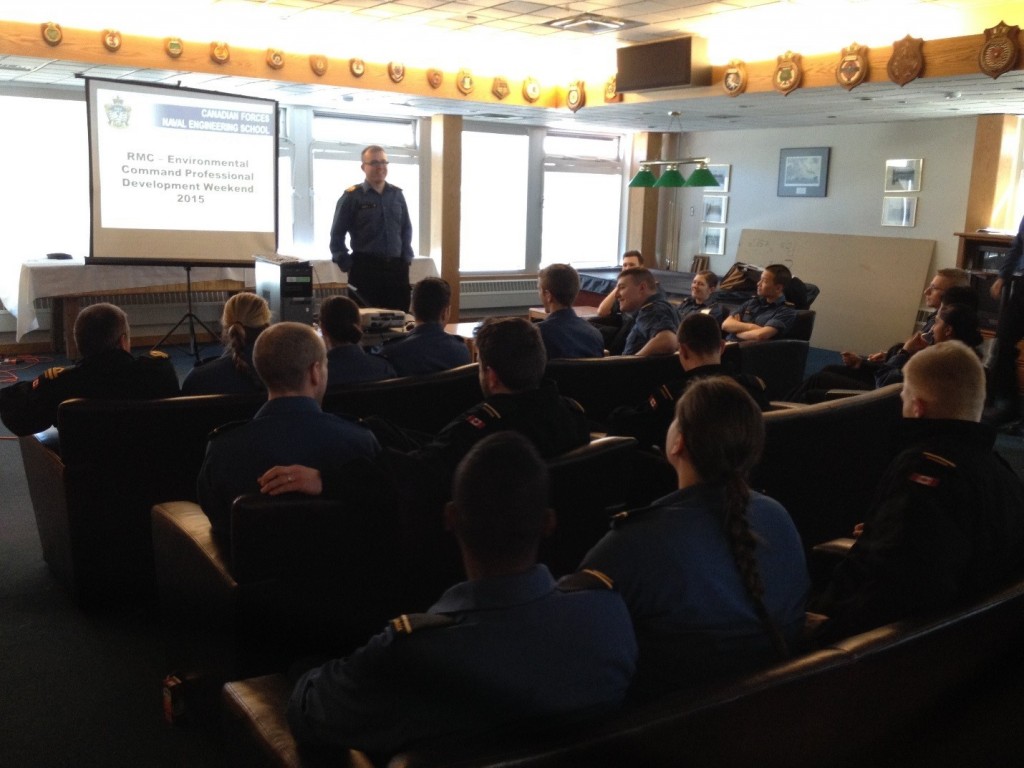 Canadian Ship) Cataraqui on Friday at 1800. This was a chance for the naval cadets of the college to informally speak with the RCN’s commander Vice-Admiral Mark Norman, as well as various other experienced officers that would be presenting the following day.

Saturday morning was full of interesting briefs about various aspects and opportunities in the navy. The subject matter of the briefs ranging from the future of the navy’s artic patrol vessels to a Q&A with Vice-Admiral Norman himself.

This weekend was an incredible opportunity for the NCdts of the college to connect with the navy and get glimpse at their future. The weekend wrapped up with individual occupation briefings designed to give NCdts a better sense of what will be expected of them on their phase training. 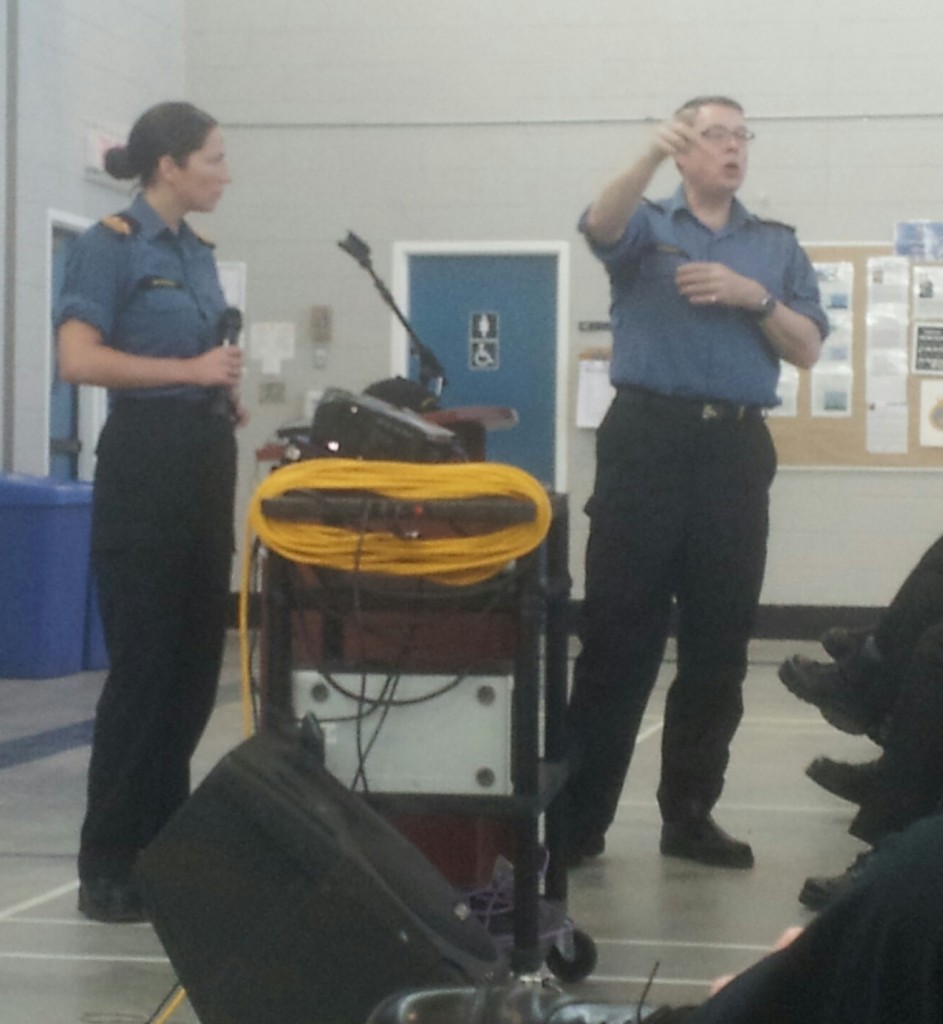 This past weekend, 28th and 29th of March, marked the annual RMCC MOC weekend, where Ocdts were split into their specific elements and received briefs throughout the morning on the Army, Navy and air force respectively.

The commander of the Royal Canadian Navy (RCN), Vice Admiral Norman, discussed with all Ncdts the future upgrades and responsibilities of the RCN. At 1000h there was a pause in the briefings so that the cadets could take part in a daily naval tradition called soup. After which the cadets learned about many operations that the Canadian Navy partakes in, such as OP CARIBBE and OP ARTEMIS. This provided insight to the future careers and aspirations of the RMC naval cadets. Photo 0 – a. OCdt Ernst is tired. He might still be thinking about last night. He’s preparing to set up the targets for the day.

Photo 1 – a. OCdt Newlands and his buddy are loading the magazines for the upcoming shooting. Surprisingly, milk crates are the perfect containers, holding exactly 40 magazines. 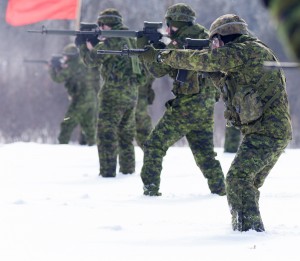 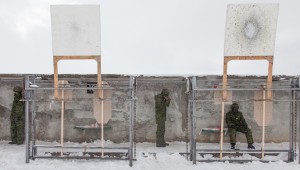 Photo 2 – a. You can definitely see all the motivation and the concentration in this shooter’s posture. It’s not always easy to shoot accurately when it’s cold.

Photo 3 – a. In the army, it’s often «hurry up and wait ». Here, these officer cadets are waiting for the shooters to finish shooting before lowering the targets and counting the number of rounds that hit it. 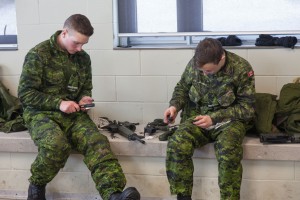 Photo 4 – a. A clean barrel is important. Nobody in the Marksmanship team wants to shoot with a dirty weapon.

Photo 5 – a. OCdt Boucher and his buddy are quietly cleaning their weapons after shooting an average of 500 rounds each. They know they’ll be shooting with the same weapon next time.

Two events and one story : Chris Miner’s pictures show it all

During the last shooting range by the Royal Military College of Canada’s marksmanship team, we had the chance to be accompanied by the famous photographer, Chris Miner, who is currently the artist in residence at RMCC. The intent was to tell the story of a typical day at the shooting range. Those who have some experience already know it, but how about the others? In fact, a day at the range does not only imply shooting the C-7. It’s also the security briefing at the beginning, the ammo declaration at the end, loading the ammo in the magazines, being in the butts to raise and lower the targets, and obviously picking up the brass and cleaning weapons. Don’t we say that a picture is worth a thousand words? Chris Miner’s photographs are worth much more. See for yourself. 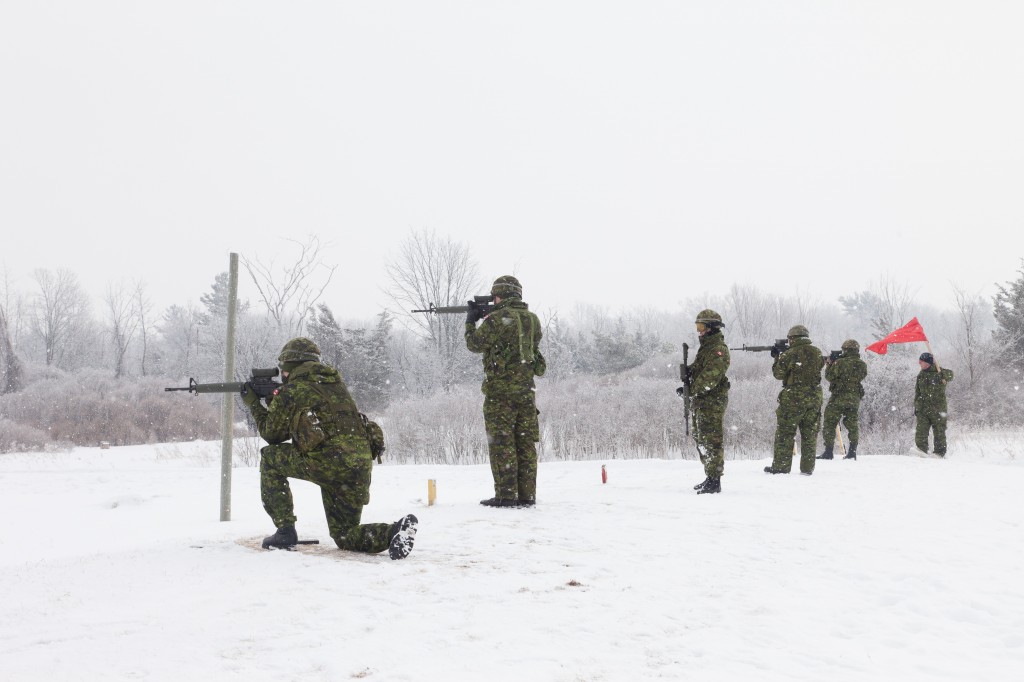 Photo 6 – a. In the back you can see the red flag. It’s a safety measure that means there is live ammo on the firing line. The snow didn’t disturb the shooters. Each bullet counts! 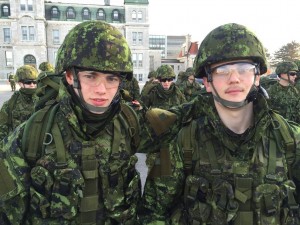 This week for PMT, first years conducted their second ruck march in preparation for BMOQ. The year was split up into divisions and marched by squadron commanders, sergeants, and other staff, all of whom gave pointers for the first years regarding success in ruck marches. 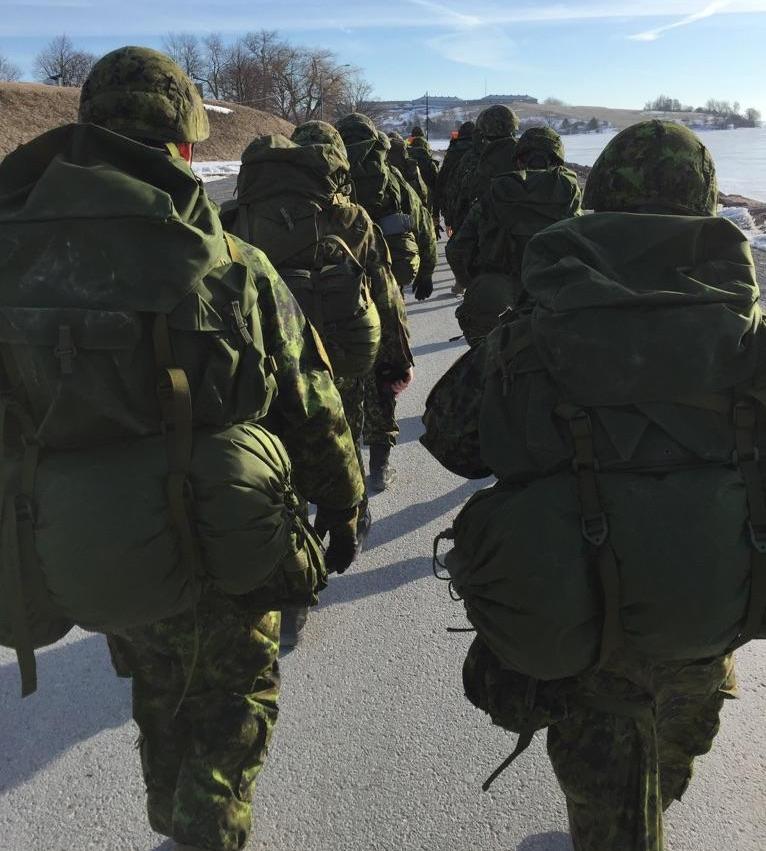 The march took place around the peninsula, working out to approximately five kilometers total, a good introductory distance for cadets who for the most part have never completed a ruck march before. Overall, Cadets have been enjoying these marches greatly, as it has provided them their first substantial taste of what they can expect this summer.

The PMT this week for third year cadets commenced with a briefing from Major Grodzinski in the New Gym regarding the rich history of mess life in the military. In this short but highly informative presentation, Major Grodzinski related to the third year cadets the history of the mess and the important role that it has played in military life, from the traditions observed in seventeenth century Britain, through to those we still observe today. From the humble beginnings of the mess, which found roots in officers attempt to share food cost by dinning together, through their evolution into the high caliber facilities that we now enjoy, the military mess has served as a critical location that has provided a place for military members to meet, dine, plan, party, and build camaraderie. Major Grodzinski’s briefing effectively convinced the cadets of the importance of the mess in their future military careers.

For the second hour of this week’s PMT, the third years reconvened in the CDH north annex to hear speeches and to cast votes for the hopeful candidates who look to take the reigns as the next class senior. Contending for illustrious position of RMCC’s class senior of the graduating class of 2016, were NCdt Jeremie Fraser, OCdt Daniel Falco, OCdt Michael Cherry, and OCdt Kyle Tilley. All gave stirring speeches regarding their ambitions and potential plans for the following, and final, academic year of the third year class. A vote by ballot concluded the event, the results of which will be known soon. 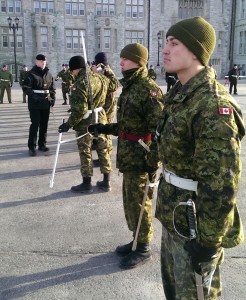 The fourth year cadets had an hour of sword drill review for PMT. This was in an attempt to prepare them better for the two weeks of graduation parade practice in early May. Remove and replace swords, the short and long salute, and slow march were just some of the movements taught on the parade square. The review lessons were taught by the Drill Cadre, which consists of cadets from all years and backgrounds. It was a strong reminder that graduation is coming quickly, not only for the fourth year cadets on parade but also the younger cadets looking forward to their summer training.