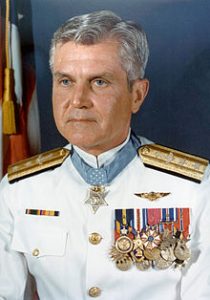 “The challenge of education is not to prepare a person for success, but to prepare him for failure.”

“Great leaders gain authority by giving it away.”

“It is in disaster, not success, that the heroes and bums get sorted out.”

“I think character is permanent, and issues are transient.”

“Do the right thing, even it means dying like a dog when no one is there to see you do it.”

“The guy that just arranges things so that the stock market holds up is nobody, in my estimation.”

James Bond Stockdale was born and raised in Abingdon, Illinois. He lettered in football, basketball and track, won a regional piano competition, and graduated second in his high school class. He was appointed to the Naval Academy in the middle of World War II. Soon after graduating in 1946, Stockdale reported to Pensacola for flight training.

Stockdale flew almost every propeller-driven aircraft in the Navy’s inventory, but he yearned for greater challenges. In 1954, Stockdale applied for Test Pilot School at Patuxent River, Maryland. Along with 17 others — including future astronaut John Glenn — he made the cut.

At Patuxent, Stockdale was a standout. He amassed more than a thousand hours in the F-8U Crusader, then the Navy’s hottest fighter. Promotions followed, and by the mid-1960s, Stockdale was at the very pinnacle of his career and profession, commanding a fighter squadron.

In August 1964, Stockdale’s squadron played a role in the Gulf of Tonkin incident, which involved North Vietnamese attacks on U.S. naval vessels. The Johnson Administration invoked these occurrences to justify a massive American military response. Interestingly, Stockdale always maintained that during the Incident’s key “engagement,” he saw no enemy vessels. In his words, “I flew so low there was salt spray on the windshield, and I still didn’t see a thing!” But the die was cast. The next morning, he was ordered to lead a raid on North Vietnamese oil refineries. America — and Jim Stockdale — were at war.

On September 9, 1965, Stockdale catapulted his A-4 Skyhawk off the flight deck of the USS Oriskany on what turned out to be his final mission over North Vietnam. Approaching his target, his plane was riddled with anti-aircraft fire. Within seconds, his engine was aflame and all hydraulic control was gone. He “punched out,” watching his plane slam into a rice paddy and explode in a fireball. Stockdale himself best describes what happened next:

“As I ejected from the plane I broke a bone in my back, but that was only the beginning. I landed in the streets of a small village. A thundering herd was coming down on me. They were going to defend the honor of their town. It was the quarterback sack of the century.” They tore off his clothes and beat him mercilessly. Stockdale suffered a broken leg and paralyzed arm before a military policeman took him into custody. He was now a prisoner of war, the highest ranking naval officer to be held as a POW in Vietnam.

Stockdale wound up in Hoa Lo Prison – the infamous “Hanoi Hilton” — where he spent the next seven years under unimaginably brutal conditions. He was physically tortured no fewer than 15 times. Techniques included beatings, whippings, and near-asphyxiation with ropes. Mental torture was incessant. He was kept in solitary confinement, in total darkness, for four years, chained in heavy, abrasive leg irons for two years, malnourished due to a starvation diet, denied medical care, and deprived of letters from home in violation of the Geneva Convention.

Through it all, Stockdale’s captors held out the promise of better treatment if he would only admit that the United States was engaging in criminal behavior against the Vietnamese people, but Stockdale refused. Drawing strength from principles of stoic philosophy, Stockdale heroically resisted. His courage was an inspiration to his fellow POWs, with whom he communicated in an ingenious code, maintaining unit cohesion and morale. His jailers increased the level of torture, so Stockdale determined to fight back in the only way he could.

Told that he was to be taken “downtown” and paraded in front of foreign journalists, Stockdale slashed his scalp with a razor and beat himself in the face with a wooden stool. He reasoned that his captors would not dare display a prisoner who appeared to have been beaten. When he learned that his fellow prisoners were dying under torture, he slashed his wrists to show their captors that he preferred death to submission. Stockdale literally gambled with his life, and won.

Convinced of Stockdale’s determination to die rather than cooperate, the Communists ceased trying to extract bogus “confessions” from him. The torture of American prisoners ended, and treatment of all American POWs improved. Upon his release in 1973, Stockdale’s extraordinary heroism became widely known, and he received the Medal of Honor in the nation’s bicentennial year. He was one of the most highly decorated officers in the history of the Navy, with 26 personal combat decorations, including four Silver Star medals in addition to the Medal of Honor.

Throughout Stockdale’s captivity, his wife Sybil campaigned for respectful treatment for the families of all POWs by founding the League of Families. Sybil Stockdale was presented with the U.S. Navy Department’s Distinguished Public Service Award by the Chief of Naval Operations. She is the only wife of an active-duty officer ever to be so honored.

After serving as the President of the Naval War College, Stockdale retired from the Navy in 1978 and embarked on a distinguished academic career, including a term as President of the Citadel, and 15 years as a Senior Research Fellow at Stanford University’s Hoover Institution. In 1992 he graciously agreed to a request from his old friend H. Ross Perot to stand with Perot as the vice presidential candidate of the Reform Party. Stockdale disliked the glare of publicity and partisan politics, but throughout the campaign he comported himself with the same integrity and dignity that marked his entire career. Together, the Stockdales told their story in a joint memoir, In Love and War. Admiral Stockdale and his wife lived quietly on Coronado Island, off of San Diego, until his death at age 81. In 2009, the U.S. Navy honored him by naming a new missile destroyer in his honor, the U.S.S. Stockdale.