Born on November 25, 1914, in Martinez, California, Joe DiMaggio started and ended his major league career with the New York Yankees. Between 1936 and 1951, DiMaggio helped the Yankees to nine World Series titles, also setting a new record for most hits in consecutive games—56. In 1954, DiMaggio married Marilyn Monroe and was elected to the Baseball Hall of Fame a year later.

“There is always some kid who may be seeing me for the first time. I owe him my best.”

“A person doing his or her best becomes a natural leader, just by example.”

“If anyone wants to know why three kids from the same family made it to the big leagues, they just have to know how we helped each other and how much we practiced back then. We did it every minute we could.” 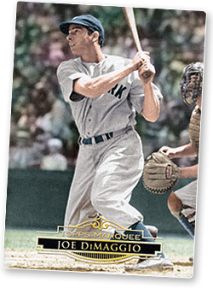 Baseball legend Joe DiMaggio was born Giuseppe Paolo DiMaggio on November 25, 1914, in Martinez, California. He was the eighth child of Giuseppe and Rosalie DiMaggio, Italian immigrants who moved from Sicily to California in 1898. The family then relocated to North Beach, a predominantly Italian neighborhood in San Francisco, about a year after DiMaggio’s birth.

DiMaggio’s father, like generations of DiMaggios before him, was a fisherman, and he fervently wished for his sons to join him in his trade. While Joe DiMaggio never had any interest in fishing, his upbringing as the son of a poor immigrant fisherman helped form his popular image as the personification of the “American Dream.” Ernest Hemingway captured the way DiMaggio’s upbringing shaped his legend in his novella The Old Man and the Sea: “‘I would like to take the great DiMaggio fishing,’ the old man said. ‘They say his father was a fisherman. Maybe he was as poor as we are and would understand.'”

Instead of following his father onto his fishing boat, Joe DiMaggio followed his older brother Vince onto San Francisco’s sandlot baseball fields, where he quickly distinguished himself as something of a playground legend. In 1930, at the age of 16, DiMaggio dropped out of Galileo High School to dedicate his life to baseball. He played daily at what was known as the dairy-wagon parking lot, a vast empty space where milk drivers parked their horses and wagons. “We used rocks for bases,” DiMaggio recalled, “and it was quite a scramble among about 20 of us kids to scrape up a nickel to buy a roll of bicycle tape to patch up the ball each day.”

DiMaggio played in a local league for a team sponsored by an olive-oil distributor called Rossi, receiving two baseballs and $16 worth of merchandise for leading his team to a league championship. In 1932, DiMaggio’s older brother Vince was signed to the San Francisco Seals, the city’s Pacific Coast League team; when the club’s shortstop was injured near the end of the season, Vince suggested his younger brother as a replacement. After playing in the last few games of the 1932 season, DiMaggio won a full place on the Seals’ roster in 1933.

During that first full season with the Seals, Joe DiMaggio batted .340 with 28 home runs and put together a 61-game hitting streak. After two more spectacular seasons with the Seals in which he hit .341 and .398, DiMaggio got his shot at the majors when he was sold to the New York Yankees for $25,000 and five players. “I would like to thank the good lord for making me a Yankee,” he said at the time. Although he had incredible natural talents, DiMaggio’s sudden rise from West Coast obscurity to the most storied team in the Major Leagues was driven primarily by his legendary work ethic. “A ball player has to be kept hungry to become a big leaguer,” he later remarked. “That’s why no boy from a rich family has ever made the big leagues.”

Joe DiMaggio made his debut as a Yankee on May 3, 1936, and during his rookie season he batted .323 with 29 home runs, helping the Bronx Bombers win a World Series Championship. The Yankees went on to win four consecutive World Series in DiMaggio’s first four seasons, making him the only athlete in the history of North American professional sports to win championships in each of his first four seasons. During his fourth season, in 1939, DiMaggio was also named the American League’s Most Valuable Player.

In addition to his prowess at the plate, DiMaggio was also a phenomenally skilled centerfielder and base runner. As fellow baseball great Yogi Berra put it, “He never did anything wrong on the field. I’d never seen him dive for a ball, everything was a chest-high catch, and he never walked off the field.” During the 1941 season, in which the Yankees again won the World Series, DiMaggio set perhaps the most unbreakable record in all of sports by hitting safely in 56 consecutive games—shattering the 1897 record of 44 games set by Willie Keeler of the Baltimore Orioles. (DiMaggio’s record for most hits in consecutive games still stands today.) DiMaggio’s hitting streak enthralled the nation, and Les Brown recorded “Joltin’ Joe DiMaggio & we want you on our side.”

DiMaggio forsook three of the prime years of his career to serve in the United States Army during World War II. Although he spent the majority of his three-year enlistment in the United States, playing baseball for the Seventh Army Air Force Team and serving as a physical training instructor, his presence in the armed forces provided a boost to military and national morale during the war years.

Following the war, DiMaggio returned to the Yankees in 1946, and in 1947 he had yet another career year, winning the American League MVP award and leading to the Yankees to the World Series while making only one error in a near-flawless season in the outfield. After winning three consecutive World Series (1949-1951), DiMaggio decided to retire after the 1951 season due to increasing pain in his heel. “I was full of aches and pains and it had become a chore for me to play,” he said. “When baseball is no longer fun, it’s no longer a game.”

During his 13 seasons in Major League Baseball, DiMaggio won nine World Series Championships and three American League MVP awards. He had a career batting average of .325, with 361 career home runs. DiMaggio was inducted into the National Baseball Hall of Fame in 1955.

Joe DiMaggio married Dorothy Arnold in 1939, and they had a son, John III, before divorcing after five years of marriage. Then, in 1952, the year after he retired from baseball, DiMaggio met actress Marilyn Monroe and fell madly in love with her, beginning one of the most high-profile romances in American history. After an 18-month courtship, DiMaggio and Monroe wed on January 14, 1954 in what the press hailed as “the Marriage of the Century.”

However, the couple’s marriage was troubled from the start. The retired DiMaggio was looking to settle down while Monroe’s career was skyrocketing. Their brief but celebrated union ended after less than a year, but DiMaggio and Monroe remained close friends. After her tragic death in 1962, DiMaggio had roses delivered to her crypt three times a week for the next 20 years. He never married again.

During his long and peaceful retirement, DiMaggio remained very much a public figure by appearing as a radio and television spokesman for various products. He passed away on March 8, 1999 from complications of lung cancer at the age of 84.

Joe DiMaggio is one of those rare sports heroes, like Babe Ruth and Jackie Robinson, whose legacies transcend sports to symbolize aspects of history and culture. New York City Mayor Ed Koch said of DiMaggio, “He represented the best in America. It was his character, his generosity, his sensitivity. He was someone who set a standard every father would want his children to follow.”

Echoing this sentiment on the day of DiMaggio’s death, President Bill Clinton stated, “Today, America lost one of the century’s most beloved heroes, Joe DiMaggio. This son of Italian immigrants gave every American something to believe in. He became the very symbol of American grace, power and skill. I have no doubt that when future generations look back at the best of America in the 20th century, they will think of the Yankee Clipper and all that he achieved.”