Article by 5300 Bob Thomas, with considerable input from 3572 Frank Norman and Lena Belliveau, Curator of the RMC Museum

2021 marks the 100th anniversary of the Mount Everest Reconnaissance Expedition, sponsored by the Royal Geographic Society, and led by Colonel Charles Howard-Bury. In an effort spanning five months, his small team explored the approaches to the summit in anticipation of a successful climb to be led by George Mallory. Fundamental to this exploration was the survey conducted by Major Edward Oliver Wheeler, seconded from the Survey of India and the only Canadian on the expedition. Throughout, he was patronized by Mallory, in keeping with his attitude towards Canadians, as “a boring colonial” lacking the social connections and the background of the right schools, overlooking his high technical competence, surveying experience and his proven ability as a mountaineer.

The expedition started in Darjeeling, Northern India on 13 May, 1921, proceeding to Tibet. Five weeks later, Wheeler began his surveys, working from a base camp at an altitude of 16,500 feet. He used a photo-topographic method perfected by his father which required the use of heavy cameras and glass plate negatives. For three out of five and a half months he worked alone with three porters, camping between 18,000 and 22,000 feet for 41 days. The culmination of this work was the preparation of a preliminary sketch map in mid-August that laid out the route to the North Col that would be used by all pre-WW II expeditions. 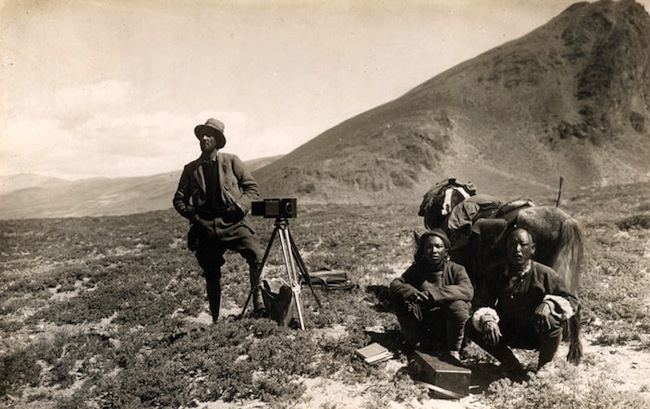 Wheeler with camera and Sherpas

This map was originally disparaged by Mallory but was recognized for its accuracy by the time of the expedition’s last climb. The expedition ended on 26 September following a climb three days earlier where Mallory, Wheeler and Bullock climbed past 23,000 feet. The worsening weather precluded further efforts and the members dispersed. Wheeler returned to his duties with the Survey of India. Ultimately, Wheeler had surveyed 12,000 square miles, revised earlier surveys covering 4,000 square miles and provided a detailed map of the immediate vicinity of Everest. Mallory led attempts at the summit in 1922 and 1924, dying just below the summit on the second attempt. His body was discovered in May, 1999.

In recent years there have been a variety of books on Mallory and Everest and regular coverage of the climbs to the summit inspired by the successful climb by Edmund Hillary and Tenzig Norgay in 1953. Only recently has Wheeler’s important contribution been recognized.

Who was Wheeler, what of his life apart from his exploits as part of the Everest expedition and why should we care? His life really was an outstanding record of courage, professionalism and service.

Oliver Wheeler was born in Ottawa on 18 April, 1890, the son of Arthur Wheeler, one of the founders and first President of the Alpine Club of Canada in 1906 and a renowned pioneer in the use of photo-topographic alpine survey techniques. He accompanied his father on surveys and climbs in the Rockies before he was ten and worked with his father every summer on the Dominion Land Survey. After graduating from Trinity College School in 1907 as Head Boy, winning the Chancellor’s Prize and Governor-General’s Silver Medal, he entered RMC with the highest marks in the entrance examination.

Wheeler excelled at RMC. He stood first in his class academically each of his three years while excelling in tennis, football, hockey, riding and gymnastics. Each summer he returned to the West, working as guide at the Alpine Club of Canada Annual General Mountaineering Camp. When he was leading a group in 1908, he first encountered tragedy as an experienced young woman climber fell to her death. He was not blamed but took responsibility for the accident and his companions took great trust in him to return to complete the climb.

Wheeler was appointed BSM in his senior year and graduated from RMC in 1910, earning twelve of thirteen academic prizes, including the Governor-General’s Gold Medal, and was awarded the Sword of Honour. Following graduation, he returned briefly to the West and met, and was inspired by, Tom Langstaff, a world-famous mountaineer who had achieved the highest recorded climb. Wheeler was commissioned in the Royal Engineers on 23 June, 1910 and was posted to the School of Engineering at Chatham for two years of training where he won the Haines Memorial Medal. (Click on photos for better viewing.)

Following completion of his training, Wheeler returned to Canada, leading the first ascent of Mount Elkhorn on Vancouver Island. He then continued on to India to join 1st King George’s Own Bengal Sappers and Miners, with which he went to France in 1914 as part of the 7th Indian (Meerut) Division. For over a year he was involved in a sequence of major battles in which his Division suffered horrific casualties. As an Engineer, he led raids to destroy enemy trenches, often engaging in brutal hand-to-hand combat. Wheeler was awarded the French Legion of Honour in the rank of Chevalier and was mentioned in dispatches three times in France. A measure of the impact on the two Indian Divisions was the more than 34,000 casualties, including over 1,500 officers, out of a total strength of 48,000.

In late 1915 the Division was withdrawn and transferred to Mesopotamia (now Iraq). There, Wheeler was involved in the actions following the surrender of the 6th Indian Division of 13,000 at Kut-Al Amarah, South-East of Baghdad, on 29 April, 1916. Wheeler was promoted to Captain in June. Stricken with typhoid fever, he was evacuated to India and returned to assume command of 8 Company in December, 1917. He was promoted to Major in January, 1919 and conducted a detailed reconnaissance of a wide area North-East of Baghdad in the new country of Iraq. He returned to the General Staff in India, then was seconded to the Survey of India, founded in 1767 to consolidate the territorial holdings of the British East India Company. In recognition of his actions, he was awarded the Military Cross and was mentioned in dispatches a further four times.

Following the War, Wheeler took leave in Canada during which time he climbed Mount Assiniboine. On his return to India, he visited briefly in England and, through Tom Longstaff’s sister, met Dorothea Danielsen. He proposed to her after five days, then left to rejoin the Survey of India. She followed him and they were married on 15 March, 1921in Bombay (now Mumbai). Two months later, he was on his way to Tibet. (Click on photos for better viewing.)

He suffered from a series of health problems on the Everest expedition, probably linked to his time in Iraq, and in 1922 returned to Canada on sick leave. During this time, he visited RMC in early 1923 to give a talk on his experiences on Everest. He returned to the Survey of India and, in January, 1924 was appointed Deputy Superintendent. He went to London for surgery in 1925, then recuperated in Canada. Back in India, he was promoted to Superintendent of the Survey in 1927. In 1933 he was promoted to Lieutenant-Colonel. He advanced rapidly in the Survey of India, promoted to Colonel in 1938 and appointed Director of the Geodetic Branch in 1939. He became the Surveyor-General of India with a promotion to Brigadier in 1941 and led a team that published an average of 20 million maps a year during the War. He was knighted in 1943 in recognition for his great service. He retired from the Survey in 1947 and returned to Western Canada where he wrote an account of the role of the Survey of India in WW II. He was the President of the Alpine Club of Canada from 1950-4 and was made an honourary member of the Club in 1956.He died in Vernon, BC in March, 1962.

He exemplified all of the values to which every cadet should aspire.

Sources and for more information on Wheeler, see:

Davis, Wade, Into the Silence – The Great War, Mallory and the Conquest of Everest, Toronto. Alfred A. Knopf, 2011.