Five Squadron, including N Flight, was housed in the bowels of Fort Champlain and shared a common Orderly Room (OR) with 6 and 7 Sqns, so there was the occasional overlap between the manly-men in Purple and the mouth-breathers in Yellow or Grey. The N-flight rooks had been cautioned against venturing upstairs into the “forbidden zone”, so even when we heard moaning and wailing from the upper floors of Champlain, we were told to ignore it. 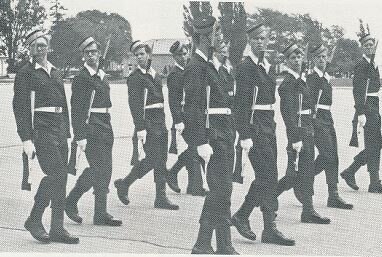 On a stifling afternoon towards the end of Rook camp, John Mackley was in the Orderly Room, hiding from the N-Flight 4th years. He was once again losing his solitary game of “I Spy” – he always answered “gashcan” when the clue was (as always) “I spy with my little eye something that is circular, has a gold band, a chinstrap, a nipple in the middle of the top, and is often but not exclusively worn by monkeys.” Al Lounsbury was fine-tuning his Zunting in the corridor near the OR, and the rest of us were wasting time polishing our boots. Suddenly, there was a loud clamour from the court-yard entrance, and soon some of the seniors from 6 Sqn came into the OR (to be fair, when you’re a Rook, everyone at the College, including the cleaning staff, the “Serving Ladies”, and even the Commandant’s dog are your senior). They said they needed a work party of weak minds and strong backs to bring several coolers of ice-cold beer upstairs to their lounge. We were shocked, both because we’d been told that upstairs was mostly holding pens for overflow from Collins Bay Penitentiary (and what did they need a lounge for?), and because the 6-Sqn 4th years didn’t seem to notice the purple sweatshirts with “#5 Brock Squadron” emblazoned on the fronts that we were all wearing.

A few of the N-Flight rooks grabbed the heavy coolers and carried them upstairs, following the 6-Sqn 4th Years. John realized that the coolers would be lighter and easier to lift if some of the contents were removed, so he began placing bottles on the stairs as he ascended.  The rest of us thought this was a swell idea, so we too began to offload some of the cargo.  Not wanting to clutter up the stairs, a second group started passing bottles back downstairs. Once the slightly-lighter coolers were delivered and we were dismissed, we went back to the OR and tried to figure out what to do with a couple dozen bottles of really cold beer on a really hot day. Al and I figured we could consume most of the evidence, but the other 10 guys might need to help with the last couple. This wasn’t a particularly popular solution and was out voted 10-2.  Dave Pullan suggested we deep-six the bottles in 18 feet of Kingston Harbour water; Al countered with deep-sixing Dave Pullan in 18 feet of Kingston Harbour water. These suggestions were rejected by votes of 11-1, and 5-4 (with 3 abstentions) respectively. Mike Diebel suggested we crack open some of the bottles and think about it, which passed 12-0.

Naturally we were caught. I’m not sure if it was the delivery of several pizzas, the guzzling noises, or the first sounds of joy and contentment from the lower floor of Champlain in the month since our incarceration, but something alerted our rook flight CSCs and CFL and we were ordered to our rooms to await further action. Sans beer.

A few hours later, after dark, we were ordered to get into uniform and prepare for inspection. After inspection, we were marched over to the back entrance to the New Gym in Yeo Hall. We were again inspected and then marched inside. It was a dark and stormy night. Thunder rumbled. We could hear the wind howling, although it might have been wolves. The gym was pitch black except for the flickering flame from a lone candle in the middle of a long table set up along the wall at the end of the gym. We were halted and left-turned so we were facing the table.  There was the faint pitter-patter of mice from the upstairs mezzanine. 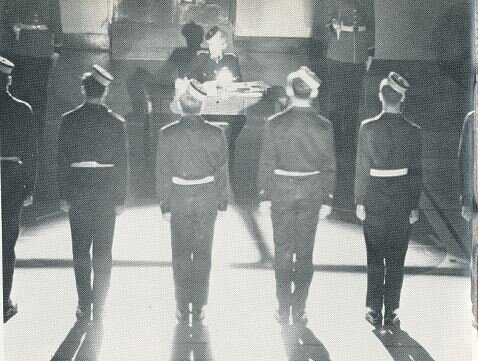 The CSL (Dan Murphy) was seated behind the table. He was wearing his Scarlets, and had a copy of CADWINS, CFAOs, a stack of already filled-in (and signed) charge sheets, and a bible in front of him.  His sword was placed lengthways on the table. There was a faint sheen of blood on the pointy-end, presumably from the last group of rooks who’d irritated him. He stared at us, man to boys.  We had committed a heinous crime and brought great shame to the reputation of the Squadron. There would consequences. We were 17 or 18 years old, and terrified that we were about to get kicked out of RMC, and probably the military! We’d end up being branded, and working in the Kingston salt mines, except for John Mackley who was likely going to be banished back to the forgotten lands out west.

The sword was pivoted to point towards us. “You are sentenced to death! About face.”

We turned. Bright spotlights came on, and we were nearly blinded. The rest of the Squadron was there, pointing their rifles at us. They fired! When the smoke cleared, we saw the BFAs on the rifles… (shooting blanks).

The lights came on in the gym. The Wing had gathered on the mezzanine to witness the “execution”. They all seemed to think it was hilarious. Us, not so much.