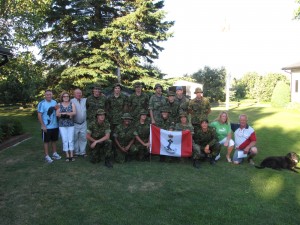 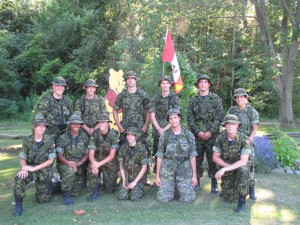 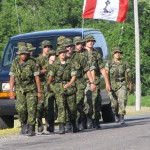 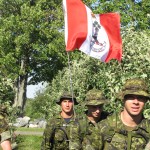 575 Ks of Pounding the Pavement Over the Past Two Months, Prepares Cadets for Nijmegen March

It has been a long and arduous summer for the 2011 OP NIJMEGEN Team from the Royal Military College. Their training has consisted of marches around Kingston of such considerable distance that they have marched over 575 kilometres. This has been a sizeable feat for our own officer cadets in the short time of two months. However, they have not just been around Kingston.

A mere four weeks into their training, the team took the local ferry to Wolfe Island for a different landscape in marching. This was a difficult and trying day for the group as temperatures were reaching highs of thirty to thirty-five degrees. With the dusty and deserted landscape of the back roads, the team had only themselves to push through that day’s distance of thirty kilometres. After having successfully overcome such a demanding day, the team looks back at Wolfe Island as merely another milestone before the Four Days March in the Netherlands.

Recently our team marched to Gananoque, our neighbouring town, for a camping trip. The trip gave the team a chance to take in the nature and beauty of Gananoque, as well as bond together before their journey to the Netherlands. At one point when the team had stopped to take a team photo of their successful march to Gananoque, they were also approached by a reporter from the St. Lawrence EMC News, Lorraine Payette. Her article can be found online at the St. Lawrence EMC website.

This last week before heading over to the Netherlands has been a busy but wonderful week.

On Tuesday July 12th the team was invited to the home of the late Michelle Mendes, daughter of Ron and Diane Knight, for a potluck barbeque (see photos). In 2009, the Michelle Mendes Memorial Fund was established to support the RMC Nijmegen team in honour of her deep ties to the Royal Military College and in honour of her passing earlier that year. The fund is supported by the RMC Club Foundation, who was represented at the barbeque by Mr. Rod McDonald, vice-president of the Foundation. The support that has been provided to the team has been outstanding, with funds allowing the team to make purchases from the swat boots on their feet, to the Gatorade and granola bars in their packs. A special thank you goes to the parents of Michelle Mendes, Ron and Diane Knight, her husband Vic Mendes, and Rod McDonald for all their support of the RMC 2011 Nijmegen team.

Our team headed to Ottawa on Wednesday July 14th for a ceremony honouring the friendship between the people of Nijmegen and the soldiers of the Canadian Forces. This friendship had been established during the later years of the Second World War where Canadian soldiers were responsible in liberating Nijmegen from the clutches of the Nazi threat. Wishes of good luck were said by several dignitaries, one of which was the Ambassador of the Kingdom of the Netherlands. These words we hold dear as we look forward to the challenge ahead.

As a final note, as you read this article, the 2011 RMC Nijmegen team has already been selected by our team leaders, 23130 Lt(N) Nicholas Buxton and 25182 NCdt Shane Beaudry.

The proud 11 members departed Friday July 15th with the new Commandant, Brigadier-General Tremblay, sending them off with strong words of encouragement. Thanks to all who have supported the team and those who have shared their experiences of Nijmegen with the team. We look forward to the experience of the turbulent and trying International Four Days March of Nijmegen.

The CISM Swim Team has arrived in Rio and is ready to participate in the 5th Military World Games. The road to the games has been filled with considerable training and two national competitions, ensuring that only the best athletes are chosen to represent the CF. Among the five women and seven men competing this year, there are six ex-Cadets. On the women`s side, there is 2Lt Serena Palmer (24990, ’11) as women`s team captain and Capt Stephanie Bigelow (23983, ’08) as one of the athletes. Competing for the men, Maj Garth Sindrey (21532, ’99) as the men`s team captain and Capt Dugald Thomson (22888, ’04), Capt Alex Bronson (23422, ’06), OCdt Nicolas Lightbody (26209, ’14) as athletes. As the team gets settled into the Blue Athletes Village here on the outskirts of Rio de Janeiro, the athletes are preparing for the start of competition. Daily trips to the outdoor Olympic size pool allow for pre-competition training and mental preparation. Our team will compete against 17 other nations from the 17th to the 20th of July inclusively. The competition will be fierce with many nations fielding their military teams with their Olympic athletes, but it truly makes for exciting events and an extraordinary experience for all.

So to date, the food is great, the accommodation is comfortable and everyone is eagerly awaiting the opening ceremonies for the start of competition!

For more info please check out these sites:

– On this site, under the 2011 Military World Games section, click on the Connect with Us page. 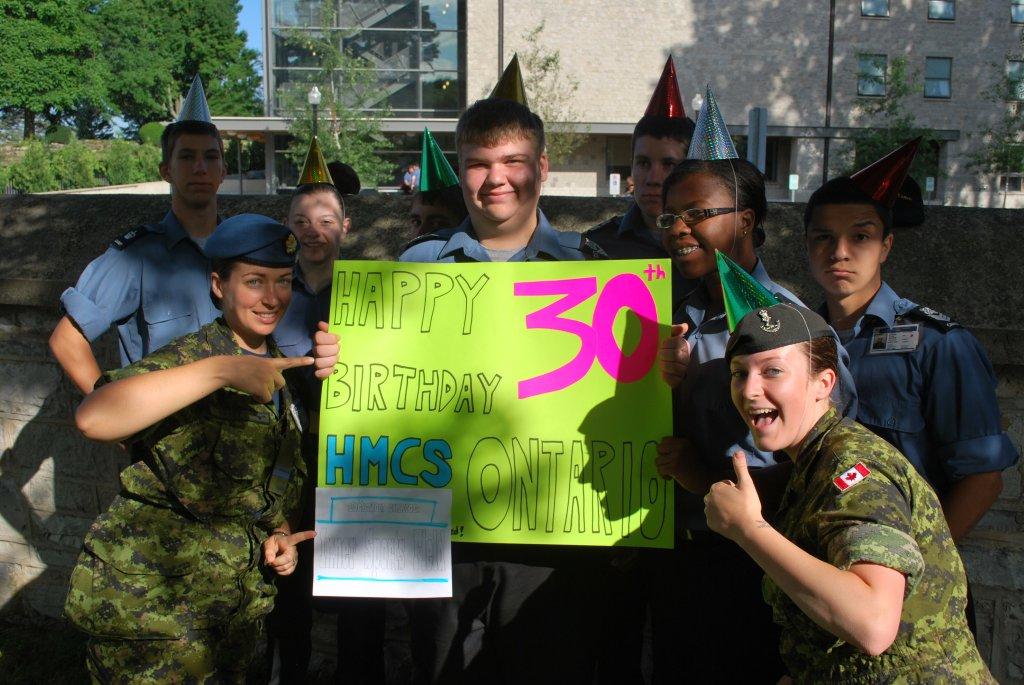 “More Power!” roars NCdt Wright as he speeds around the Fort Fredrick point at RMC in a SR2 zodiac. While some RMC cadets complete training across the country, a lucky group have been given the opportunity to work with HMCS ONTARIO, the naval cadet camp that takes place at RMC every summer. RMC cadets are employed in many different facets of the camp, from administration and logistics, to teaching the cadets the basics of navy life, including boating, ceremonial drill and music. I, myself, was selected to be a part of the Seamanship Department, a department which consists of approximately 100 cadets, ages 13 to 17, and 11 staff members. The goal of this department is to introduce and perfect the skills of cadets in every aspect of boating, including sailing, pulling (rowing) and power, as well as land skills that are necessary to being able to successfully operate a vessel, such as knot tying and navigation. NCdt Reid soaks up some sun while learning to sail a 27 foot service whaler.

Before the arrival of the cadets, NCdt (IV) Reid, OCdt (IV) Hoyt, NCdt (IV) Wright and I were required to participate in a one week course in order to teach us everything we needed to know about operating a number of different vessels, from the 27 foot service whaler to the “Black Dragon” zodiac, as well as equip us with the skills to pass this knowledge onto the cadets. Due to the fact that none of us had ever operated small vessels before, all four of us had a blast! 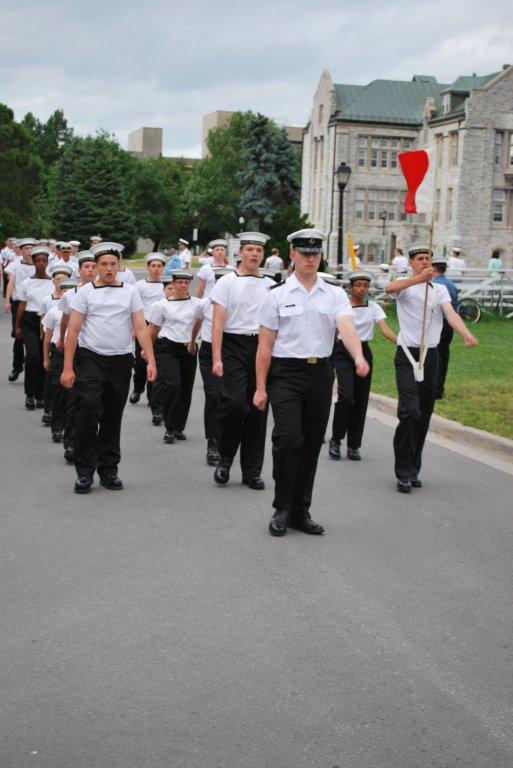 From there, we four RMC cadets began work in the different aspects of our individual jobs for the summer. OCdt Hoyt and NCdt Wright were selected as Small Craft Operator (SCOP) instructors, and are responsible to teach the cadets all their necessary boating skills, as well as test the cadets for their boating qualifications. NCdt Reid began work as a divisional officer for the Seamanship Department, and is now in direct command of approximately 20 cadets. NCdt Reid not only aids in instructing the cadets on the boats, he also responsible for the development of the cadets other necessary naval skills and deals with the cadets on a personal level, assessing any problems within his division and discovering a viable solution.

I was selected to be the administrations officer for the Seamanship Department. Although I am not on the water every day, I still find this job very rewarding. As the administrations officer, I am responsible for providing the department with logistical support, acting as the liaison between the department and the rest of the camp, as well as being charge of the personal information of each cadet within our department. I also get ample opportunity to directly deal with the cadets on a daily basis, as well as to drive and operate the departmental vessels.

I have found working with the cadets to be a very rewarding experience; the cadets arrive at camp nervous and timid, and by the end of their course, they are the coxswain of their own vessel, leading their fellow cadets with confidence. I have also found that my time with HMCS ONTARIO has provided me with a different set of leadership skills than I normally use during the school year at RMC. At RMC, each RMC cadet is provided with the opportunity to lead their peers, each of whom is competent, smart and capable leader themselves. However, at HMCS ONTARIO, RMC cadets must lead young teenagers who are just learning what it is to be a leader. Working directly with these young cadets has taught me to be patient, understanding and comprehensible, skills which I think will greatly aid me throughout my time at RMC as well as my career as an officer in the CF.  (Phot left) – NCdt Reece marches a division of cadets back to barracks after a parade. 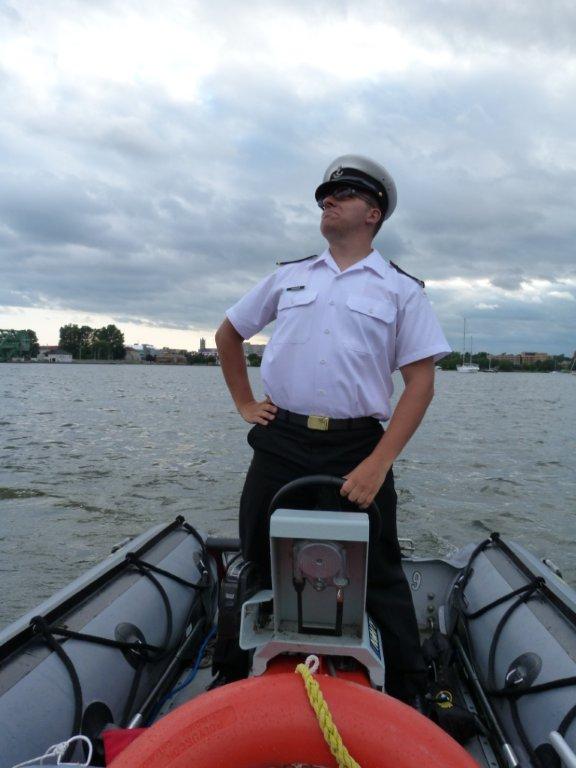 NCdt Wright having too much fun on an SR2 zodiac