Does the CF lack opportunities for higher education? One PG student doesn’t think so 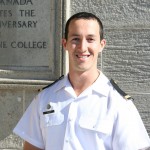 I was recently asked if I was interested in writing for e-Veritas once again, and I began to strongly consider the idea. But when I came across a very interesting article in the Globe and Mail Wednesday evening, I just couldn’t resist.

In his short piece entitled “Chinese-Canadians reluctant to join military, study finds,” author Stephen Chase illustrates that although four percent of Canadians identify themselves as Chinese, only 0.4 percent of members of the Regular Force in the CF identify themselves as such. Further, he claims that a recent report by Ipsos Ried Public Affairs suggests that this trend is unlikely to change any time soon.

For many, this finding may not be so surprising, since minorities in general are underrepresented in the CF compared to the population at large. What really caught my attention, however, was the insistence that Chinese-Canadians feel that the CF offers a lack of opportunities for obtaining post-secondary education.

Of all the reasons that could have been given for someone not to want to join the CF! Trust me, there are plenty out there (just walk over to Queens University campus and ask a student or two). On no fewer than four occasions he reports that the military is either not associated with higher education or high-paying career prospects. On top of that, at no point does Chase mention that those citizens included in the study may have been misinformed.

As a fairly recent graduate of RMC’s undergraduate program (Mathematics – Class of 2010), and as a current graduate student (Master’s of Business Administration – Class of 2012), I was bitterly disappointed with this portrayal of my organization. The CF is thriving with opportunities for its members to receive higher education, and RMC is the perfect example of why this is true.

In addition to over 1000 officer cadets completing undergraduate studies in any given year, we have countless graduate students from nearly all trades in the officer corps, as well as several senior non-commissioned officers. Further to these on-site masters and doctoral programs, RMC’s Division of Continuing Studies offers many courses that can be taken by CF members who are stationed anywhere in the world. Of course, there are also members of our military studying on campuses all across the country, and several more attending prestigious universities in the United States and overseas.

CF members receive a great deal of support for these endeavours too: There are opportunities to receive sponsorship from one’s unit, to receive scholarships from agencies such as Defence Research and Development Canada, as well as to receive funding via an Individual Learning Plan. In fact, there has been a growing emphasis for much of the past decade on CF leaders receiving graduate degrees prior to being considered for certain positions. This trend is expected to continue as a result of similar requirements for senior leaders within other major organizations in the Western world.

Chase never alludes to any of this in his article. When I first observed that more than 200 comments had been posted on the website less than three hours following publication (there were well over 800 the next day), I figured that many other Canadians had shared my view and had written in protest. But it was not so. Many Canadians seem to agree that the CF lacks these opportunities, and that our leaders have neither the education nor the ability to solve real-world problems. Clearly, the lack of understanding of the opportunities, as well as the capabilities, within the CF is not just a Chinese-Canadian problem, it’s a Canadian problem. And regardless of who is at fault for this state of affairs, it will be the CF that continues to suffer for years to come.