The staff of RMC and the RMCC Foundation organized a very successful, and enjoyable Captain 6513 John Bart  (RMC 1965) Awards Dinner at the Officer Cadet Mess on Thursday, October 29th 2009. This event is held each year to acknowledge the outstanding accomplishments of the winning team / squadron of the annual Obstacle Course, as well as the leadership excellence displayed by one member of each team / squadron.

This year’s winner was Papa Flight / 5 Squadron. They were given the honour of presenting a cheque in the amount of $10,000 to the Commandant’s Discretionary Fund. Given that we are all facing financial challenges at this time you could easily detect that Commodore Truelove was happy to receive the cheque. Each member of Papa Flight also received a plaque in recognition of their incredible achievements.

A formal Mess Dinner was held to celebrate the outstanding accomplishments of these OCdts, but the evening represented more of a relaxed, and enjoyable feel. Every OCdt in attendance had an opportunity to meet Captain 6513 John Bart (RMC 1965) and his charming wife Mary, who sponsor the Endowments that make this evening possible. Capt Heléne Pettis made it clear in her opening remarks that we were there to enjoy ourselves, and that we did. It was clear from the many notes being passed around throughout the Dinner that no one was particularly shy. You see there really is a useful purpose for those small table name cards. One example of those notes was from a lady OCdt challenging a member of the Top 4 to an arm wrestle. Another example of the note passing during the dinner was when DCdts Tony O’Keeffe received a “dance off” challenge at the end of the evening. The DCdts seemed quite surprised that someone actually thought they could beat him.

24963 OCdt Jamie Hill played the pipes throughout the entire evening, piping in the head table, piping in the Port, playing the Lament, and by providing superb entertainment during the main and dessert courses of the meal. He accomplished all of this and still managed to eat everything on his plate. His mom would be very proud. 24862 OCdt Brendan Alexander pianist for the evening managed the same feat by providing an enjoyable assortment of background music covering a wide selection of songs from the 60’s to present day. Their combined musical efforts culminated in a huge round of applause and a fairly substantial dram with John Bart. They surprised our guest of honour as they quickly downed their reward and looked for seconds. It didn’t take Mr. Bart but a moment to recall his days at the College as he tossed his drink back in very fine style indeed. Little did he realize that he still had to complete the exact same task (i.e. toss back another dram) three minutes later after acknowledging the superb efforts of Lesley Muirhead, MCpl Wylie, and their staffs in preparing what several OCdts said was perhaps the best dinner they have had in years. One OCdt even said it was the best she ever had. Our compliments to the Chef, and his staff on the presentation, and preparation of a wonderful meal.

Jennifer Jordan (the RMCC Foundation Office Manager) must also be commended for the great Dinner Program she developed as well as the PowerPoint Slide Show. These were well-received by all in attendance. 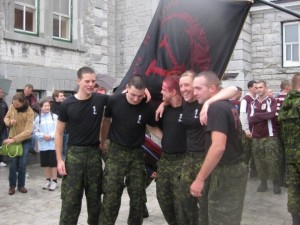 Some members of the winning team just shortly following the Obstacle Course. 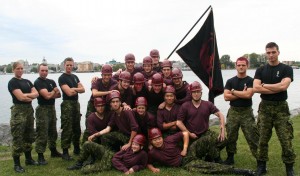 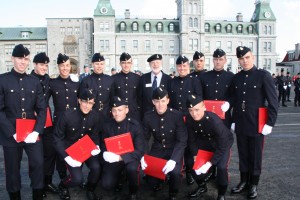 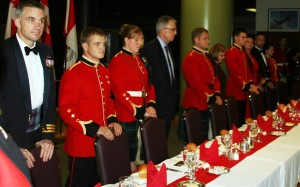