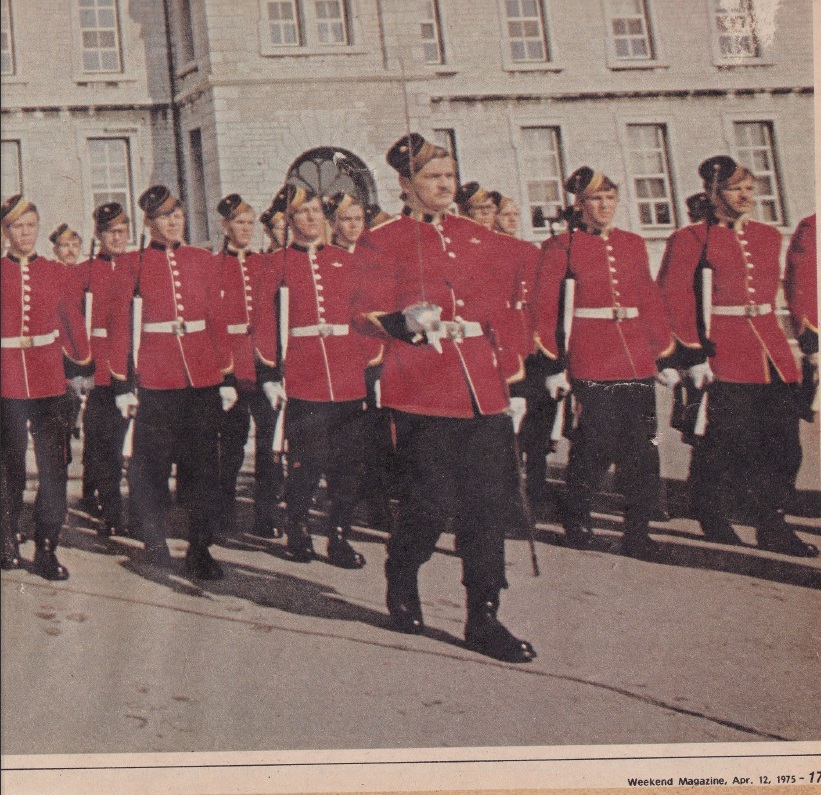 I read with interest Bill Trent’s article on RMC that was originally published in April 1975. I remember that article very well; as I was in high school when it was first published. I had been toying with the possibility of applying to military college for some time, and the article was one of the things that inspired my decision to go ahead and do it.

Interestingly enough, Bill Trent had a son who was a classmate of mine in high school, and I remember talking to him about his father’s impressions of the College. Apparently, in describing RMC and its standards in a private conversation with his son, the elder Trent at one point used the term “concentration camp” ! One can only wonder what he really thought of the place.

The article itself is a reasonably accurate description of the College in those days, or at least, a description that’s about as accurate as one might expect from an outsider who had obviously never been a cadet himself. One is left with the impression, in fact, that Bill Trent was a complete stranger to the military way of life, which would be a bit unusual for a man of his generation. But even so, the article does a passable job of providing a basic overview of the College, albeit it is noteworthy as much for what it does not say, as for anything that it does.

To me, the most troubling comment made in this article was the remark by the then-DCdts to the effect that, “it’s no wonder the weak-hearted leave early.” I suppose this comment could be forgiven to the extent that it may have been a reflection of some of the attitudes that were prevalent among the senior staff in that era. In reality, I don’t think that anyone who entered RMC and stayed for any length of time – especially in the environment that prevailed in those days – could legitimately be accused of being “weak hearted” or “unable to develop self-discipline”. Quite the contrary, especially when we think back to what recruits were subjected to at that time.

The simple fact of the matter was, it was inevitable that some recruits would come to the decision that, for a variety of reasons, military life just wasn’t for them. For those people, making the decision to leave was the right thing to do – and it was a decision that required courage, not one that was the product of weakness. Thinking back, I am sure all of us can remember colleagues who left early – some voluntarily, others not – and later went on to do very well in other vocations in life. Their accomplishments are just as much a credit to the College as are those of Ex-Cadets who did eventually go on to make the service their life’s calling.

If anything, I think one of the things that Trent’s article may illustrate is the magnitude of the huge gulf between the military and the rest of Canadian society that was present in the mid-1970’s. Due to a combination of massive social change, the legacy of the hugely unpopular Vietnam War, and the aftereffects of policies enacted by a government that was hell-bent on making unification look like it was actually working, by the time we were halfway through the “Me Decade” it seemed as though the Canadian Forces had largely disappeared from public view. Back in those days, most people in uniform had little more to do than sit around waiting for the Russians to try something; in the unlikely event that they actually had, the CF of that era wouldn’t have been able to do very much anyway. Little wonder that unlike many of their forebears, few gentlemen cadets of that era had any real expectation of ever actually being sent to war. I remember this was an attitude that was certainly prevalent at RMC when I was a cadet in 1976-77.

Still, Trent’s article is worth reading, if only because it provides a bit of nostalgia from the seemingly simpler and less complicated world of forty years ago. For what it’s worth, these are my thoughts, and I would certainly encourage others of that vintage to let the rest of us know what they have to say.