Paladins collect OUA East Coach of the Year, All-Star and All-Rookie honours after historic season
The RMC Paladins were amongst the honourees when the OUA named its All-Stars and major award winners on Wednesday afternoon, as head coach Steve Leknois (Lasalle, QC), outside hitter Michael Rowsell (Kingston, ON), and middle Adam Reid (Ottawa) collected conference accolades.

Leknois was named the OUA East Coach of the Year for 2021-22, marking the first time the award has gone to the RMC men’s volleyball program. Rowsell was named an OUA East 2nd Team All-Star, while Reid is a member of the divisional All-Rookie team.In addition to the individual recognition, the Paladins also made program history by winning the most regular season games – despite a shortened season due to the pandemic – and made the playoffs for the first time since joining the OUA in 2004-05.

2021-22 isn’t the first time Rowsell has registered on the radars of coaches around the league, as the Kingstonian was a member of the All-Rookie team back in 2019-20. But his stats on the court, while impressive again this season – registering in the top 15 of all point-getters in the league – weren’t the first thing his coach talked about.

“The biggest thing I recognized with Mike throughout the year is his growth as a person and as a leader,” Leknois said. “He started to show some very good leadership skills, to the point where, when Jonathan Barton wasn’t on the floor, he was usually the team captain.”

“On a physical level, what I really liked about him was at every single practice you see him challenging himself to try different things. During hitting warmup, he wouldn’t just hit the ball hard to impress people; he would work his shots, so his repertoire grew.”

While Reid earns his All-Rookie nod as a middle, coming into the season, it looked like he would play as an outside hitter. Then injuries created an opportunity for the first year to prove himself at an unexpected, albeit familiar, position.

“I wouldn’t say it was a challenge, because he played it in high school, but he knew we needed him there, and he just got better, and better, and better at it,” Leknois said. “Adam became one of the most dominant middles in the league, and we’re talking a guy who’s barely 6’1” and he’s beating guys who are 6’6”, plus.”

As an example of his prowess, Reid finished the season third in the OUA with 32 total blocks.

In addition to the student-athletes who won recognition, Leknois also earned honours for how he guided the team to this historic season. While the award will only have his name on it, Leknois made a point of acknowledging the work his assistant coaches, Darral Rafuse and Evan Cranshaw, and the student-athletes contributed this year’s overall success.

“It’s nice to be recognized by your peers, but I thank the team for what they did this year,” he said. “They bought into some of the ideas I had: I wanted to be a hard serving, aggressive serving team, knowing that we’re a little undersized in certain positions, and they didn’t doubt that.”

This year’s captain, Barton is one of the leaders on the team who helped reinforce the message from the locker room – and that’s something Leknois wanted to point out about one of the best captains he’s ever had.

“I put him on the Mount Rushmore of my captains,” Leknois said. “And he’s a really good setter, and a great blocker. Most coaches look to pair their setter away from the best hitters, and here I am, in most cases, trying to pair him up against the best hitter out there, because he’s such a good blocker.”

A graduating senior like Barton, Harrison Kennedy also earned his coach’s praise for the role he played as a leader, exemplified by his willingness to dive into a serving and defensive specialist role during his final year with the team.

Additionally, Leknois had to mention Reid’s fellow rookie Joshua Wilkinson, who put up strong numbers this year despite being sidelined due to injury for part of the season.

Ultimately, any awards or recognition that come his way are second in Leknois’ eyes to seeing the team succeed.

“If I didn’t get Coach of the Year, but we still made the playoffs, I’d be completely happy.”

Your donations to the Danny McLeod Athletics Fund supports both the RMC Men’s and Women’s Volleyball Teams. 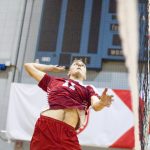 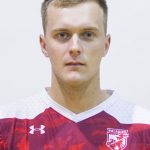 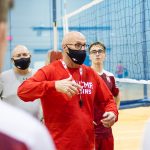