Morale Building Quotes from Sir Robert Borden (our Prime Minister 100 years ago at this time):

“As to our duty, we are all agreed: we stand shoulder to shoulder with Britain and all the other British dominions in this quarrel. And that duty we shall not fail to fulfill, as the honour of Canada demands.”

“We must not forget that days may come when our patience, our endurance, and our fortitude will be tried to the utmost. In those days, let us see to it that no heart grows faint, and that no courage be found wanting.” Nova Scotia-born, Borden entered the provincial parliament in 1896, took command of the federal Conservative party in 1901, and was Canadian Prime Minister, 1911-1920. 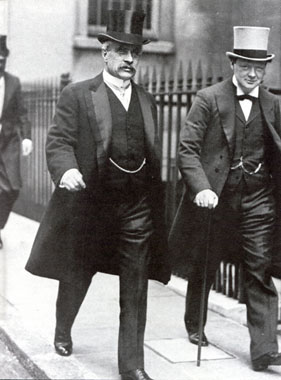 Borden, Sir Robert Laird, with a young Winston Churchill, then First Lord of the Admiralty (courtesy National Archives of Canada/C-2082).

Sir Robert Laird Borden, lawyer, politician, prime minister of Canada, 1911-20 (b at Grand Pré, NS 26 June 1854; d at Ottawa 10 June 1937). The eighth prime minister of Canada, Borden was a Halifax lawyer, leader of the Liberal-Conservative Party 1901-20, architect of the Conservative victory in the “Reciprocity Election” of 1911, PM during WWI and a leading figure in the achievement of “Dominion Status” and the transition from the British Empire to the British Commonwealth of Nations.

Borden was a self-made man. After a brief formal education, he spent 5 years teaching at private academies in Nova Scotia and New Jersey. Returning to NS in 1874 to article in law, he was admitted to the bar in 1878 and by 1890 headed a prestigious Halifax law firm. He was elected to Parliament in 1896 and in 1901 was selected by the Conservative caucus to succeed Sir Charles Tupper as leader of the Liberal-Conservative Party. Over the next decade he worked to rebuild the Conservative Party and establish a reform policy (the Halifax Platform of 1907).

In 1911 he led the opposition to the Reciprocity Agreement negotiated by Sir Wilfrid Laurier’s government with the US and forced a general election. By skilful political management Borden brought together a coalition of anti-Laurier groups (Liberal businessmen opposed to reciprocity, French Canadian Nationalistes opposed to the Naval Service Act, Conservative provincial administrations and his own parliamentary party) which defeated the Liberal Party.

Borden’s leadership during WWI was remarkable. At home, his wartime government was responsible for the Emergency War Measures Act (1914), the first measures of direct taxation by the Ottawa government (the Wartime Business Profits Tax, 1916, and the “temporary” Income Tax, 1917), the nationalization of the Canadian Northern Railway as the first step in the creation of the CNR and, after the collapse of the voluntary recruiting system, the Military Service Act, 1917. Conscription was accompanied by the creation of a Union Government of pro-conscriptionist Conservatives and Liberals which won the bitterly contested general election of 1917.

Overseas, the Canadian Expeditionary Force grew from one division to a full Canadian Corps commanded after 1917 by a Canadian, Lieutenant-General Sir Arthur William Currie. Borden believed that the distinguished record of the CEF at Ypres, Vimy Ridge and Passchendaele and in the final 100 days was the ultimate proof of the maturity of Canadian nationhood.

Principal author of Resolution IX of the Imperial War Conference of 1917, he argued that Canada and the other dominions deserved recognition “as autonomous nations of an Imperial Commonwealth.” As leader of the Canadian delegation at the Paris Peace Conference in 1919, he was primarily responsible for international recognition of the autonomous status of the Dominions.

Borden retired as PM in 1920. In his last years he was recognized as an international statesman and firm advocate of the League of Nations. He pursued a successful career in business and served as chancellor of Queen’s University 1924-30.