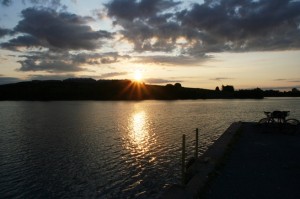 Looking back on my morning I couldn’t be happier that I had pushed myself out of bed at 0500 to drive to the campus. 0530, aka “zero dark thirty,” is one of those peaceful moments around the college; all is quiet, most people are asleep – except the Commandant, his staff, and about 350 first year recruits, who stand on the parade square preparing to go for a morning run.

I take pictures and listen as Commodore Truelove directs the group of new recruits to move in close. He speaks to them for a few minutes before PT, wishing the civilian university students the best of luck as they leave RMC this week, and explains the importance of keeping in shape as a member of the Canadian Forces. He reminds them that basic training is only 9.5 months away for some of them and that PT on basic will not be easy. The recruits stand quietly and listen, realizing this is a choice they have to make if they want to do their jobs. The commandant tells them that every trade requires fitness, and relates it to his story of flying with the snowbirds recently – which is a far shot from any ship! The recruits acknowledge and they fall back into ranks with a new outlook, for many of them, on their personal health and fitness. 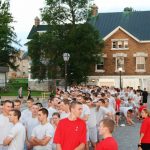 The ranks begin by walking and slowly change into jogging. They go around the campus, by the new Birchall Pavilion complex, and the soon to be Wall of Honor. They pass by the Commandant’s house and then continue back around the point. I parked, thinking the run was complete and that they will carry on with their day, but Commodore Truelove and his staff had a surprise in store. The recruits ran, by flights onto the pier, and eventually the entire pier was full of bodies in gray PT gear. 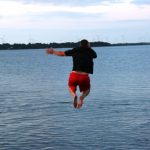 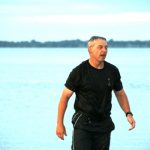 (From left): Major Erkelens cannon balls off the pier, Major Parent and MWO Skinner both show the Mil Wing can have fun too.

Jumping off the pier is something that you always wish for on those hot days around the college, but rarely get the chance to enjoy. The recruits, and even the staff were all smiles as they waited for their chance to get into the water. Apparently Major Erkelens could not wait as he cannon balled in before everyone to supervise the recruits in the water. As I take pictures, I also see the new Sergeant Major, MWO Skinner jump in with Major Parent. Its nice to see that even the staff are showing the recruits you can work hard, and still have fun sometimes. The group had the opportunity to watch the sunrise over top of Fort Henry together, and everyone was smiling, because the morning was a success, one that these recruits will not forget. 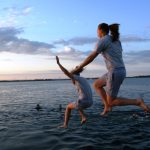 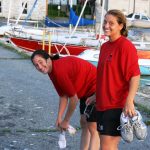 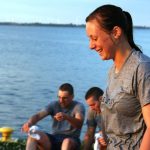 Leadership is the art of getting someone else to do something you want done because he wants to do it.  -Dwight Eisenhower