The recruits have been at RMC for a little over 1 week now. Their drill has improved, through countless drill classes. They are being introduced to physical fitness, and its importance to your careers in the CF. They all completed their first CF expres fitness evaluation this week, and many of the military wing staff came out to support the recruits and gauge the fitness level of our new recruits. 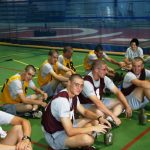 The recruits are getting introduced to the military lifestyle. They have all now experienced that first inspection, are seen marching in flights around the college, and even getting the opportunity to call drill for themselves.

In conversation with recruit OCdt Tucker Densmore (Kilo Flight, 9 Sqn) he seems very keen in telling me he wants to join the fencing team, flying club, and have honors in his academics. He also is aiming for a 450+ PPT score, and wants to beat the push up record (he did 74 for his CF express test, and is well on his way to reaching his goal). When I ask him what he is most looking forward to accomplishing at RMC and his answer is a common one among the recruits, the obstacle course. The recruits are a little under 6 weeks away from reunion weekend, it seems like an eternity now, but looking back, the time will fly by. 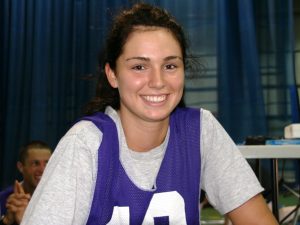 I also spoke with the Women’s Varsity Soccer Goalie OCdt Olivia Clarke (Kilo Flight, 10 Sqn) who was recently recruited. She is from Caledon East, although her mom lives in Kingston. She said she is looking most forward to FYOP and playing soccer this year, and wishes she had time to play two varsity sports because she also loves volleyball. She has set high standards for both her physical fitness and her academics, and I’m sure her coach Chad Beaulieu is as happy as the rest of us to have another excellent athlete on the RMC Women’s Soccer Team.

The recruits are now entering their second week at RMC and recruit camp is almost over. They have all learned so much in such a short period of time. This is all thanks to the excellent staff and instructors these recruits have been provided with. The majority of the recruits will be remaining at RMC for FYOP, while the remainer, civilian university students, will be leaving shortly to return to their respective universities across Canada.

Wishing the best of luck to the civilian university ROTP cadets with their academics and future training.  To the future RMC first years, work hard, train hard, and have fun! We’ll see you on the other side of the arch very soon.