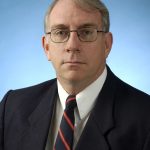 9139 Dr. Richard Frank Marsden (CMR RMC 1972) recently retired after 35 years of service with the Federal Government. Rick entered CMR in 1967 and graduated from RMC with a BSc in Honours Mathematics and Physics. At the college he was a member of the varsity soccer and high box display teams. Upon graduation he was posted to le cinquieme regiment d’artillerie legere du Canada where he served in Q Battery and Regimental and Combat Group Headquarters. He left the CF in 1976 to seek a PhD in Physics at the University of British Columbia which he completed in 1980. After a post-doctoral appointment at Dalhousie University he accepted a position as an assistant professor at Royal Roads where he taught in the undergraduate Physics and Oceanography Programme and the graduate programme in Acoustics and Oceanography. Upon the closure of RRMC, Rick joined the RMC Physics Department where he was instrumental in re-establishing the MSc in Acoustics and Oceanography. He was appointed Head of Department in 1998 and Dean of Science in 2003. He played a major role in transforming the Physics and Science programmes to conform to the newly adopted credit system. Rick was diagnosed with rectal cancer in 2007 and after a year of chemo, radiation and surgery, he is presently cancer free. The importance of fecal occult blood testing and colonoscopies cannot be overemphasized as survival is critically dependent on early detection. Rick and Barbara-Ann will settle in Kingston and plan to travel, particularly to the Caribbean, to escape as much of Eastern Canadian winters as possible. Summers will be spent at their cottage.