The College’s Cadet Wing lead 9/11 commemoration parade tradition continued last week, demonstrating their awareness and understanding of the profound impact 9/11 has had within the profession of arms. 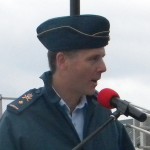 “It was especially moving to have addressed the Cadet Wing, taking pause to reflect on the losses of this tragic day.” 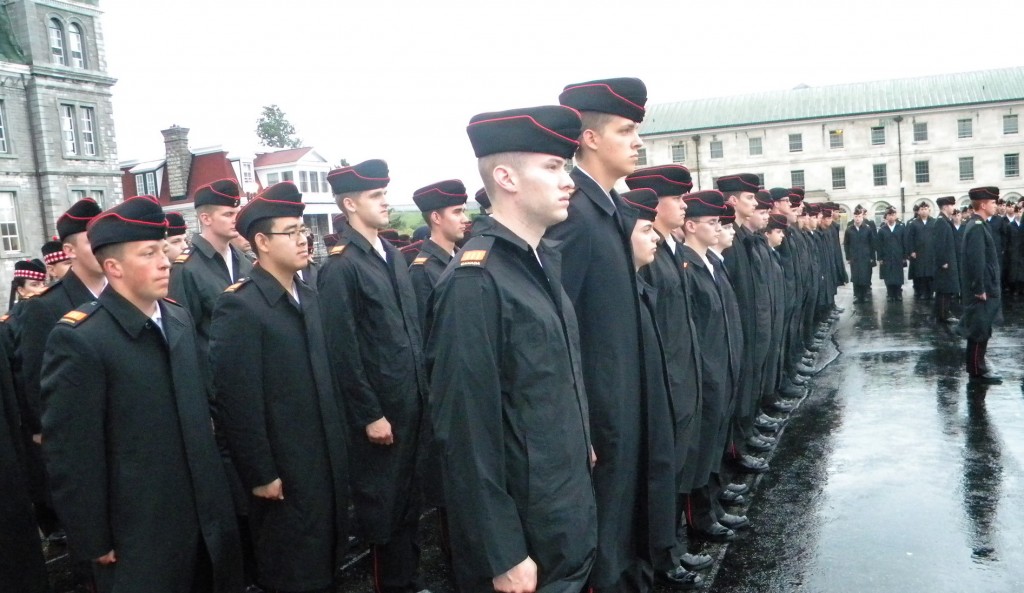 September 11th, 2001. Millions sat and watched the television, listened to the radio and called their loved ones. Everyone knew that the world was changing forever. This is how the people of the world, both young and old looked upon the 9/11 terrorist attacks. 13 years later, on September 11th, 2014, the officer cadets of the Royal Military College of Canada stood tall on parade in remembrance of the lives lost on that sobering day. 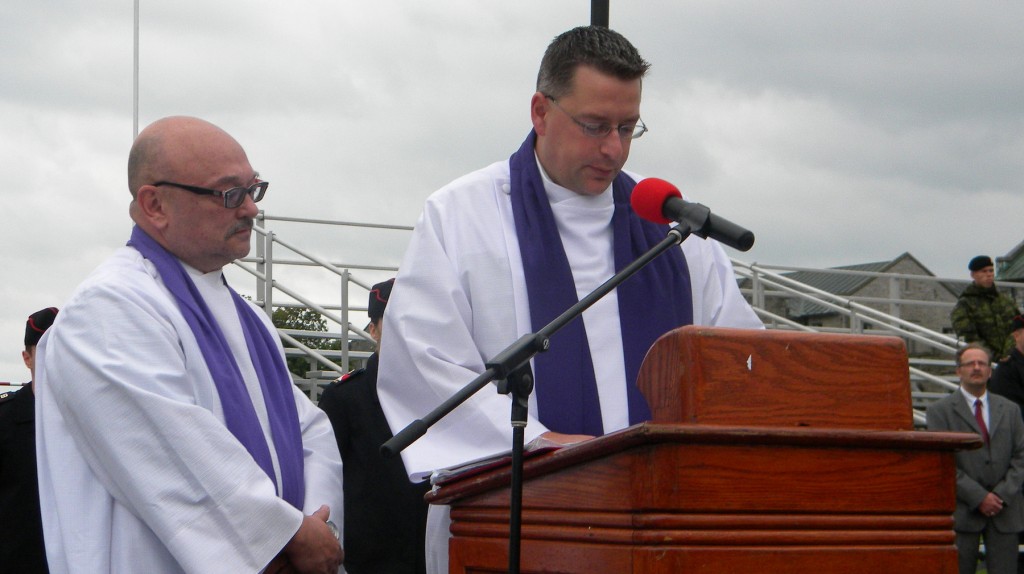 After the benediction by Chaplains Dennis Newhook and Jean-Paul Rochefort, the Commandant of RMCC, BGen Al Meinzinger addressed the parade to express solemn sentiments towards the lives lost during the 9/11 attacks. This was followed by the playing of the Last Post, a song played at of the end of a day of duty and a representation of the end of life, a minute of silence and Reveille, the rising call to awake and rise the next morning to continue the duty. The parade concluded with departure of the Commandant and the dismissal of the parade. 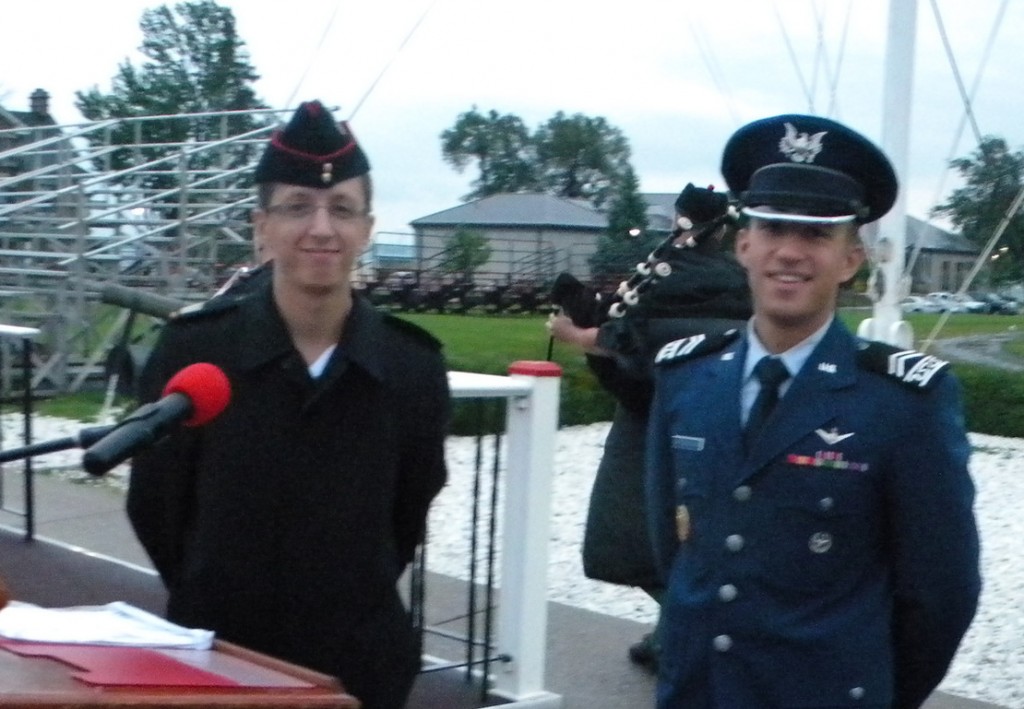 The Masters of Ceremonies for the parade were RMC student OCdt (IV) 26152 Marois and student of the United States Air Force Academy, OCdt (III) I2348 Adam Marcinkowski. Upon being asked how he felt attending and presiding over the parade as master of ceremonies, OCdt Marcinkowski said that “I am reassured and very proud to have this alliance. It seems like there is no difference between us. We are fighting for the same thing. We are on the same side”.

Also a student of the United States Air Force Academy, OCdt (IV) I2347 Ethan Glover said that “it was honestly really touching seeing how 9/11 affected other countries. We get kind of set in our own ways and we see how much it touches American and affects America, but being up here it is awesome to see how well recognized it is here in Canada and to see the Stars and Stripes right next to the Canadian national flag, it was really touching.”

***
“The band is a great environment, since not only is membership spread across all years and positions (which can be slightly terrifying to a young first-year cadet), it provides a great atmosphere for fun and music. And it’s the best place to be on parade!” 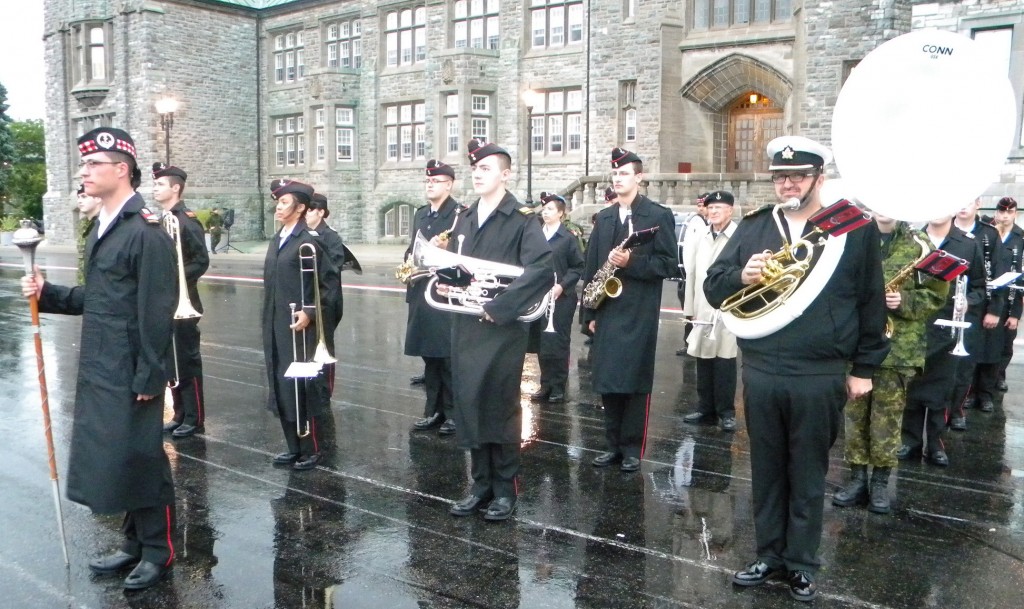 A Study in Music

Ceremonies of remembering are always marked by the twins of silence and music. Standing on the parade square, the skies a tumultuous slate grey and the wind snapping angrily at dozens and dozens of black overcoats, it was impossible not to feel heavy with the burden of memory. As the speeches finished, commemorating the day known as 9/11, a single trumpeter from the band stepped forward to perform Last Post.

The military has historically marked important moments with songs and harmonies played by the unit’s appointed band. From contemporary works during long inspection parades to solemn callbacks of the past, music on parade provides an opportunity for both distraction and reflection. The Royal Military College, in that aspect, is no different. OCdt (II) 27013 Cassandra Wuerth, 2 Squadron, remarks, “When the band plays, it feels like the music ties the College together, as though we are a big family… It feels like the whole Cadet Wing comes together.”

There are many parades that RMC engages in throughout the school year. The first major one, the Badging Parade, will see the first years welcomed into the Wing as fully qualified initiates of the College. One song that is typically played at these events is “Highland Laddie” or “Blackbear”, a regimental march that historically derives from the Royal Regiment of Scotland. “It is the song played at the end of the parade,” OCdt (II) 27124 Mary-Anne Iver, 4 Squadron, explains. “When the marchers can join in and cheer along. As a first year having that song played during the badging parade just made my heart leap. I wanted to skip every time I heard everyone in the college in unison chant ‘Oi’! And then, when it happened last year at graduation, it made me happy to see all the graduates cheer together with those big grins on their faces.”

Many of the band take immense pride in what they do. “The band is a great environment, since not only is membership spread across all years and positions (which can be slightly terrifying to a young first-year cadet), it provides a great atmosphere for fun and music. And it’s the best place to be on parade!” OCdt (II) 27087 Daniel McCall, 12 Squadron. (Many would argue the best place for parade, but we’ll let that slide).

Parades are opportunities for a military unit to demonstrate their professionalism and deportment, but nearly everyone will have some element of tradition locked inside it, some call to the past, to the need for men and women of this country to stand together. While sometimes it can be a pleasant affair, trying to keep the grin off one’s face as a superior walks by to the tune of Star Wars, at others it can be a deeply personal event – recalling the brothers and sisters at arms that have fallen even as we stand. As the music draws to a close and the final notes of Last Post are played, we are reminded from brass throats of our futures, and our pasts, and regard them in silence – until the next song begins to play.

Wednesday morning started off as it usually does. There was a parade followed by various military training for the four different academic years at RMC. Us third years were given a briefing in the New Gym about the military ethos and what it is to be in the Canadian Forces. Although this material is rather dry in nature, it is important to remind ourselves that we are here to be officers in the CF and that we are not simply here for academic purposes. The young officer giving the briefing did his best to make it as enthusiastic as possible and we all shared in a good laugh when some stories were told about how some of the values such as courage and integrity were applied in some members’ lives. Following this briefing was a very informational Div Comd’s hour in which he shed some light on some of the various changes that were recently made to the college. There was some time for questions at the end and everyone walked away from PMT knowing a bit more than they did waking up and feeling a bit better knowing why some of the changes were made to the college.

This weekend for fourth year PMT there was a Division hour, as well as a short presentation on the various senior positions in the Canadian Armed forces. During the Division hour, the CDLs and their respective Div Comds had a chance to present their thoughts on the senior leadership in the Cadet Wing. The second half, presented by the Standards Officer, was title ‘Know the Canadian Forces’. This revolved around all of the senior positions within the Canadian Military, explaining their responsibilities and where RMCC fit in. Although a short presentation, it is always important to know about the greater military as a whole; especially when graduation is rapidly approaching.