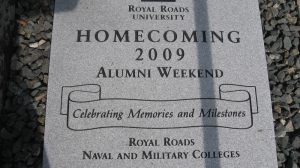 Next year’s Royal Roads Homecoming Alumni Weekend will be held in the second weekend of September (10th-12th). If your class is interested in attending, please contact RRU staff person Karen Inkster at Karen.Inkster@royalroads.ca. Murray Thom (RRMC 1954-56) presenting RRU president, Dr. Allan Cahoon with a copy of the Letter Patent of the Queen’s Colours from the 50th anniversary of RRMC in 1990. 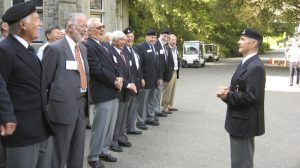 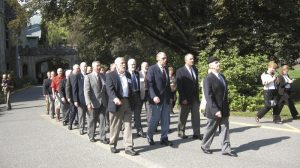 Our apologies are  extended to Class of 1957-59 – 50th Reunion of Graduation from Royal Roads as we experienced technical problems downloading your group photo.

Also, we had similar problems with Class of 1950-52 –Getting piped up from the Castle to the Quarterdeck
Bill Evans, Dave Wightman, John Mothersill, Nigel Brodeur.