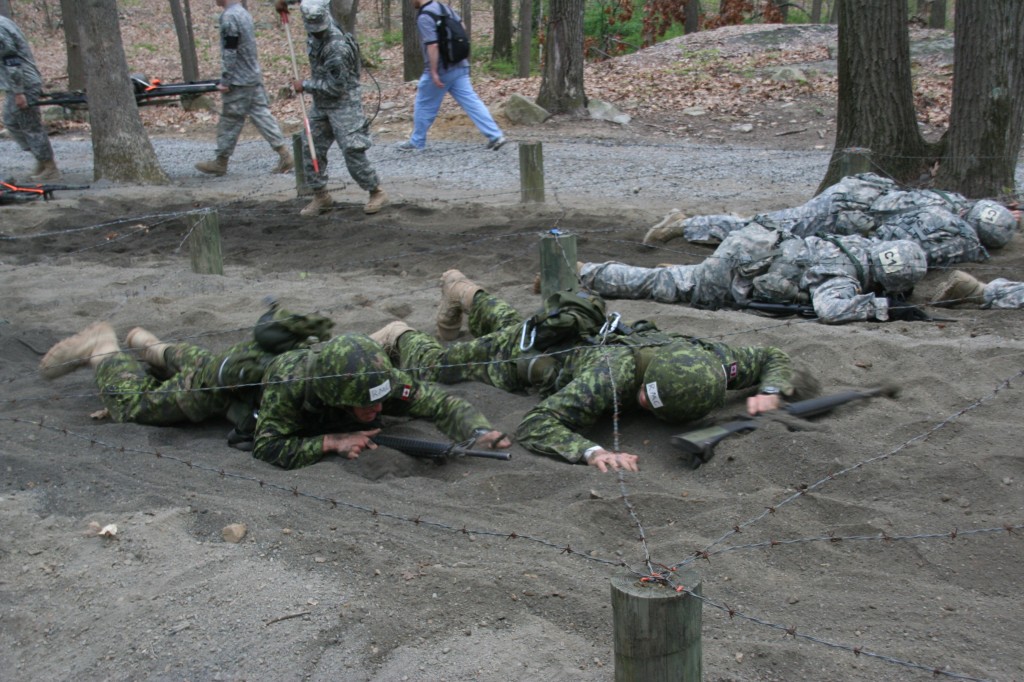 The results are in. With a total score of 417 points, RMC placed 3rd overall in last week’s 2012 Sandhurst Competition. This ends a week of speculation for many at the College. When the Top 5 overall teams were announced at the awards ceremony following the competition, RMC was announced 4th. The teams were supposedly announced in no particular order, but as the Australians took home top honours and they were announced first, many believed that RMC had finished in 4th place, behind the Australians and both British teams.

But the results tell the tale. RMC placed 3rd overall, behind the Royal Military Academy Sandhurst (Red) team, with 435 points, and the Australians, with 440. Congratulations once again to RMC’s 2012 Sandhurst Team on a hard fought finish!

The complete results of the 2012 Sandhurst Competition, as well as a detailed description of the Competition itself, can be found here, on the United States Military Academy’s website.

Capt Kevin Schamuhn, Sandhurst 2012 OIC, had this to say regarding the team’s performance and the months of training that lead up to it:

“The Royal Military College of Canada (RMC) is hereby recognized for their outstanding performance in the 2012 Sandhurst Military Skills Competition, which took place at the U.S. Military Academy (USMA) in West Point, N.Y. on April 20 and 21st. While at USMA, RMC competed against international counterparts in compass and map land navigation, marksmanship, rappelling, boat movement, grenade throwing, river crossing, and other challenging tasks. RMC placed 3rd overall and competed against 55 teams from around the world including the United States, China, the United Kingdom, Australia, Chile, Afghanistan, and Spain. A team from RMC has won the competition four times since 2005 (the last time was in 2009); RMCC defended its reputation with another strong showing this year.

The cadets involved in training and support put in months of extensive coordination and rigorous training on top of an already demanding schedule as Officer and Naval Cadets at RMC. Their dedication, fitness and teamwork epitomize the degree of excellence for which RMC stands, and its commitment to producing outstanding leaders for Canada and the Canadian Forces.

The Regular Force and civilian staff are also commended for their tremendous effort in the planning, coordination, and support of the Sandhurst program. Countless hours were spent producing the most effective, creative training possible and coaching the cadets on every possible scenario likely to be seen during competition. The efforts of the staff have paved the way for a solid, highly competitive Sandhurst program for years to come.” 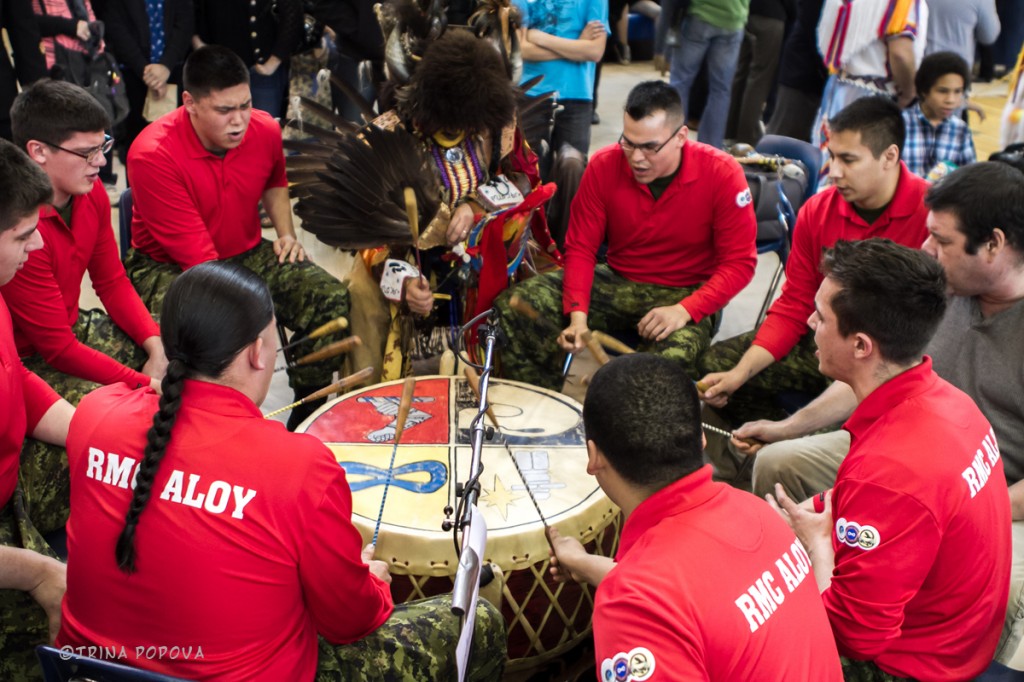 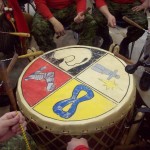 ALOY (the Aboriginal Leadership Opportunity Year) participated in the Georgian College Pow Wow in Barrie, Ontario on the 17th of March. Several of the ALOY cadets took part in the drumming and singing, including the Grand Entry. The events, organized by Georgian’s Pow Wow Student Steering Committee, gave students and our cadets alike the opportunity to honour and celebrate our culture. A traditional Pow Wow is a celebration of the great culture and traditions handed down through generation to generation. It was education and entertainment for us, as the ALOY cadets, and the general public as well. Venders were selling the traditional wood carvings and many tasty snacks were available for lunch as well. This year’s Pow Wow was held in memory of Merle Assance-Beedie, an Elder who offered guidance and support to many of the Georgian College’s students.

The Pow wow and sale of traditional regalia showcased the many talented dancers and singers but also allowed us as Aboriginal people to uphold the teachings of inclusiveness by sharing gifts with the college students, and community. The people at Georgian College also graciously showed us a tour of the college and the many subjects that they teach there. The people of Barrie, Ontario were also great hosts to us, and though our drumming wasn’t as good as some of the professionals at the Pow wow, we were happy to have participated with such welcoming hosts.

In all, ALOY was honoured to have been invited to the Pow wow, and were more than welcomed by the awesome staff and participants at Georgian College. Their efforts were felt and appreciated by all, and I feel safe to say we all learned a great deal from the people there. For the fourth straight year, RMC has participated in the Annual Cyber Defence Exercise (CDX) sponsored by the US National Security Agency (NSA). Running since 2001, this series of exercises tries to replicate the kinds of modern, sophisticated threats facing our computer systems and networks, and then give the teams the daunting task of trying to build networks that can stand up to those threats under active attack.

Competition in the exercise is fierce. The undergraduate teams from the US service Academies have the NSA Director’s Cup on the line. The graduate schools (including RMC) are going for bragging rights, looking to stonewall a team of elite penetration testers from the NSA and US Military.

For RMC, the competition is the capstone project for Dr. Scott Knight’s Computer Networks and Security project. The team has to design and build their network from scratch, including web servers, mail, file shares and user workstations. Then we had to harden the network, layering on security in depth and deciding where to put the virtual tripwires to detect attacks. Oh, and there’s a catch; some of the workstations belong to “coalition partners” and were given to us. By the NSA. So they were full of malware, rootkits and trojans just waiting to come alive and give the Red Cell a backdoor into our network.

The first day of the exercise started calm, but with a sense of urgency. It was the last day for putting the network together, making sure we could talk to higher HQ and each of the other schools, and that the scoring system was up and running. On day two, Red Cell came to play and things got hairy pretty quickly. From the outside, they probed our network perimeter, looking for vulnerable points they could breach. From the inside, the malware on the dirty workstations started to wake up and try to break out. Finally, there was the ringer – Grey Cell. One man sent from the HQ whose job was to play the role of the ignorant user who would click on any web link, open any e-mail attachment and fall for any online scam. Whenever we thought things were under control, Grey Cell made sure that we couldn’t predict what might happen next. But we had a game plan and it worked. We found malware on the workstations and cleaned them (we didn’t get everything, but I don’t think anyone could have). We reversed engineered the malware and learned how to stop it. We used advanced intrusion detection techniques to find covert channels and block them at the firewall, disrupting Red Cell’s command and control so that we could interdict their attacks.

The other schools brought their best to the fight as well. Overall, RMC finished third in the graduate category and fourth overall in a competition open to eight schools. And we learned in the hot wash that the NSA only penetrated our defences once from the outside, and we blocked that attack with our depth defences.

Computers and computer networks are everywhere and they can be a target for our adversaries. Cyber defence is a growing concern and we need to get better at it. The kind of education provided by Dr. Knight’s course and the kind of training provided by the NSA in the CDX series are a great set of first steps in building the technical expertise the CF needs to meet these challenges.