On Wednesday, November 4th, the Men’s Varsity Rugby lost a hard fought battle against McMaster University during the first round of the playoffs. The Paladins spend the majority of the game on the defensive, pushing McMaster back just in front of the try line and on the 22 line of the field.

The Paladins were able to push into McMaster’s half of the field, resulting in a few bruises and cuts as the game moved into the final five minutes, with a score of 20 McMaster 15 RMCC.

With victory on the horizon, the Paladin fought on the edge of McMaster’s try line and lost the ball, resulting in a kick that would win McMaster 3 more points – 23 McMaster 15 RMCC.

The Paladins continued to fight an unwinnable game during the final minute, displaying the quality of determination the College attempts to instill in its Cadets.

Cadets and families would now go to the reception being put on by McMaster and comported themselves as professionals immediately after the two teams had battled to stay in the playoffs.

Rugby 15s season is over, but the Paladins will move into 7s season and bring the same determination to the field that took them to the playoffs during the regular season.

Some notable points about the Fall 2015 Men’s Varsity Rugby Team is that we were joined by United States Airforce Academy Cadet Chase Bockstruck and RMCC master’s degree student Major Tyler Gill, both of who made a significant difference in our season.

The team lost a lot of talent after the graduation of the Class of 2015, and it was clear that a lot of work would be needed to be even close to performance made in previous years. Instead, the team took on many new talented rugby players and took the team further than it has been in many years.

The Varsity Rugby Team continues to use the original cheer, “Red Men, Right Arm”, despite having become the Paladins in 1997 and hopes to carry on this tradition. Yea Red!

It was a good news bad news weekend for the hockey Paladins.

First the good news. The two points they earned in back-to-back overtime losses gives them a total of five points in the standings; they have played 11 league games. This is two points better than they earned all of last year. They finished the 2014-15 season with a record of zero wins, 23 losses and three overtimes losses for three points in 26 league games.

Now the bad news. Instead of earning two points they very likely could have, should have earned four points.

In the Friday night game against York Lions. The Paladins appeared to be headed to victory with a 5-4 lead as the seconds wore off the clock in the last minute, but York scored with just eight seconds left to send the game to overtime. The Lions scored the winner 2:15 into the extra frame.

Saturday was an even bigger heart-breaker at Constantine arena. RMC had a 5-2 lead over Brock Badgers after 40 minutes. With just over two minutes left in regulation time, Badgers narrowed the score to 5-4 . With just 1:03 left in regulation, they scored the equalizer sending the game into overtime. With just nine seconds left in the first sudden-death overtime, they scored the winner making the final 6-5 for the visitors.

Next two games for the Paladins; they travel to UQTR – Friday the 13th for a 7 PM opening faceoff. On Saturday afternoon they travel to Montreal to take on the Stingers at Concordia for a 2PM start. The Concordia game, in particular, will be a big one as RMC currently trails the Stingers by three points for the eighth and final spot in the standings. 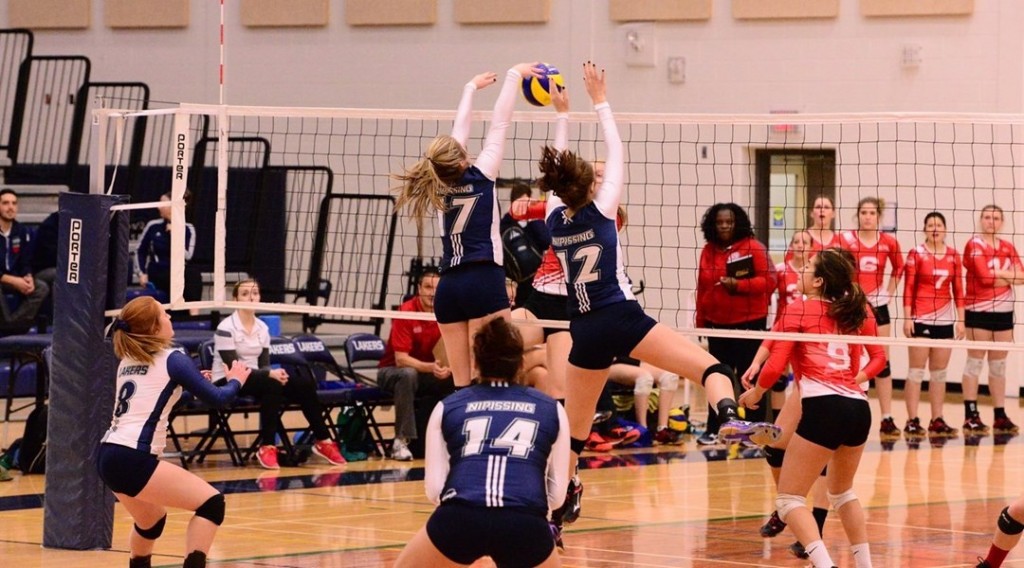 The women’s vollyball team earned a split over the weekend. The York University Lions came away 3-1 victory over the RMC Paladins on Friday night (Nov. 6) at the Tait McKenzie Centre. On Saturday they travelled to Nipissing and coasted to a 3-0 victory.

In the opening set, RMC walked away with a 25-17 victory to get ahead and grab the advantage.

The win was the first for the Paladins this season; their record is now is one and four. They next play at UWO and Windsor next Sat & Sun. 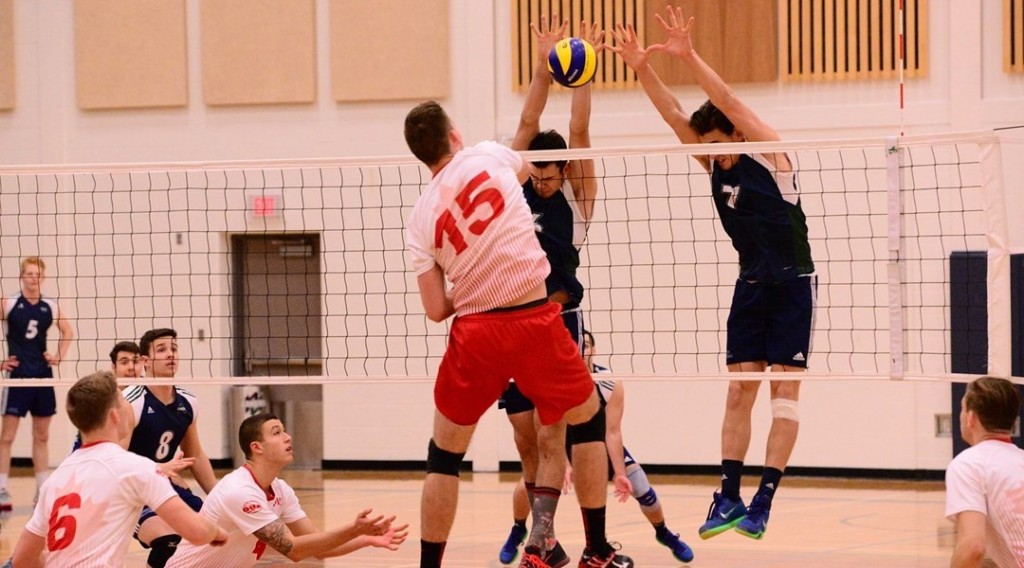 The Paladins lost in straight sets on Friday night (Nov. 6) at the Tait McKenzie Centre. Scores were 25-13, 25-18, Paladins brought their best in the third set and kept it close for the most part, but the Lions proved to be too much as they marched back and won 25-20.

In the Saturday match at Nipissing, from all reports the Paladins put up a gutsy effort. They won the first game 26-24; the second was also 26-24 but in favour of the home team. Nipissing won the next two reasonably handy by scores of 25-13 and 25-19.

Next weekend the men also travel to London and Windsor. 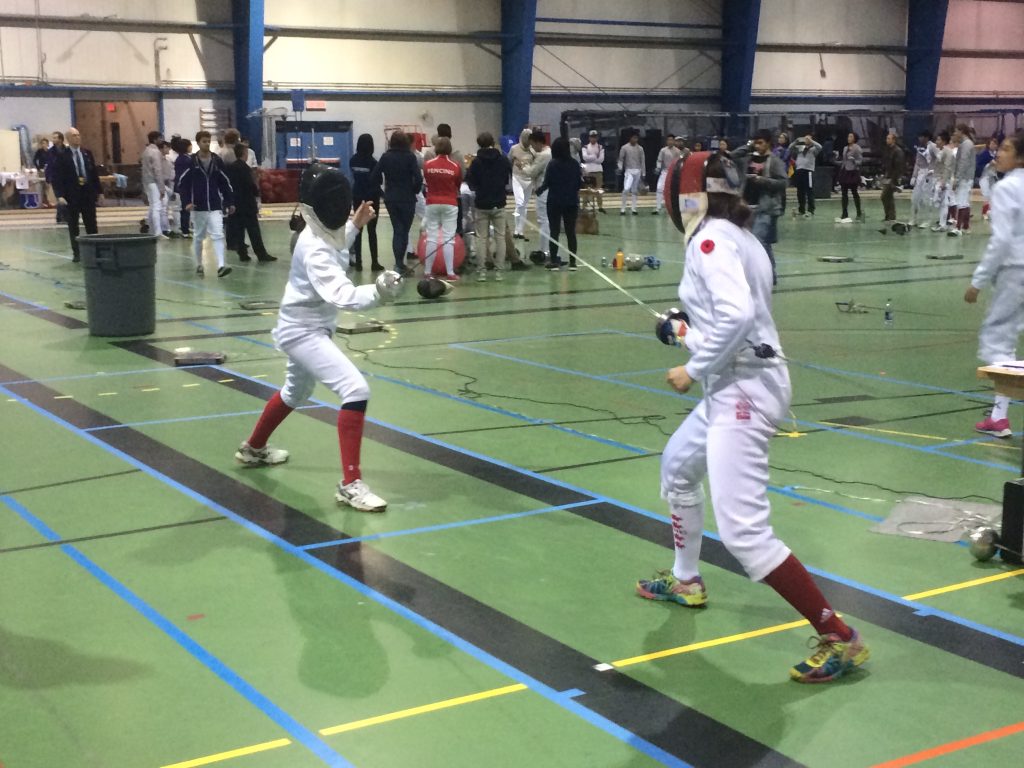 Last weekend (31 Oct – 1 Nov) The Royal Military College of Canada opened its doors to the RMCC Invitational Team fencing Event, which is an open competition to fencing clubs and universities alike. Approximately 125 teams competing in epee, foil, and sabre, both men’s and women’s categories, filled the KMCSC field house, not including the additional coaches, refs, and support workers.

The RMC Varsity Fencing Team was in charge of the set up, logistics, running of, and tearing down of the entire event, which was a unique opportunity to witness the workings behind a large and successful tournament such as this weekend, in addition to competing themselves.

Both the men’s and women’s teams had an A and B team in each weapon group, and as usual, distinguished themselves in the pools and rankings. Women’s Epee A team won silver; Men’s and Women’s Sabre, and Women’s Foil, placed 4th, and Men’s Epee and Foil placed 5th. The RMCC Fencing team placed 3rd in for the RMC Cup.

The team tournament setting is different from most, as instead of individual fencing matches, teams of three or four are fighting each other with a greater possible point range. This format allows fencers to step out of their comfort zone and try positions on the team that require greater tactics, patience, and skills than usual, as sometimes the entire team can be depending on one person to score the final hit that will give them the stepping stone into a gold medal match.

What 26565 OCdt Kyle English had to say about the weekend: He competed, as well as refereed some of the matches.

“This weekend was a huge success for the fencing team. Over 120 teams came out and competed. We placed well in all events, and the team did an exceptional job running the tournament.”

Over the Halloween weekend, the Royal Military College of Canada again had the privilege of hosting the Canadian Intercollegiate Sailing Association(CICSA) Fleet Racing Nationals. As a founding member of CICSA and significant player in the Canadian sailing scene, RMCC was well suited to the task of hosting 10 Canadian universities and conducting the final collegiate regatta of the year.

The club 420 sail boat is crewed by two sailors, measures approximately 4.2 meters, and is the dominate dinghy in collegiate sailing scene throughout North America. It is known for its mix of skill and ease of use, making it popular for sailing schools. RMCC is loaned 15 of these sporting platforms from HMCS Ontario for duration of the fall sailing season.

Sailing as a sport is greatly influenced by the weather and conditions on the water. This weekend demonstrated to Canadian collegiate sailors the various extremes Kingston has to offer for sailors. The first day of racing on Saturday saw a delay of race until after lunch due to winds less than 3 knots. A few races in very light winds were done after lunch, where teams were able to demonstrate the important low wind tactics which differ from other kinds of sailing. The second day on Sunday was almost a complete opposite. Winds were averaging 30 knots with gusts up to 35, very high winds for dinghy sailing. The winds were so high that some races had to be postponed with other races having competitors retiring due to inexperience with extreme conditions.

In the end, Queen’s University placed first followed closely by the University of British Columbia and McGill; RMC placed 6th out of the 10 competitors. The RMCC Sailing Team received compliments from coaches and competitors about the effectiveness of our hosting.

Competitors also enjoyed the services we provided them off the water including a social meet & greet at the Cadet Mess, billeting in college dorms, a daily BBQ provided by the Royal Military College of Canada Yacht Club, and the opportunity to experience the Royal Canadian Navy’s RHIB courtesy of HMCS Cataraqui.

The Sailing Team is looking forward to hosting CICSA again next year.