Both the Rugby and (W) Soccer trips were funded by the RMC Foundation. This past Sunday, March 1st, the RMCC Multisport Club hosted its third annual Aquathon. This event consists of a 750m lane swim and a 3000m track run. The event has continued to grow each year. The RMCC club was able to host 38 participants from RMCC, University of Ottawa, Queen’s University, Western and local independent athletes. Prizes were awarded for 1st and 2nd place finishers for male and female athletes. The club would especially like to thank Mr. Kommy Farahani and Sgt Todd Vanderklooster who represented both the Academic and Training Wings very well.

The executive board of the RMCC Multisport club would like to give a special thanks to all who volunteered from the Cadet Wing, including lifeguards and the First Response Team. The event would not have been possible without their support. As well, we would like to thank our generous local organizations that donated prizes, including Gears and Grinds, Ted’s Road & Tri, Lululemon Athletica, Feel Yoga, RMC Athletics, and the RMC Gift Shop.

Events such as the Aquathon help the club raise funds in order to participate in various events as well as equip the team with the required equipment needed to train. The club is now in their final stages of training as they plan to attend a Triathlon in sunny Florida.

For anyone interested in joining the RMCC Multisport club please contact Hannah Harrison, 26615, for more details. The club is open to anyone regardless of skill level and ability. 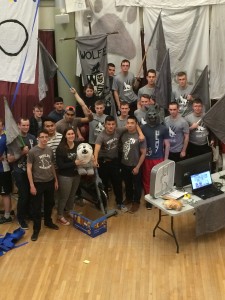 Officer Cadets Getting Their Bike on for Bike-A-Thon

This past Friday, March 6th, the officer cadets of the Royal Military College took to spin bikes in the New Gym on campus to raise money for the Soldier On foundation. For the next 24 hours each squadron monitored their respective spin bikes and made sure to jazz up their biking areas with tvs, computers and other entertainment to keep their bikers up through the long night. With each squadron member taking shifts, the twelve bikes stayed manned for the full 24 hours! Many squadron commanders and even senior members of the training wing took the time to come out and root for the many sweaty and tired bikers.

The Soldier On foundation provides services and support to retired or current military members suffering from illness or injury by encouraging them to lead active and healthy lifestyles.

The college raises substantial money every year for this initiative and this year was no different! The official numbers will be released within the next few days. The event was a great success and many members of the college could be seen biking their hearts out to promote an active lifestyle. The spin bikes have been packed away but everyone, cadets and officers alike, had fun with this annual fund-raising event.