The Annual Royal Military College of Canada Staff Ride was re-inaugurated three years ago when I returned to RMCC as a Division Commander. During my first tour at RMCC it was customary for RMCC senior commanders to travel to the major training CF establishments throughout Canada to both visit cadets in the “field” on course (a relative term for the Air Force and Navy) and conduct liaison visits with the Commanders and staffs of these schools. The aim or intent of these visits was of course to visit cadets but also talk to the staff of these training schools on specific RMCC cadet issues and to get a feel for the attitude of cadets on course and how well RMCC was doing preparing cadets for their summer training. It deemed important to build connections between the College and such entities as the Combat Training Centre in Gagetown, Canadian Forces Leadership and Recruit School in St Jean Quebec, Naval Officer Training Centre Venture in Esquimalt and of course 3 Canadian Forces Flying Training School in Portage Manitoba to ensure that our cadets were both well prepared and well motivated to go on course and that everyone (school staff and cadets) understood that RMCC staff very engaged in their performance on summer training and this would have a direct impact on their status back at RMCC in September.

The Staff Ride for 2012 was an unqualified success. First and foremost it allowed the Commandant BGen Tremblay, along with the new DCdts LCol Lemyre and College Chief CPO1 Davidson an opportunity to meet with and talk to cadets informally in their “service” environments. It is my impression that the cadets enjoy seeing their senior commanders on the ground and appreciate the effort (and time) the RMCC Command team has taken to visit. Just as important we learned that for the most part the cadets are highly motivated and well prepared for the challenges of their professional summer training. The hard work and commitment of the Training Wing to emphasize the “M” in RMCC has paid off and cadets are arriving fit and ready for the professional challenges that summer training represents. Whether it was on board an ORCA class patrol vessel on the waters off Victoria with NETPO, in the blue skies over the flat Manitoba prairie with the fledgling pilots on their Primary Flight Training Course, in the lush green woods of Gagetown New Brunswick undergoing high paced and physically demanding tactical instruction under the auspices of the the Combat Training Centre’s Infantry, Armour, Artillery and Engineer Schools or learning the basics of field leadership in the woods of Farnham in Quebec all the cadets were in high spirits and eager to take on the challenges of the summer. Of course, not all the information was one way. Seeing how the respective services go about training their officers is both interesting and instructive. Some lessons I learned include the fact that the Air Force cadets have maid service is more than made up by the professional requirements and stresses each cadet faces during ground school and on the flight line. Time on the Grob aircraft is precious and trainees must master the intricacies of flight quickly or face a radical career change. In addition, the bridge of a ship is no place for the fainted hearted or the slow of mind. It just seems like you are moving slowly but even at 15 knots, tide, wind, lurking rocks and fool hardy boaters (as well as some very large ferries) make the bridge a place with a very small margin for error. And finally as an Army officer it does my heart proud to see the fundamentals of tactics and leadership passed on to a new generation even more professionally than the manner I experienced it so long ago with an instructional cadre of battle hardened and committed officers and senior NCOs. One of the most important takeaways from the visit was the need for more “Touch Points” between the services and cadets and the Commandant has made it a priority to ensure our cadets continue to be exposed to their environments throughout the academic year. 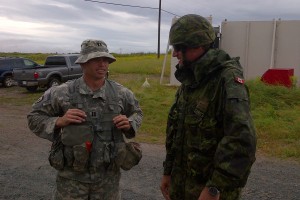 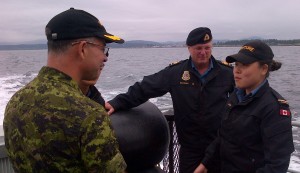 So all in all everyone learned and came to know (and understand) each other much better and this will go a long way in enabling our mutual task of preparing our cadets for the challenges that await them at the end of the RMCC experience. In the end, each cadet on summer training will return in September with a better knowledge of themselves, their peers and team mates and finally of their profession. In the words of the Commandant, “Knowing Yourself, Knowing your Team and finally Knowing your Stuff are the basic elements of professionalism and any cadet who learns this lesson over the summer is well on his or her way to a satisfying and successful career leading the way forward in the Profession of Arms.

Time and space and given the tight parameters of the Cmdt’s schedule it was not possible to visit every location where cadets are undergoing training this summer. Borden (the CF Logistics and EME Schools); Land Forces Central Area Training Centre (LFCA-TC) Meaford; and Val Cartier are three such locations.

Ed Note: Major Rob Parent is entering into his fourth year of his second tour of duty at RMCC. He has been a Sqn Comd (5 Sqn) and a Div Comd (C Div) as well as the SSO Ops and Trg and now the Chief Instructor (CI) for the past two years.

Major Parent, was the driving force in leading a groundswell of support from within the Ex Cadet community when varsity rugby was “dropped” from the college sports program almost ten years ago.

Varsity rugby was restored to its rightful place within two years and remains today as one of the most popular programs within the Athletic Department. Current and recent rugby players and coaches owe him a huge thank-you.

He has commanded at all levels within the Infantry including a Rifle Platoon, Armour Defense Platoon, Rifle Company, Support Weapons Company and finally as Commanding Officer of the Brockville Rifles. He has served overseas in Cyprus, Bosnia and Afghanistan. He has also served a tour with the Infantry School, 1 Canadian Divisional Headquarters and Land Forces Western Headquarters.

Most Cadets are not fooled by his typical gruff manner— they are aware that he’s really very kind and always looking out for their best interests. Behind his tough-talking exterior is a senior officer, who cares passionately about getting the best out of the officer-cadets and making sure that they are well prepared to serve Canada and lead troops. Those of us who know  him well, recognize his warrior spirit (typical of  a seasoned rugby player) and his willingness to go to the wall (or through it) in support of his people.