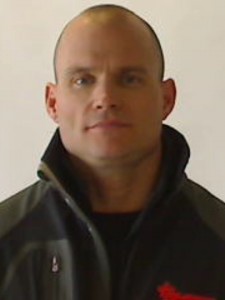 e-Veritas: Tell us a little about yourself. Where are you from? How did you end up at RMC as the Evaluation Coordinator and Physical Education Teacher?

Steve Mitchell: I was a base brat; twice in Petawawa and twice in Borden. In between those postings my father was stationed in Baden Germany. After he retired (1990), I lived in Barrie until moving to Kingston in February of 2011. Coming to RMCC is an interesting story. I got the job here via a Skype interview from Kandahar, Afghanistan. I was in KAF working for PSP as the Fitness Coordinator for the Canadian gym.

e-Veritas: What is your own fitness background? Were you a competitive athlete at one time? If yes, what was (is) your sport at what level did you compete?

Steve Mitchell: As for my fitness background, I played lots of sports in high school and it was then that I got into training. I also worked with the Physical Education and Recreation Instructor (PERI) staff in high school and university. I have a B Kin degree from the University of Western Ontario and also hold CSEP-CEP® and NCSA CSCS certifications. I am in my 17th year working in the fitness field, working in various capacities from clubs to my own business and eventually to PSP now for 7 years. As for competitive sports, I played AAA minor hockey as well as junior hockey.

e-Veritas: When did you know you wanted a career in fitness and sport?

Steve Mitchell: It was around grade 7 that I knew I would have a career in physical education in some shape or form, either as a teacher or a PERI. Unfortunately they disbanded the PERI trade in the military.

e-Veritas: You held a position at the PSP Training Centre in Borden. How did that experience prepare you for your job here at RMC as PE Teacher and Evaluation Coordinator? 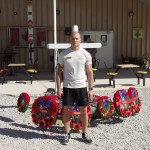 e-Veritas: Just prior to coming to RMC you were working with PSP in Afghanistan. What made you decide to take on that position? What was this experience like for you?

Steve Mitchell: My time in Afghanistan was well worth it. Obviously supporting the mission there was my main reason for going. It was a great experience, as well as humbling with the ramp ceremonies, Remembrance Day and being away from family at Christmas time.

e-Veritas: You will have been here a year in February 2012. What has been your favourite course to teach? Is there anything that you would like to teach more in the future?

Steve Mitchell: I would have to say teaching for sports like ball hockey, skating, and badminton are my favourite. Of course any opportunity to teach strength and conditioning is also a favourite. In the future I hope to teach more unarmed combat and rappelling courses for sure.

e-Veritas: Working with Officer Cadets on a regular basis, you can directly influence their performance in the physical fitness test. What are a few keys for cadets being successful with the PPT?

Steve Mitchell: As for success on the PPT I would say TRAIN, as well as watch your diet. Stay consistent and disciplined with both. All I can say is that you get out what you put in. Put some effort in and as an officer always lead by example.

e-Veritas: In your planning periods you are taking the Rappel Master Course with the IV Year OCdts in PE class. What has this experience been like for you?

Steve Mitchell: Yes the Rappel Master Course has been great. Jean is very knowledgeable and I have learned a lot.

e-Veritas: Because you work with most of the officer cadets, you get to know them as well as anybody. What three words best describe RMC cadets during physical Education classes?

Steve Mitchell: The best way to describe the OCdts during class, for the most part, is that they are motivated, eager to learn, and respectful. Those who aren’t know who they are and it will eventually show in other components here at RMCC, as well as in their career in the CF.

e-Veritas: Are there any athletes or coaches (in your past or present) that you admire? Why?

Steve Mitchell: As for athletes I admire, I couldn’t mention just one. One coach does come to mind for me though; my hockey coach in Petawawa. He was very hard on us, even though we were 8-10 years old. Those were probably my best years in hockey.

e-Veritas: You are an officer in the Infantry Reserves. What made you get involved in the military? Why is it important to you that you commit this extra time outside of your normal “day job”?

Steve Mitchell: Service to Canada was my main reason for joining the infantry reserves as an officer. It was the next best thing for me in that I am military as well as in the military phys ed field. I would have joined a long time ago, like I said earlier, had the PERI’s not disbanded. Also, the reserves are playing an important role in the defense of Canada (both domestic and deployed). It isn’t the “weekend warrior” mentality anymore.

e-Veritas: In February you will be on a reserve exercise that OCdts RMC are fortunate enough to be attending with your Regiment (PWOR). What are your thoughts on that? What kinds of things can they be looking forward to?

Steve Mitchell: Also with being in the reserves, it gives me some common ground with the OCdts. I have done training that some of them have done or will be doing in the future. As for the upcoming Brigade Ex in Fort Knox in February, the OCdts that were chosen to go should get some valuable experience. I know I am looking forward to it.

e-Veritas: What is the best part about working as a physical education teacher at RMCC?

Steve Mitchell: The best part of working at RMC as a physical education teacher is that it doesn’t feel like work. Yes there are parts of any job that you don’t like, and busy times, but I am working in the field I always wanted to. I can’t ask for more than that.