RMC Cadets Get Poked and Swabbed for a Good Cause

RMC has a long tradition of giving back to the community, and on the afternoon of Monday 23 Jan 2012, this tradition continued. As has been done many times before at the College, a blood donor clinic was held in the New Gym at Yeo Hall. New this time, however, was the opportunity for cadets to register for the “One Match: Stem Cell and Marrow Network.” Individuals registered on this network supply a DNA sample which is analyzed and used to determine where in the registry of donors the individual fits. In the event that the sample suggests the individual could be a suitable donor for another individual in need, further testing is then done to see if this is indeed the case.  This registry helps to make the process of finding suitable donors for patients in need more efficient, and that efficiency can mean more patients saved. As was advertised around the campus in the days leading up to the clinic, the One Match Registry’s greatest need was male donors age 17-35. RMC’s gentlemen cadets fall well within this age bracket, and given the College’s tradition of helping out the community, it was not surprising that the Cadet Wing stepped up to the plate once again. By the end of the clinic, more than 60 cadets, all within the target age group, had stopped by to give a DNA sample. OCdt (IV) Richard LeBlanc, 25415 (photo left) was among those who contributed, as were OCdt (I) Zhi Zhen, 26348, and OCdt (I) Jeffrey Vey, 26343 (photo right above).

More photos from the clinic: 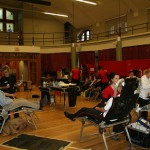 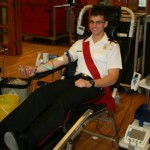 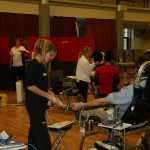 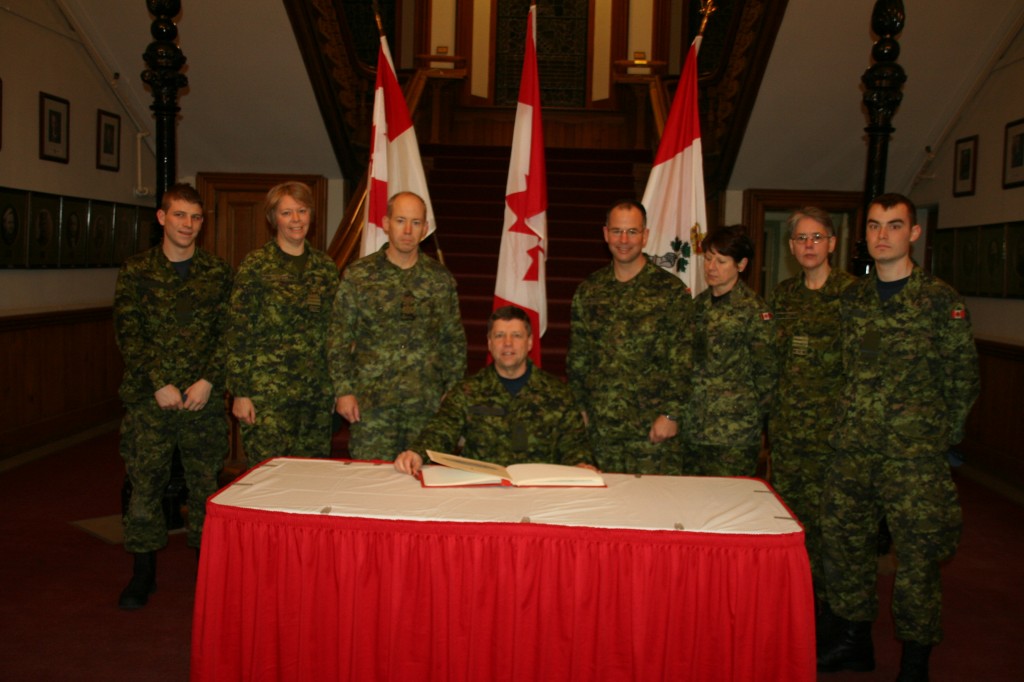 On Wednesday, 25 Jan 2012, Brig Gen Karl McLean, Chaplain General of the CF, paid a visit to RMCC. Among other things, while here he signed the official guestbook and gave a presentation to the Third and Fourth Year classes. 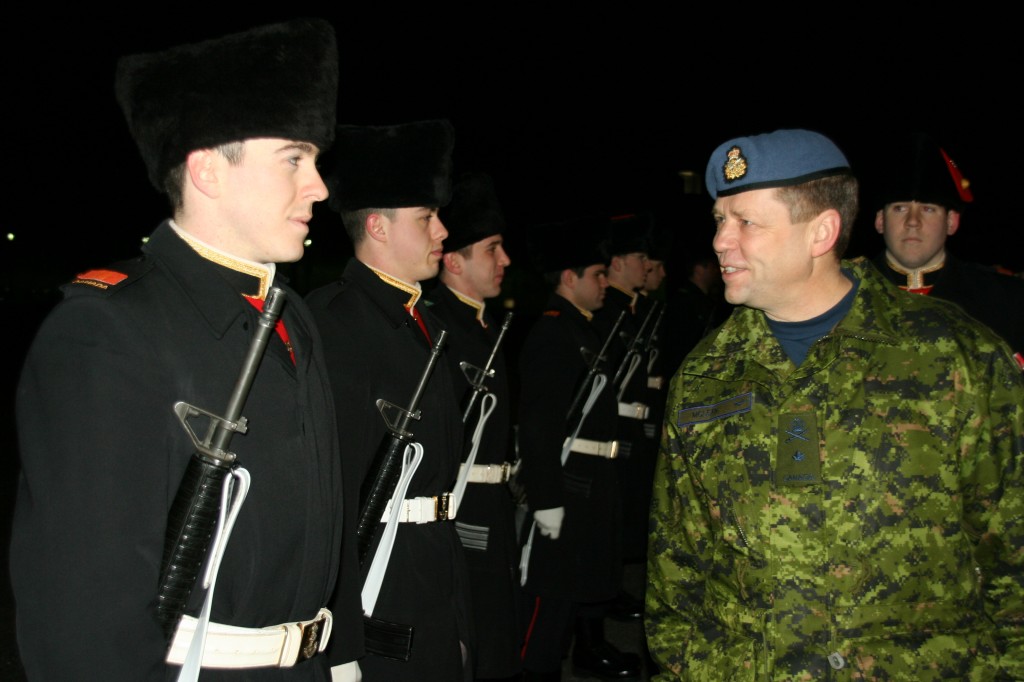 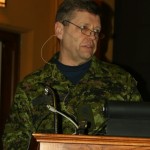 On the morning of Wednesday January 25th, third and fourth year cadets were briefed by the CF Chaplain General, BGen Karl McLean, as part of the ‘Commandant’s Professional Series’. The Series, implemented this academic year by BGen Tremblay, is a set of lectures intended to educate cadets on the nature of the CF, particularly elements of the organization that cadets may not be exposed to at RMC. The Series was very successful through the first semester; the first brief of the new year was no exception.

BGen McLean’s lecture, ‘The Spiritual Life’, focused on the meaning of spirituality and its importance in military leadership. He defined spirituality as authentic human living, centered on such dimensions as virtues and relationships with others. The emphasis of the lecture was the importance of leading a spiritual life to having effective leadership, highlighting its influences on unit cohesion, group morale and decision-making skills. Throughout the lecture the BGen emphasized that religious following is not necessary for a spiritual life, but is a great source of moral direction.

The Chaplain General then introduced LCol Leslie Dawson, the Senior United Church Chaplain. The LCol focused on the importance of religion in war, describing its relevance in almost every conflict today. She emphasized the importance for future officers to be understanding and sympathetic to all faiths, especially those prevalent in areas of CF deployment. 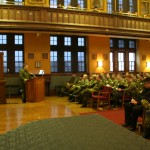 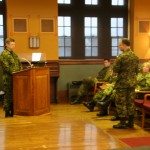 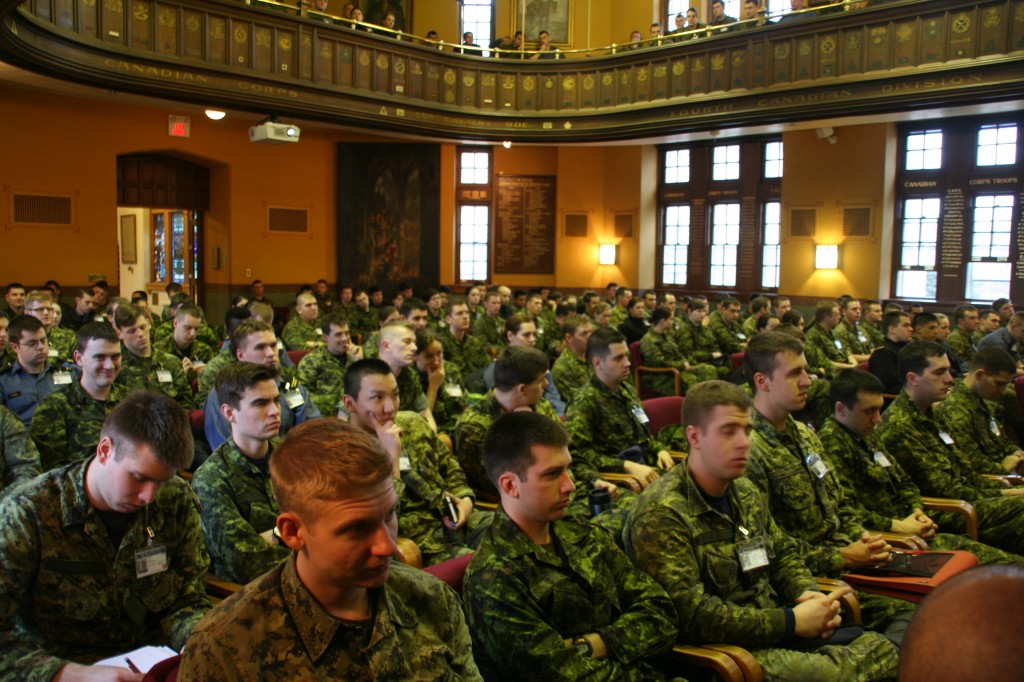 More photos from the event: 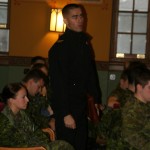 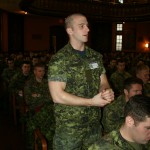 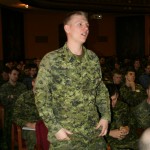 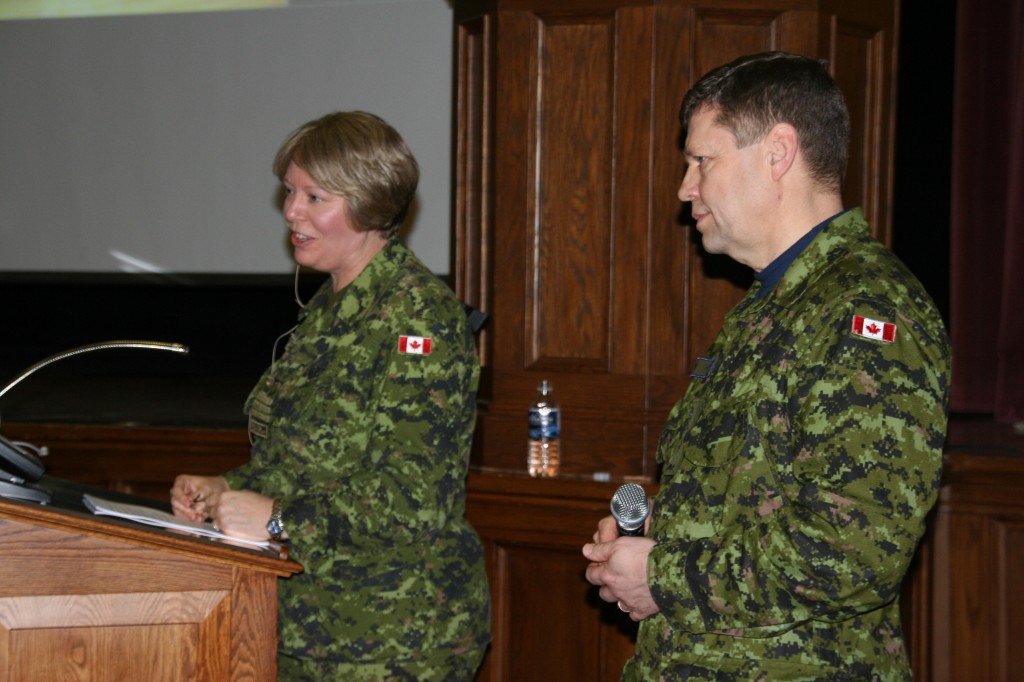 The next Cmdt Series brief will take place on February 8th with a presentation from LGen Stuart Beare, commander of the Canadian Expeditionary Force Command.

Cadets Get Busy During Training Weekend 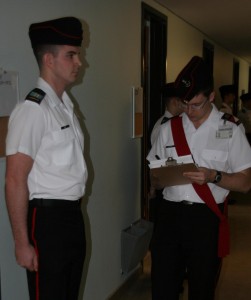 LCol R.W. Ermel, CD, Commandant of the Canadian Forces Leadership and Recruit School, came to RMC on Saturday, 28 Jan 2012, as part of the January Training Weekend. Along with members of his staff, he briefed members the First Year class on what to expect when they go to the school this summer for their Basic Military Officer Qualification course. During his presentation, LCol Ermel expressed his confidence in the cadets, saying that because of their time spent at RMC, they are “already ready for the course.” He did stress, however, that the cadets need to “come prepared for the challenges they will face.”

The January Training Weekend also included a full room and dress inspection. Cadets and their rooms were inspected by senior cadets under the supervision of senior NCMs from the Training Wing Staff. At left, OCdt (IV) Nevin Hotson, 25192, takes notes as he inspects OCdt (II) Evan Fay, 26073.